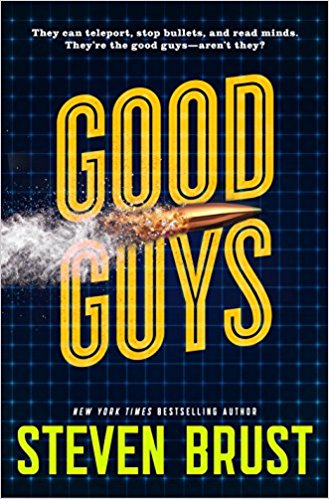 Donovan was shot by a cop. For jaywalking, supposedly. Actually, for arguing with a cop while black. Four of the nine shots were lethal--or would have been, if their target had been anybody else. The Foundation picked him up, brought him back, and trained him further. "Lethal" turns out to be a relative term when magic is involved.

When Marci was fifteen, she levitated a paperweight and threw it at a guy she didn't like. The Foundation scooped her up for training too.

"Hippie chick" Susan got well into her Foundation training before they told her about the magic, but she's as powerful as Donovan and Marci now.

They can teleport themselves thousands of miles, conjure shields that will stop bullets, and read information from the remnants of spells cast by others days before.

They all work for the secretive Foundation...for minimum wage.

Which is okay, because the Foundation are the good guys. Aren't they?

If you take Magic Ex Libris by Jim C. Hines SPI Files by Lisa Shearin, Paranormal Scene Investigations by Laura Anne Gilman, and mix them with a bit of cold war spy fiction and a heaping helping of noir, you’ll get something like Good Guys.

Both SPI Files and Paranormal Scene Investigations involve organizations that investigate and clean up after crimes in magical versions of our own world. Libriomancer and its Magic Ex Libris series are part of the mix because in that version of our world, magic is hiding in plain sight, and part of the duty of the magical organization is to protect the world from the knowledge that magic exists. Add in that the libriomancers are fighting a conspiracy both from without and from within, and the magic side of Good Guys is pretty well covered.

Because the story in Good Guys follows one particular operations team for the mysterious and magical Foundation as they chase around the world making sure that a magical serial killer does not expose the existence of real magic in the world, even as they investigate the patterns to see if they can both figure out what his game is – and catch him before he reaches its end.

Or his. Or theirs.

The more they discover about the whys and wherefores of the crime spree, the more they have to ask themselves, are they really the good guys? Or are they just battling their own bureaucracy and running around the world on behalf of an organization that is no better than the one they fight against.

Escape Rating B+: It’s been a long time, possibly too long, since I read anything by Steven Brust. I’ll admit that I was expecting a bit more snark. (If you love snarky fantasy with an epic-ish/urban-ish feel, his Vlad Taltos series (start with Jhereg) is marvelous reading crack as long as you don’t try to swallow too many of them at once.)

The story in Good Guys is a fairly deft mixture of mystery/investigation with magic, and very much a part of the urban fantasy tradition of magical detectives solving mysteries in a contemporary world that is just a bit sideways from reality.

What keeps the reader glued to their chair is the way that the whole thing works. Because we’re both following this one rather eclectic, or possibly eccentric, team of investigators while also watching them plumb the depths of their own organization – and not liking what they find in those depths.

There’s a lot of murk, and the frequent changes in perspective between the team leader, the criminal, the new recruit and the bosses on all sides of this mess occasionally muddies waters that are already pretty clouded. While the reader gets invested with Donovan and his team, the perspective shifts sometimes make it difficult to retain that focus. Especially as the author attempts to keep the reader in the dark while showing the criminal’s own thoughts and feelings. It might have worked a bit better, or it would certainly have worked a bit better for this reader, if we’d stayed with Donovan.

Which does not mean that the story wasn’t absolutely fascinating, and a whole lot of fun – because it certainly was. The investigation was every bit as twisting and convoluted as the best mystery, while the magical additions gave the forensic side of the equation lots of new toys to play with. Of course, that magic also gave the criminals new toys to play with as well.

And Donovan’s constant fight with, and continued attempts to work around, the bureaucracy that is as big a problem as it is a game, will find resonance with anyone who has worked in an organization containing more than three people. Paper-pushing procedures and internal politics are enemies that we all face.

In the end, the question of whether Donovan and his mysterious Foundation are really the good guys remains an open one. But their search for the answer is a whole lot of fun.