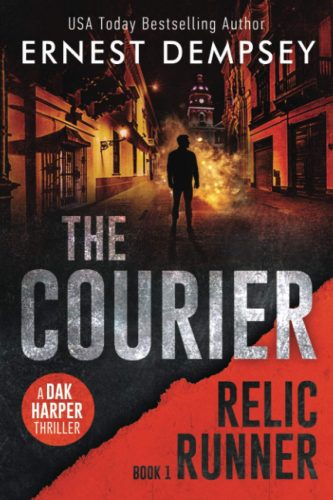 Former Special Forces operator Dak Harper needs a job.
Out of work and on the run after a shocking betrayal by his brothers-in-arms, the ex-Special Forces commando hasn’t stopped moving for months.
He can’t. Some of the same soldiers who left him for dead in the Middle East still want his head. And they’re getting closer.
So far, he’s been lucky. But Dak is low on money and nearly out of time.All he needs is an easy gig. A place to lie low, bank some cash, and quietly figure out his next move.
That’s not exactly what he finds.
Some rich kid with more money than he knows what to do with wants to open his own museum. But first, he’s got to fill it, and that’s where Dak comes in.
Not sure if his gift for hunting bad guys will translate to finding priceless artifacts, Dak’s willing to give it a shot. He needs this job. The kid will pay him a lot of money and ask no questions.
Before he knows it, Dak’s on the first flight to South America, chasing his big payday. But Dak’s about to trade one set of problems for something even worse: the deadliest mission of his life.

The Courier is the first book in an action adventure thriller series featuring former Delta operator Dak Harper. A man on the run, but not from a crime he committed. Dak is running from a crime he didn’t commit – or rather from the man who actually did commit that crime and is pissed as hell to have it pinned on him. Particularly after all the trouble he went to in his failed attempt to put Dak in that frame. 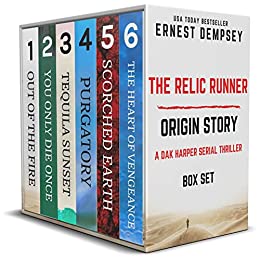 (That origin story is told in a 6-part novella series, descriptively titled The Relic Runner Origin Story. The reader does get enough hints of those events to slip into this book fairly easily, but I’ll probably read those when I get a round tuit because I always like more background.)

So Dak is open to a job that will take him out of the country, and temporarily out of the reach of the man who wants him dead. Even if it’s a job that might add more than a few names to that list of people who are out to kill him.

But the job he picks up at the beginning of this story is nothing like he ever expected. It’s also where that passing reference to Indiana Jones comes in. Twelve-year-old Boston McClaren has parlayed his knack for video gaming into an extremely lucrative career. And he plans to use some of his legally gotten gains to do something of dubious legality – or, at least, to pay someone, hopefully Dak, to do something of dubious legality on his behalf.

The young entrepreneur hires the disgraced Delta operator to go to Lima, Peru and re-appropriate, by whatever means necessary, a priceless relic purchased on the dark web by the cartel kingpin who runs everything shady in the city of Lima.

Considering that everyone in Lima from the Mayor on down is at least partially on that kingpin’s payroll, Dak is going to have to go through a lot of people – one way or another – to “find” the relic that he’s looking for.

The kingpin needs to go down, the city needs to get out from under his thumb, and that relic needs to get into the hands of a museum where many, many more people will be able to appreciate it and its history.

Dak Harper is looking forward to taking out the trash. Unless he ends up in it.

Escape Rating B: I picked this up on a whim because a writer whose work I really like recommended this author and the series. The comparisons in that recommendation were to Indiana Jones, Dirt Pitt And Doc Savage. While I’m more familiar with Indy than the other two, I’ve certainly heard of all of them. I have to say that I was a combination of intrigued and confused, but decided it was worth a try, if only because I enjoy the work of the author providing the recommendation so damn much.

Having finished The Courier, I think all of those comparisons are dead wrong, although the book made for a terrific, edge-of-the-seat read. But the cinematic character that Dak Harper resembles more than any other isn’t Indiana Jones – it’s Nathan Drake. And not so much from the movie as from the game series, also titled Uncharted.

And that includes the level of violence. You mow down a LOT of bad guys while you’re pretending to be Nathan Drake, including a whole slew of drug dealers, gun runners and kingpins of cartels dealing one, or the other – or both. Dak’s origins are actually a bit less shady than Nathan’s, but neither of their hands are exactly clean.

Howsomever, at least in this first outing, the Relic Runner as a series does bear a sharp resemblance to that video game. There is a story, but the story is in service of watching Dak Harper outsmart all of his opponents and essentially mow them down in one way or another. The conditions he observes in Lima are heartbreaking and even horrific, and the reader does reach the point of wanting to see all those bastards go down and go down as hard as possible while Harper does his best to avoid as much collateral damage as he can.

If you see it resembling a certain type of action-adventure video game – like the Uncharted series or even Tomb Raider – it’s easy to get caught up in the rhythm of the dropping of the bodies and just go with the action. But if you’re looking for a story with any kind of depth, you’ll probably be disappointed. 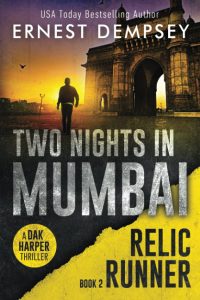 I wasn’t. I was looking for a bit of mindless adventure being led by a character who was superlative at his job and I got exactly what I wanted. We’ll see if that’s true in the next book in the series, Two Nights in Mumbai, the next time I’m in this kind of mood.

Which, admittedly, is the kind of mood where I either want to vicariously kill things by playing a video game – or read about someone else doing it in a story that – you guessed it – resembles a video game.