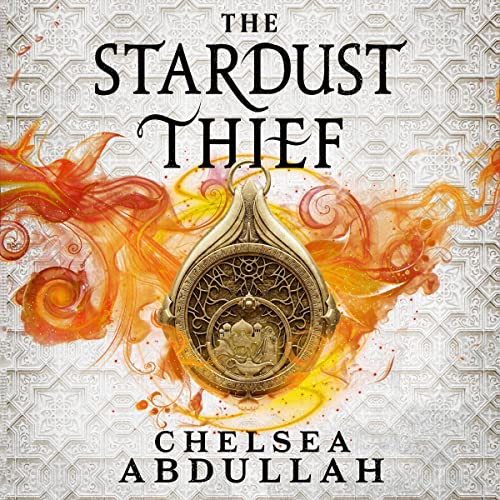 Inspired by stories from One Thousand and One Nights, this book weaves together the gripping tale of a legendary smuggler, a cowardly prince, and a dangerous quest across the desert to find a legendary, magical lamp.
Neither here nor there, but long ago . . .
Loulie al-Nazari is the Midnight Merchant: a criminal who, with the help of her jinn bodyguard, hunts and sells illegal magic. When she saves the life of a cowardly prince, she draws the attention of his powerful father, the sultan, who blackmails her into finding an ancient lamp that has the power to revive the barren land—at the cost of sacrificing all jinn.
With no choice but to obey or be executed, Loulie journeys with the sultan's oldest son to find the artifact. Aided by her bodyguard, who has secrets of his own, they must survive ghoul attacks, outwit a vengeful jinn queen, and confront a malicious killer from Loulie's past. And, in a world where story is reality and illusion is truth, Loulie will discover that everything—her enemy, her magic, even her own past—is not what it seems, and she must decide who she will become in this new reality.

“Neither here nor there, but long ago…” or so the storytellers begin their best tales. Of which The Stardust Thief is most definitely one.

Loulie al-Nazari is the legendary Midnight Merchant, an infamous smuggler of magic relics left behind in the world of humans by the powerful, dangerous and deadly jinn. But she has a secret – of course she does. She finds the jinn relics that she sells to discerning buyers at extravagant prices with the help of a jinn relic of her own – along with the able assistance of her taciturn bodyguard, Qadir. Who is one of the hated and feared jinn, hiding in very plain sight. Only Loulie knows Qadir’s true identity – not that she knows even as much of that identity as she believes she does.

Mazen bin Malik is the second son of the Sultan. He’s been sheltered to the point of imprisonment for most of his life, while his older brother Omar has become their father’s heir, not just to the throne in the hazy future, but even now to their father’s position as the leader of the infamous ‘Forty Thieves’ – jinn killers who steal and murder on behalf of their leader, the prince they call ‘King’.

Mazen would rather be one of the storytellers in the souk. At least that way he’d have some freedom – and some purpose.

They shouldn’t have anything in common – a smuggler and a prince. But they are both people who hide their real selves behind masks; the Midnight Merchant is a persona Loulie puts on, while Mazen bribes the palace guard so he can escape the confining safety of his palace prison.

They meet in the souk, where Loulie is wandering incognito as Layla, while Mazen is pretending to be Yusuf the storyteller. Where Mazen is ensorcelled by a jinn, and Loulie can’t resist following their trail where it leads.

It leads to the palace. Not directly, and certainly not in a way that either expects. But the Sultan coerces the Midnight Merchant into finding a jinn king’s relic for him, deep in the desert, and sends his older son, Omar along to ‘protect’ her – and ensure she comes back with the prize.

But Omar has schemes of his own, so he trades places with Mazen, using a relic to switch their identities. He sends one of his ‘Forty Thieves’, Aisha bint Louas with the disguised prince as a bodyguard.

As the adventure bleeds into one danger after another, and their journey comes to feel more like a trap than a quest, they begin to learn the hidden truths about themselves and each other. Only to discover that not a single one of them is what they seemed, or what they thought they were, when they set out.

And that as many times as each of them promises themselves and each other that they will not run away – at least not this time – they are forced to accept the truth that “he (or she) who runs away lives to fight another day.” If only because they must in order to prevail against the powerful forces, both human and jinn, who stand in their way.

Escape Rating B+: I’m having the same kind of mixed reaction to writing this review as I did to reading this book. Which doesn’t explain anything at all, does it? The dilemma I’m having is that I loved the story, but did like or empathize with many of the characters, and it’s a real conundrum.

The story is utterly fascinating. The jinn (or djinn or genies) are such powerful mythical and mystical creatures. This story posits a much more nuanced interpretation of the jinn, and much of what happens is based on a fundamental dichotomy in that interpretation. Humans have been taught that jinn are dangerous and evil and hate humanity. Jinn, on the other hand, have an entirely different set of myths and legends about the first encounters between themselves and humans. Encounters in which the humans coveted the jinn’s powers and murdered them indiscriminately, as they still do. Some jinn do kill humans, but it’s more often in self-defense than outright murder.

As the story continues, it certainly seems like the jinn perspective is more likely the true one – particularly based on the behavior of the humans that Loulie and Mazen meet along the way. 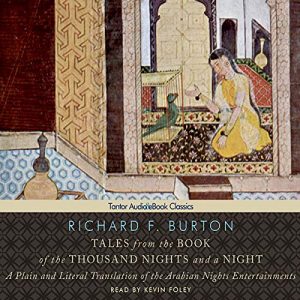 But the story is a nearly endless ‘out of the frying pan into the fire’ kind of story, as one near-death adventure – and escaping therefrom – leads directly into another. Much as the tales that Shafia – who we know as Scheherazade – told to the Sultan to keep him from killing her. This adventure is clearly intended to remind readers of One Thousand and One Nights, as it should. Shafia was Mazen’s mother, and the Sultan of the famous story was his father.

It’s the truth of that tale, as well as so many other truths, that Mazen, Loulie and their companions must discover on their dangerous quest.

Speaking of the party, that’s where I felt conflicted. The story is told in the first person, from three different points of view; Loulie, Mazen and Aisha. I listened to the audio for about 90% of the book, and the three narrators made the differences in their perspectives quite clear. They all did an excellent job of portraying their respective characters. The problem I had was that I found that both Loulie and Mazen spent a lot of time wallowing in self-pity, self-flagellation and adolescent angst. Not that their situations weren’t more than worthy of some considerable wailing and gnashing of teeth – because they are in deep sand up to their necks. It’s more that because the story is told from inside their heads, it got repetitive. If I’d been reading instead of listening I’d have skimmed through those bits.

So I loved the adventure. This story is a thrill-a-minute ride with plenty of fascinating exploration of this world. The way that the legends come to life was absolutely riveting. But the one character I really liked and wished I had more of was Qadir, and he’s the one really important perspective we don’t have in the first person – or nearly enough of at all.

But I have hope – in a slightly twisted way. The Stardust Thief is the first book in a trilogy, although the second book doesn’t even have a title yet, let alone a publication date. It can’t come nearly soon enough because this first book doesn’t exactly end. Like the other adventures in this book, like the adventures Shafira told the Sultan, this one ends just as our heroes have jumped out of yet another frying pan but are still in freefall before they land in the inevitable fire.

It’s going to be a long, nail-biting wait to find out how hot things get in the next installment!