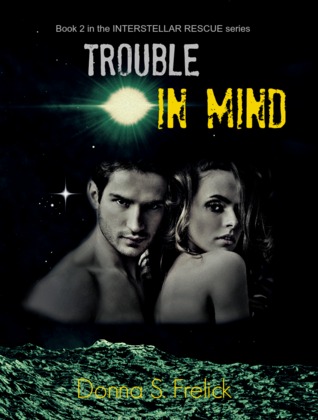 She couldn’t get him out of her mind—and that’s when the trouble started.
FBI Special Agent Alana Matheson is good at her job, despite a past that would make even a seasoned agent cringe. She has no time for the outside help the victim’s family has brought in on a kidnapping case, no matter how good-looking he is.
But galactic tracker Gabriel Cruz is no ordinary private investigator, and the skills he brings to the job will save both their lives. Because Lana and Gabriel are not the only ones seeking an unusual little boy and his mother. Their rivals in the chase are not of this world, and only an alliance built on the bonds of love can ensure that Lana and Gabriel beat the alien hunters to their prey. 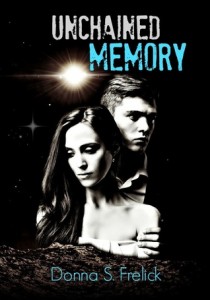 I read and reviewed the first book in this series, Unchained Memory last year on Reading Reality  and Weirde reviewed it in an issue of Sci-Fi Romance Quarterly.  I think I liked the first book more than Weirde did, but as always, your warp speed may vary.

I was certainly looking forward to seeing where the author took her exploration of alien abductions, from the perspectives of humans who remember the trauma, the aliens who exploit those humans, and the good guys who want to shut the whole thing down.

For those who love the X-Files, there are certainly elements of that kind of “truth is out there” mystery. Both that there really are aliens doing unspeakable things to us, and that our government is not only covering up that fact but also committing some unspeakable acts of its own.

The truth is out there, and it doesn’t want to be found.

The story in Trouble in Mind takes place several months after Unchained Memory, and uses the characters from the first story to hook us into the second. Asia Clarke is one of the few humans who is immune to both the alien and human mind-wipe process. (Retcon doesn’t work on everyone). Her husband is the psychiatrist who allowed her to access her hidden memories. Their adopted son, like Asia, is a survivor of the aliens’ experiments. His new parents just don’t know what experiments Jack was subject to.

As this story begins, Asia and Jack are kidnapped. None of the witnesses are mind-wiped, this action occurs in plain sight in broad daylight. The cops bring in FBI detective Alana Matheson to work the kidnapping. The presumption is that the husband is the real target, that he pissed off some bad people who are holding his wife and son as collateral damage. They are sure that if they dig deep enough into his past, they will find just where and how he’s “dirty”.

Ethan calls in Sam and Rayna, Asia’s interstellar rescuers from Unchained Memory. And they, in turn, bring in Gabriel Cruz, an interstellar recovery agent. While none of them are sure exactly who kidnapped Asia, they are certain that it wasn’t Ethan, and that it was connected to her time in alien custody. They also assume that Asia is the target, and that Jack just wouldn’t let his mother go.

They are about half right. The people who took Asia and Jack were just after Asia. But there are intergalactic forces right on their tails, chasing after Jack. At first, it doesn’t matter who is after whom, as long as Gabriel can track down Asia and Jack and retrieve them from their kidnappers.

Until it all goes pear-shaped. Gabriel falls for the cop, and his brothers come chasing after Jack, and him. And the fate of the universe turns out to be held in Jack’s small hands.

Escape Rating B-: I struggled with the first half of this book. There is a lot going on, and it didn’t feel clearly explained. We don’t get enough time with any of the various factions to really understand who is after whom and for what purpose.

Some of that is still true at the end, but the action in the second half is fast and furious enough that it carries the reader past some of the less-explained bits.

The story begins with Ethan, Alana and Gabriel as our points of view. The story they follow is pretty clear. Asia and Jack have been taken, Ethan wants them back, and because he knows more than he can possibly tell the cops, he brings Sam and Rayna in. The cops are rightfully suspicious of any of Ethan’s friends, and of Ethan. That the husband is responsible may not be true in this particular case, but it is the way to bet.

While Alana and Gabriel are still marking territory as far as who gets to do and see what in Alana’s investigation, we see two other points of view. A high-level government official on the planet that relies on human slave labor is planning a coup, and his assistant is secretly spying on him for the resistance.

And Gabriel’s half-brothers, who appear to be evil personified, are dragged into the case by that government official to track down Jack. Which means we have no clue about who grabbed Asia.

There is also a lot of unexplained and unrelieved evil going on. It’s not that Gabriel’s half-brothers are the scum of the galaxy, although they are, it’s that they inherited their scum of the galaxy gig from their shared father, and that they seem to revel in it. The older one at least comes off as evil for evil’s sake.

We also don’t see quite enough of the governance of that mining planet to get fully invested in that plot twist either. While the official is evil for aggrandizement sake, we don’t get quite enough there, either.

And we follow along with Asia and Jack as their kidnappers take them across the country, still with no idea who went after them. Because it wasn’t either Gabriel’s brothers or the Mining Planet Official.

All of the above setup felt like both too much and not enough for this reader. There wasn’t enough background for the various interstellar factions, but they were all unrelievedly grim. And brutally evil. Asia and Jack are in a deep well of loss and depression, because they are in the middle of being kidnapped and are certain of their upcoming death or enslavement. It felt like too many bits of awful stuff without hope or light or in some cases, much explanation or backstory. Gabriel and Alana are at the beginning of several long and nasty fights, because they need each other (and want each other) but are hedged about by too many dangerous and necessary secrets.

In other words, the first third or so was darker and grimmer than I like.

It all comes together in a place and a way that is surprising and interesting but again, not very well explained. When Asia, Jack, the kidnappers, the intergalactic scum and Gabriel and Alana all meet up for one final pitched battle, they are in the middle of Navajo country, and get help from the spirit world in ways that are difficult to follow, but ultimately result in changes for the better.

I think I understood more of what was going on at that point from my earlier readings of Tony Hillerman’s books than anything that was explained in the story. The last battle was epic, but the mythology and legends that set it up aren’t all in this text.

And on that other hand, part of the story is the triumph of not just good over evil, but also of love over hate. Not just Jack’s love for his adopted parents, but also the love that Gabriel and Alana find with each other.