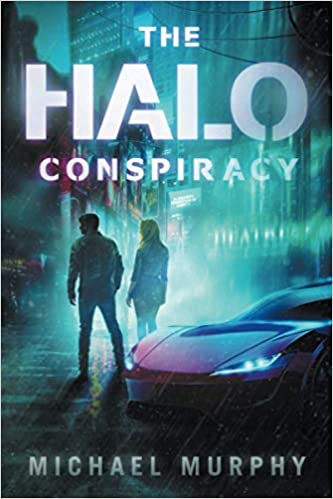 A ruthless technology company threatens to reveal Project Halo, a scientific breakthrough that will change humanity forever. Layers of secrecy conceal cutting-edge robotics, artificial intelligence and even rumors of synthetic humans. Before scientists can correct flaws that threaten the program, someone or something murders the brains behind the project.

Michael Murphy's witty fast-paced sci-fi mystery introduces Lucas Nash, a gritty, by the book homicide detective thrust into a world he always avoids, high tech. He sifts through a maze of suspects; Rachel, a spirited intern, a brute of a security chief, a treacherous woman, the murdered man's partner, and two ambitious Army officers, one found dead in the arms of a married schoolteacher, and a Colonel who can't be found.

A media starved religious leader warns the world against the evils of technology with his beautiful assistant, Lucas's one-time flame. Before uncovering the killer's identity, an unlikely romance threatens to derail the investigation and end Lucas's career. With pressure mounting from his superiors and the government, Lucas must set aside his feelings and solve the murder before technology makes him and humanity the next victims.

This near-future mystery/technothriller begins in the way that all mysteries do – with a dead body. And then another. Along with, of course, a detective to investigate whodunnit.

It turns out to be “who done them?”, because the long arm of coincidence doesn’t stretch to two unrelated deaths at the opening of a detective story.

It’s with that second death, however, that the story draws the second arrow in its metaphorical quiver. The first case looks pretty ordinary, at least at first with its fairly obvious triangle of absent husband, cheating wife and dead one-night stand lying in a pool of his own blood with two gunshot wounds.

But that second body that Detective Lucas Nash goes to examine – that’s entirely different. Because it looks like natural causes, but sets enough of the hairs rising on the back of Lucas’ neck to make him suspicious that it isn’t.

Of course it isn’t. And that’s where this case really begins to twist in the mind of both Nash and the reader.

We’re all presented with a series of red herrings that at first don’t look even slightly pink.

The late Dr. Beltran works for an ultra-secretive and highly profitable company that creates artificial intelligence solutions for both computers and robotics. The company is the financial mainstay of the little town of Green River, and an economic engine for the entire country, with its automated and artificial intelligence tentacles in many, many places. They even have big contracts with the Department of Defense and the Department of Homeland Security.

And they have a crack security team that is out sweeping the late Dr. Beltran’s house in the middle of the night in order to cover up something really big. Something possibly really illegal, or unethical, or immoral, or all of the above.

Lucas Nash is determined to get to the bottom of this mess – no matter what he has to compromise along the way. Or what might try to compromise him.

Escape Rating B: I picked this one up because I really enjoyed the author’s Prohibition Era Jake and Laura mystery series (start with The Yankee Club because the whole series is a lot of fun!) So I knew going in that I’d like this one.

What I didn’t expect was how much the setup would remind me of J.D. Robb’s In Death series.

It’s that Lucas Nash’s world, like Eve Dallas’, is set in a future so close that we can see it from here, while being just far enough out that extrapolating future technology from present development creates a world that is recognizable enough to not need a whole lot of technobabble while being just far enough away that the differences that do exist don’t feel so much science fictional as simply logical.

Or to put it another way, this book takes place in 2038. All of the adult characters in the story have already been born. Not just born, but many of them are in high school during the pandemic that we all sincerely hope is ending right now in the real world.

So a future we can see from here and imagine living in fairly easily, and that makes a lot of the SF in the story easily accessible to readers who don’t read much SF.

At the same time, one way of looking at the case is that it’s wrapped around some very high tech concepts that already exist today – artificial intelligence and robotics. Along with a real-world application that has been the stuff of SFnal-tinged nightmares for decades. If AI and robotics get to be good enough, will the government use them to create supersoldiers? Can anyone seriously imagine that they won’t?

After that, the question of how fast we get to Skynet and the Terminator starts to loom pretty large. But we’re not there yet even in 2038 – not that it stops everyone from thinking about it. And making terrible jokes about it.

The technology here is just a means to an end. It’s fascinating and it’s very easy to get wrapped up in it but it’s the human dimension of the suspense that keeps the reader turning pages. Because all those red herrings at the beginning that aren’t even pink? This story is red herrings all the way down, to the point where Lucas – and the reader – go haring off on one false lead after another, thinking that we know what’s REALLY going on only to learn that we’ve been heading down a primrose path – AGAIN – and that we have to re-think everything we thought we had figured out.

In the end, all of the motives are human ones, whether the perpetrators are themselves all human or not. And in the middle of it all, there’s Lucas Nash, who doesn’t do all that well with the technology that surrounds him.

But who can figure out what makes people tick – or what ticks them off into murder – perfectly well with his own, purely human, intelligence. No matter how anyone ends up defining “people”.