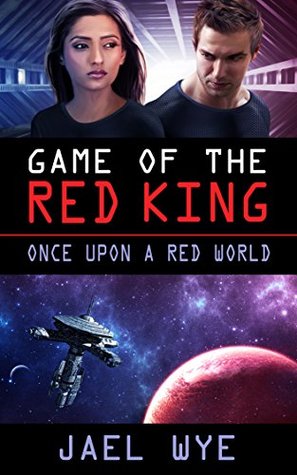 On a ship sailing to undreamed shores...
Martian doctor Sita Chandra left her rich and powerful lover Max Ross years ago to protect their child from his enemies, never thinking she'd see him again. But now she and Max are stuck together on a space ship traveling from Earth back home to Mars, and the passion between them is as hot as ever before--and just as dangerous.
Max has never forgotten Sita, or forgiven her for breaking his heart. Now that the beautiful, infuriating woman is back in his life, he can't lose her and his family again. But the shadows that darkened their past together may yet destroy their future.
When a madman targets Max for a diabolical experiment, threatening the lives of everyone on the ship, It will take all the skill and all the heart Sita and Max possess to survive his deadly game.

Game of the Red King is the short but slightly epic conclusion to the author’s Once Upon a Red World series. The series begins with Ice Red (previously reviewed on SFRQ and also here) and continues with Ladder to the Red Star (reviewed  here).

The setting is a future solar system, where Earth is overburdened and under-funded, and the future of humanity looks like it will happen on the advanced tech Mars colonies. Earth is dying, slowly but probably inevitably, and Mars is in the ascendant.

Earth has exploited all of her resources, where Mars and the asteroids are still untapped. Earth is also extremely polluted and at the bottom of deep gravity well, where Mars scientists have developed gene therapy to keep them from dying of radiation poisoning, and incidentally cure every disease from the common cold to old age.

The colonists may not be immortal, but they can be pretty sure of seeing their second century, and possibly even their third, if they keep up their “Correction” treatments. Correction has the added benefit of functioning as a Fountain of Youth, keeping their appearance in their late 20s to early 30s, no matter how many extra decades they’ve experienced.

Dad is not very good at picking business associates. He’s been much too busy looking for new projects to conquer. His daughters seem to love him anyway.

So it is fitting in Game of the Red King when all of his past mistakes come back to haunt him, possibly to the point of death. It’s about time that he is threatened directly, after all the times his associates have tried using his daughters to reach his heart or his wallet. It’s been a good thing that his daughters have rescued themselves, because Max Ross’ possession of a functioning heart is certainly questionable.

When Devi brings herself to her dad’s attention, he had no idea that she existed. And now that he does know, it’s time for him to settle things with her mother, possibly his first and biggest mistake.

At the time Devi was conceived, Max was too busy courting partners for his proposed space elevator to recognize that Devi’s mother Sita was the best thing that had ever, or possibly would ever, happen to him. And he threw her away on the altar of his ambition. Now he’s angry that she hid his daughter from him for over 30 years, and she’s still angry that he doesn’t see that his own actions precipitated the break.

But even after 30 years, the fire between them is still burning. So is all the anger. And so is Sita’s fear that Max will love her and leave her again, without seeming to even look back.

Instead, the last vestige of one of Max’ ill-considered partnerships rises up from the past to finally put Max in the same life-threatening danger that nearly took both of his daughters. And it’s up to Max to use his genius to find a way back to the life he left behind, and the heart he never recovered.

Escape Rating B: Game of the Red King is very short, about half the length of the two previous books. A lot of the worldbuilding has already been done. However, this means that it is necessary to read the other two books in the series before embarking on Game.

I’ll also say that because it has been a while since I read the first two books, it took some definitely memory searching to figure out how this whole scenario fit together. I enjoyed the first two books when I read them, but they are a bit like cotton candy – they tasted good at the time but the flavor didn’t linger. 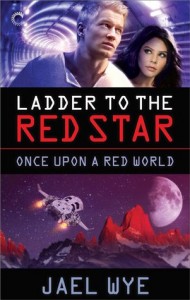 In the first two books, there was definitely a fairy tale theme going on, as the author attempted, with some success, to recast traditional fairy tales into a high-tech Martian setting. This was particularly apparent in Ice Red, but less so in Ladder to the Red Star. I didn’t see that theme in Game of the Red King, but maybe it’s there and I missed it.

I still really like both Bianca and Devi. While Max was a neglectful father, he also didn’t hamper Bianca, and Sita did a good job with Devi. Both young women are intelligent, and are not shy about inserting themselves where needed and making sure shit gets done. If they are fairy tale princesses, they owe way more to Princess Leia than Cinderella.

But the main story in Game of the Red King is Max and Sita. It feels like she did the right thing 30 years ago by leaving Max. He was a selfish and self-centered (also uncommunicative) ass, and he deserved what happened. Of course, his response was to retreat even further into his engineering and let other people (very, very unscrupulous people) handle the business aspects of his very lucrative company.

In every story, Max’s tunnel vision has come back to bite someone. First it was Bianca, and then it was Devi. It feels good that this time the person who gets threatened with death and dismemberment is Max himself, because it really is all his fault.

That he gets himself out with a whole lot of MacGyver and some timely help from Sita made a satisfying solution to his dilemma. Unsatisfyingly, however, is that his problems are caused by a villain who has tipped way too far over into bwahaha evil. And also into sheer nutjob territory.

All in all, though, a fitting conclusion to the series.