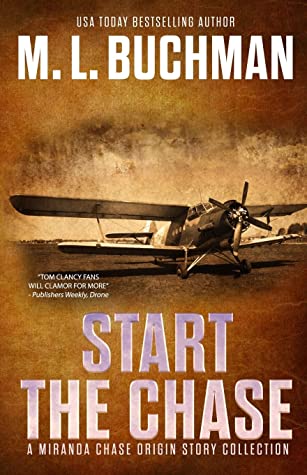 Miranda Chase’s Team—before they were one!
Before they were the hottest, and most at-risk air-crash investigation team for the NTSB and the US military, the six members of Miranda Chase’s team had each started along very unique paths.
Courtesy of backers of The Great Chase tabletop game Kickstarter, their pasts are revealed. Discover why each team member’s future turned out so differently than they planned.
Six exciting stories filled with challenges, disasters, and triumphs. Five stories with fans as guest characters. A fun and wild flight.

I usually have a hard time getting myself stuck into short story or novella collections, but Start the Chase was definitely an exception. Just as Miranda Chase herself is an exception in so many fascinating ways. 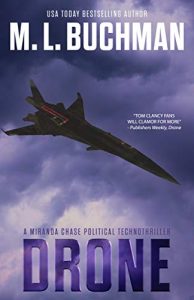 In the middle of a week that has gone completely off the rails, I was looking for something that I could get sucked into instantly that wouldn’t let me go until the end, and the Miranda Chase series has been good for that from the very first book, Drone.

But there haven’t been any new books in the series for a few months, as the author has been busy taking care of all the good business that was generated when he got his rights back to his earliest work. Which I loved from all the way back in The Night is Mine, lo those many years ago at the beginning of Reading Reality. So if you love military romance, now is a great time to start or restart his Night Stalkers series and all the deliciously good books that followed.

I needed to get lost in a book and a world that I was already familiar with, and I wanted to read Start the Chase before Lightning struck, so here we are.

The stories in Start the Chase are all origin stories. Which makes this a great place to start the series if you aren’t already part of the action.

What makes the stories special is that they show us the characters we have come to know and love at pivot points in their lives. Specifically the pivot that changed their courses into the one that eventually intersected with Miranda Chase and the rest of her team. To kick things off there’s the pivotal moment when Miranda investigated her very first plane crash on her very own.

She had to do the investigation on her own, because the crash she was investigating was also her own. On her way to her first class at the NTSB her private plane crashed in the desolate forest between Washington State and Idaho. Miranda was the pilot and the only person aboard. Her meticulous investigation of a crash that she honestly didn’t expect to be rescued from kept her sane until her rescuers surprised her and themselves by finding her alive. She learned a valuable lesson in this story, and we learned a lot about her. Not that a lot of her past hasn’t come up over the course of the series, but this particular bit of detail was something special.

For each member of the team, the story in Start the Chase is just as pivotal as Miranda’s High Passage, Holly Harper’s story, Holly Games a New Path, begins during one of Holly’s darkest moments. She has just left the Australian Special Forces after the loss of her entire team. A new friend drags her to, of all places, a gaming convention, where Holly, costumed as Captain Marvel, discovers that she still has friends both in and out of the service, and that there’s a surprising, but surprisingly interesting opportunity for her if she is willing to seize the day.

Mike’s Last Big Con is the story that comes the closest to the opening of the Miranda Chase series, as we see the secretive Mike in his last undercover job for the FBI as it all goes completely pear-shaped. Working with Miranda is going to require that the long-time conman live on the straight and narrow – a place with which he is not even remotely familiar.

All six of the stories provide insights into characters we think we know. There have been hints before, but this collection fleshes out the details of how they ended up on the path that leads to the team. For fans of the series, it gives us an up close and personal look at people we thought we knew. For those coming in, it’s a great way of seeing who they were as individuals before they jostled their way into becoming part of such a marvelous whole.

Escape Rating A: I loved this collection. I got sucked in right away and didn’t get shaken out until the end – wishing there were more. Or wishing that Lightning was here now and not next month. I’ve missed Miranda and the gang and it was fantastic to spend time with them again.

Because this collection was produced as part of a Kickstarter campaign for The Great Chase Tabletop Game that Miranda and her team play during the later books in the series, there’s an additional fascinating piece to this collection of great stories.

One of the backer levels for the Kickstarter was the opportunity for five people to get themselves written into the individual stories as secondary characters. (This is called Tuckerization after the SF author Wilson “Bob” Tucker. I only mention this because once upon a time, when I went to a LOT of SF cons, I knew Tucker a bit. I digress.) 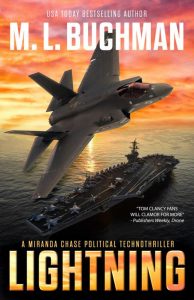 In Miranda’s story she’s alone, that’s a huge part of the point of the story after all. But in all of the other stories the secondary character who helps push or guide Miranda’s future team member into the path that leads them there is one of these backers. All of the stories include more than a bit of real detail about those backers, along with a way for readers to support the charities of their choice. So there’s a prompt to do a bit of good in the world – which seems to need it now more than ever – along with a terrific story.