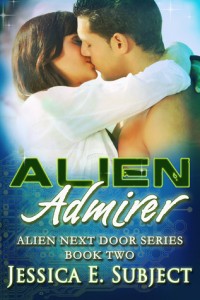 He fills her with forbidden longing…

Widowed for over a year, Sera longs for the company of her younger, sexier neighbor, the one man she can never have—unless she plans to rob the cradle. It’s too dangerous…

She’s the only one for him…

Adam never wanted to settle down…until Sera. But even when her children give him the green light, he must prove age is an alien concept…

Will Sera give him a chance, or will Adam be left in the cold, never more than her alien admirer?

Alien Admirer takes a light touch with the science fiction aspects of this science fiction romance, but the author shows a deft hand with the down-to-earth problems involved in a widow with young children not just thinking about dating, but falling in love with the younger man next door.

The story is sweet, sexy and realistic about how it handles the issues of a woman who more than young enough to move on with her life after the death of her husband more than a year previously, but who has kids that she has to put first in everything she does.

And her best buddy is her next-door-neighbor, a man eight years her junior that her kids absolutely adore and who not only takes great care of them, but clearly loves them for themselves.

The only problem is that Adam is still living over his parents’ garage; and until recently, he hasn’t exactly acted like he was looking to settle down. So it’s not at all surprising that Sera is skeptical about what seems like Adam’s sudden interest in settling down with her.

What she doesn’t know is that Adam isn’t strictly human. And that now that he knows that Sera is his mate, she really is the only woman for him. For the rest of his life. Whether she accepts him or not. 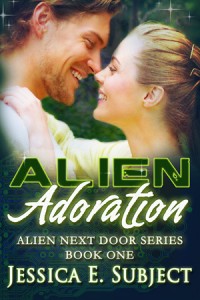 Escape Rating B+: I enjoyed this story a lot. Enough that I went to Amazon and bought the first book in the series, Alien Adoration, because I want to read Adam’s parents’ story.

One of the tropes that seems to be difficult to get right is the older woman/younger man romance. There are issues that have to be dealt with, but too often the problems are glossed over or the concept is played for laughs. In this case, the author treated Sera’s concerns about the age difference seriously, and made sure that they were addressed rather than dismissed.

The children were not just plot devices either, they were real people, surprisingly so for a very short novella. And it was cute that they helped Adam arrange things for the lovely happily ever after.

If you like your science fiction romance light on the SF and emphasis on the R, get your own (copy of) Alien Admirer.

Night after night, Rachel fantasizes about her sexy, playboy neighbor. But in her small town, no one changes, least of all the bad boy next door. But when Luke rescues her not once but twice from disastrous dates, she dares to believe her knight in black leather armor may be the right man for her after all.

Until she learns the truth…

Life on Earth has never been easy for Luke. Stranded as a little boy, he struggled to craft an existence for himself, but he never forgot the first human he met–and he never stopped wanting to see her again. Returning to Hanton, Luke longs for Rachel. Yet, nothing goes as he plans, and Rachel barely notices him. Convincing her he isn’t like all the jerks she’s dated means telling her the truth, but can she handle it?

Can she overcome her fears, or will she deny her alien adoration and leave him stranded once more?

Which means, unfortunately, that I didn’t adore Alien Adoration as much as I admired Alien Admirer. This first book in the series was definitely cute and sweet, but didn’t seem quite as polished as the second book.

(And I’m aware that someone should take my punning license away, but the temptation was irresistible.)

As with Alien Admirer, in Alien Adoration we have our alien hero and our “original recipe human” heroine.

But while in book 2, the heroine’s story had the most depth, in book one we have Luke, an alien from outer space who played with one too many buttons on the control panel of his parents’ spaceship as it passed by Earth.

Luke stranded himself here as a boy, seeming to be about eight years old. He appeared in the middle of the night in an unprepossessing small town, and is observed by a little girl staring out the window. She lets herself out of the house, and meets her first, and last, alien. She never forgets the night, but can’t remember his name.

Rachel grows up, and sometimes wonders if that night was a dream. She dreams it over and over as the years go by.

She still lives in the same small town, a place that seems to be the divorce capitol of the universe. Or at least Earth. Marriages don’t last (her parents’ marriage certainly didn’t) and relationships have an incredibly short shelf life.

Especially the “relationships” that the hottie next door seems to have. Gorgeous women come home with him in the early evening, and leave screaming in the middle of the night.

It’s too bad for Rachel that she can’t help thinking about her neighbor, and that there don’t seem to be any decent men in town. The local church ladies feel so sorry for her, they fix her up with one “nephew” or “cousin” after another. Too bad they all turn out to be scumbags.

She has no clue that the hot neighbor with the revolving front door is the grown-up version of the little alien boy. Or that he’s come to her small town to find her.

Escape Rating B-: There’s a sweetness to the romance between Luke and Rachel that lets the reader overlook some of the fluffy shortcuts in the storytelling while reading, but this one just isn’t quite up to Alien Admirer.

We never do know what makes Rachel’s small town of Hanton such a rotten place for people to build lasting relationships. It doesn’t just seem to be Rachel’s perception, the place really is that bad. But why? Is it something in the water? Is everyone in a high-risk profession? Alien influence?

Luke comes to Hanton with the express purpose of finding Rachel. If she’s the woman he wants so badly, why is the skank parade passing through his front door? Especially with her right next door and having a ringside seat for the show? Some part of this combination didn’t work for me.

Particularly when added with Rachel’s own unfortunate dating history. She has kissed more than a few of the town frogs. A lot of the guys in Hanton are real jerks. When they confirm they’re jerks, Rachel dumps them. But Luke’s behavior looks awfully jerk-like, and rightfully makes her wary.

Although I do wonder if the so-called “church ladies” don’t have something to do with the high divorce rate. They seem to have a corner on the destructively evil gossip market. Maybe they’re witches?