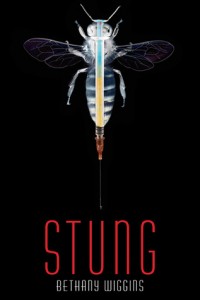 Fiona doesn’t remember going to sleep. But when she opens her eyes, she discovers her entire world has been altered–her house is abandoned and broken, and the entire neighborhood is barren and dead. Even stranger is the tattoo on her right wrist–a black oval with five marks on either side–that she doesn’t remember getting but somehow knows she must cover at any cost. And she’s right. When the honeybee population collapsed, a worldwide pandemic occurred and the government tried to bio-engineer a cure. Only the solution was deadlier than the original problem–the vaccination turned people into ferocious, deadly beasts who were branded as a warning to un-vaccinated survivors. Key people needed to rebuild society are protected from disease and beasts inside a fortress-like wall. But Fiona has awakened branded, alone-and on the wrong side of the wall…

Fiona Tarsis goes to sleep in a world much like our own, just with fewer bees.  When she wakes up, she’s immediately faced with what that world has turned into, and she is taken on a wild ride.

The decline in bee populations is a real problem; losing major pollinator species means fewer plants and crops, which in turn could have a significant ripple effect on human society.  In Stung, however, attempts to solve that problem have backfired spectacularly: people who received a bee-flu vaccination turned into the equivalent of werewolves–with no way to return to normal.  (How does one get from bees disappearing to bee flu?  Let’s just say that it’s not a good idea to short-circuit the scientific peer review process.  It’s also not a good idea to keep digging, once you’ve found yourself in a hole.)

Fiona wakes up knowing only that she must hide her tattoo and that she’s still thirteen.  The latter “fact” is quickly proven false–four years have passed since the culmination of the disaster–and she must survive long enough to figure out what’s going on.  Fortunately, she soon runs into a young militiaman named Bowen, and with his help starts to learn more about herself and her world.

Escape Rating B-:  At the exhibits hall of any American Library Association conference, advance reading copies are generally easy to pick up.  In this case, it was particularly easy: the ARC was literally thrust upon me.

It’s easy to see why the the publicist in the booth was collaring passers-by.  Stung is a fast-paced, engaging read.  The author does a good job dropping Fiona and the reader into an uncertain situation and providing enough information to keep the pages turning while not giving the game away too soon.  In fact, Wiggins has written one of the better amnesiac openings I’ve read in some time.

Fiona is a sympathetic viewpoint character.  Although her upbringing was middle-class and sheltered, she’s not completely helpless in the rough circumstances that face her.  She can shoot quite well (a legacy from her father’s training), she’s smart, and she eventually finds out that the vaccination has given her some advantages in tight spots.

In Bowen she finds a connection to the pre-apocalyptic world and a source of romantic tension.  As it turns out, if you go to sleep at 13 and wake up at 17… you don’t still don’t get to skip puberty.

Unfortunately, for all her general competence, Fiona still needs rescuing at the end.  While Fiona herself is not unhappy with how things turn out–and Bowen serves nicely as a rescuing knight–I finished the book wishing that Fiona had had a little more control by the end.  Also, the main villain had a little too much cardboard in his makeup for my test.

The last page of the book leaves the door open to a sequel; if one is written, I hope that Fiona avoids the trap of becoming little more than a symbol of better days to come.  That said, I do hope that Wiggins continues the tale.