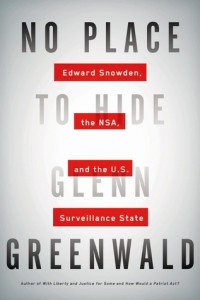 In May 2013, Glenn Greenwald set out for Hong Kong to meet an anonymous source who claimed to have astonishing evidence of pervasive government spying and insisted on communicating only through heavily encrypted channels. That source turned out to be the 29-year-old NSA contractor Edward Snowden, and his revelations about the agency’s widespread, systemic overreach proved to be some of the most explosive and consequential news in recent history, triggering a fierce debate over national security and information privacy. As the arguments rage on and the government considers various proposals for reform, it is clear that we have yet to see the full impact of Snowden’s disclosures.

Now for the first time, Greenwald fits all the pieces together, recounting his high-intensity ten-day trip to Hong Kong, examining the broader implications of the surveillance detailed in his reporting for The Guardian, and revealing fresh information on the NSA’s unprecedented abuse of power with never-before-seen documents entrusted to him by Snowden himself.

Going beyond NSA specifics, Greenwald also takes on the establishment media, excoriating their habitual avoidance of adversarial reporting on the government and their failure to serve the interests of the people. Finally, he asks what it means both for individuals and for a nation’s political health when a government pries so invasively into the private lives of its citizens—and considers what safeguards and forms of oversight are necessary to protect democracy in the digital age. Coming at a landmark moment in American history, No Place to Hide is a fearless, incisive, and essential contribution to our understanding of the U.S. surveillance state.

I chose this book for 9/11, not because it’s a story about the terrorist act, but because I see a clear bright line that can be traced from that day to the fear-mongering that birthed the Patriot Act and all of its restrictions on civil liberties to the security state that Edward Snowden (and Glenn Greenwald) defined in Snowden’s release of the NSA documents.

I keep thinking of the Ben Franklin quotation; “Those who would give up essential Liberty, to purchase a little temporary Safety, deserve neither Liberty nor Safety.” Because that is exactly what has happened.

The reduction in civil liberties, and the rise in the government’s ability to track every single thing we say and do and write in any online context, including supposedly private emails, chat and telephone calls, does not seem to make us any safer.

But it does make it much easier for anyone, including the government, to exploit our every action to keep us from even thinking about the power that holds them in place.

Everyone has something to hide. Not just supposedly “bad people” but everyone. We hide things all the time. What we really think of our bosses and co-workers. Information about our health. Whether we are happy or unhappy. Whether we brushed our teeth and whether we lied about it to our parents when we were children.

Think about all the things you do in a day. Would you want to have to explain it all? One of the points of No Place to Hide is not that the government will necessarily do that to every person, but that the fact that they can has a chilling effect.

Compare it to the effect of management attending a union meeting to get the idea of that chilling effect. Or the effect of your parents (or your children) watching you having sex with your spouse.

The book is about courage. It’s about one person, or a very few people, having the conviction to try to change the world. Or at least to make sure that people have information and talk about the changes that have already occurred.

The title “No Place to Hide” is a message for us. The price of being connected in our society is to give up various bits of privacy to every company we do business with over the Internet. But do we expect to give it all? And should the government be able to take it all?

The revelations that Edward Snowden released in the NSA papers reads as mundane when you look at the actual memos. With all of the included and obfuscating jargon, they read like any set of internal corporate memos. It’s the meaning of them that chills. That gathering more and more data more and more secretly is a game to the government that they are determined to win at all costs.

In addition to the analysis of the documents themselves, the book also tells the story of the creation and release of the articles that contained the documents, which reads like a spy thriller but is even more chilling for being true.

The recitation of the way that the media has handled the story and the cosy relationship between the media and the government, recalls another famous quotation; “Power tends to corrupt and absolute power corrupts absolutely.”

Reality Rating A-: Two of the three parts of this book are a compelling read: the story of Snowden reaching out to Greenwald to arrange for the release of the documents and the story of the way that the media and the government handled the story after it broke reads like a spy thriller, except that it is a true story.  The description of the media  and governmental backlash, including the threats to the journalists’ safety and freedom makes the reader think about the way that news and opinions are represented. His essay directly discussing the relationship between corporate media and the government should frighten anyone, because anyone can be demonized in an instant. (Think of the coverage of the Occupy movement as a very recent and chilling example) The way that Greenwald demolishes the argument that “only bad people get targeted” should be read by every thinking adult.

We can all be defined as “bad people” by someone who sees simply talking about changing the order of things as a sign of instability or resistance. And if you don’t believe this, think of any employment situation and the cost of telling truth to power if that truth is negative.

While the NSA’s internal agency correspondence are not scintillating in and of themselves, the sheer level of intrusiveness into online life around the world will make you shiver, especially when it is followed by the analysis that confirms what many of us have suspected while taking off our shoes at the airport; all this data collection isn’t making us more safe. But it has the potential of making us less free.

As a professional librarian, I am a member of a profession that takes the individual’s right to read what they want without interference or oversight as a central tenet of the profession, and of a citizen’s right to privacy. The freedom of the press loses its meaning without the accompaniment of the right to read what that press has published. Librarians have been watching the expansion of the Patriot Act, including the provisions that gag any person or institution served with a warrant resulting from the powers in that act, with grave concern.

This story, and the way that both the whistleblower and the journalists have been treated as a result of breaking this story, should concern us all.