The Mongoliad, of which Book One has just been published, is any number of things. It’s the first book in something its seven creators call The Foreworld Saga–more on that later. It’s also a cooperative effort with seven, count them, seven authors–but it isn’t a collection of short stories. It’s a novel, at least as published.

It started out as an experiment. A serial novel, published online at mongoliad.com, then the result edited down and published as a novel.

About that serial story, and the origins of the novel, and the effect it has on the book that I read. In other words, why did I go hunting for the website?

The Mongoliad, Book One, felt like it dropped me into the middle of the story. Or two stories.

The book takes place in 1241. In history, that was when Ögedei Khan, son of the famous Genghis Khan, controlled most of Asia, and had stretched his vast empire into Eastern Europe.

Not part of history was the “Circus of Swords” that draws the great Western champions to Legnica in Western Poland. There was a battle there during the Mongol invasion of Europe. But not a tournament. 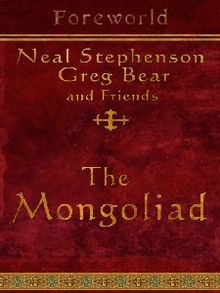 The authors of The Mongoliad invented the tournament as part of their alternate history, The Foreworld Saga. They wanted to create a story-vehicle for fighters of as many different schools of Western Martial Arts as possible to get a chance to use those arts. (This idea isn’t new, Tolkien initially wrote the Lord of the Rings because he invented Elvish first and wanted to create a world where it was spoken)

So, we have the “Circus of Swords”. We have a group of champion fighters. What’s the story? The tournament is not the story.

One part of the story turns out to be leaving the tournament on a quest to assassinate the Great Khan and save Western Europe from invasion.

The second part of the story takes place at the Great Khan (Ögedei’s) court. One of Ogedei’s brothers sends a young warrior, Gansukh, to court to try to convince the Khan not to drink quite so much. (According to Wikipedia, Ögedei Khan did actually drink prodigiously)

Gansukh is assigned a tutor to learn to navigate the dangerous ways of the court, because he is more used to killing his enemies with his sword than being flayed with sharp tongues. And in order to have any influence with the Khan, he will need to find a way to get close to the Khan without murdering his favorites.

So there are two stories, the Western champions working their way towards the Mongol capitol, Karakorum, in order to assassinate the Khan, and Gansukh, trying to find a way to save the Khan from his own alcoholism, and the resultant loss of respect. Also, Gansukh has to keep himself alive among the snakes at court.

These two stories are going to intersect, but not until at least Book Two!

Escape Rating C: It took half the book for the story to truly capture my interest. And half this book is 200 pages. If I hadn’t been assigned this for a magazine review, I might not have finished.

Gansukh’s story is the more coherent. His is a distinctive personality, and his point of view is easy to follow. Also, the “fish out of water” position he finds himself in is one that is easy to sympathize with. He wants to be back on the steppes, and the reader understands completely!

The Western champions are much harder to distinguish. There are too many, and they don’t talk a lot. A lot of men who are primarily interested in fighting don’t discuss their feelings or motivations a whole lot, which makes it hard to empathize. Everyone is mysterious. The point of view character is Cnán, a girl from a group known as the Binders — whose origins and motivations the reader also doesn’t know.

And is this alternate history, fantasy, or something else? The information at mongoliad.com leads one to the conclusion that it is sort of alternate history, but not yet. A cliffhanger ending is one thing, but this much outright obscurity does not inspire me to continue. 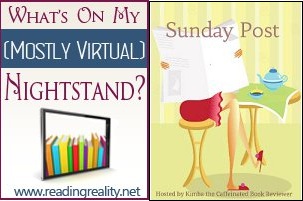 As I looked for a replacement Mailbox meme, I looked long and hard at The Sunday Post. Why? Because I do a Sunday post, it’s this one, my mostly virtual nightstand.

Kimba the Caffeinated Book Lover (and I love that name, BTW) created her meme in part to fill the gap. But The Sunday Post is also intended as a

“chance to share News. A post to recap the past week, showcase books and things we have received and share news about what is coming up for the week on our blog.”

To make a long story short, I’m going to link Virtual Nightstand to The Sunday Post. Anyone who comes here from that link might wonder why they got here. Or hopefully they’ll just jump down to the cover pictures.

What’s up this week?

Monday is Ebook Review Central, of course! This week is Leap Week, so I’ll be covering two new publishers, Red Sage Publishing and Curiosity Quills. They are permanent additions to ERC. For this first round, you’ll see a round up that takes them back to the beginning of ERC and catches them up to everyone else, so September 2011 through March 2012, if they have titles back that far.

Tuesday, May 8, I’m hosting an interview with Lisa Kessler, author of Night Walker, as part of a Bewitching Book Tour to celebrate the re-release of Night Walker in paperback! I’ll also have a review of Night Walker and an entry for several tour-wide giveaways.

Thursday, May 10 Reading Reality will be the host for a guest blog from Kay Dee Royal, promoting her book Staring into the Eyes of Chance. This is also part of a virtual book tour from Bewitching Book Tours. And I will also be posting a review of this shapeshifter/paranormal romance, the first book in Ms. Royal’s new Lycan International Investigation Agency Series.

On my nightstand, there are books I’m reading to prepare for next week. I always look a week ahead so I don’t get too surprised. Also, next week I’ll be traveling again, which does throw things off a bit!

There are only four, so maybe I’ll have a chance to catch up with myself. Probably not. But a girl can dream next to her nightstand, can’t she?

I asked for A Patch of Darkness by Yolanda Sfetsos from Samhain because it sounded like an interesting urban fantasy/paranormal romance. And because some of Ms. Sfetsos’ previous work has been well-reviewed. And because it’s book 1 in a series, so I don’t have to jump into the middle, or read a long backstory. All good things. I’ve averted my eyes from some early reviews.

Railsea by China Miéville is a book that I selected from NetGalley because my husband likes China Miéville’s work. And Galen is supposed to provide a guest review for this one for me.

On May 17 Reading Reality will be hosting a Virtual Book Tour of Bad Girl Lessons by Seraphina Donovan for Book and Trailer Showcase. So, I need to read and review the book before the tour.  This book just sounded like yummy fun. Good girl seeks bad boy to teach her how to have a good time after she gets dumped at the altar. Sex, love and romance ensue.

I have to remind myself that I also have a print ARC of The Mongoliad Book One by Greg and Erik Bear and a host of others on my nightstand. It’s not only a relatively big monster (450 pages), but I owe my editor at Library Journal a review on May 21. This one is sort of looming out there. Like an attacking horde.

So, are there any books on your nightstand that you’re looking forward to? How’s your Sunday treating you? And what do you have planned for your week?