Robin Goodfellow Blackthorn is the youngest of the Blackthorn Brothers. Having been blessed, or cursed with this Shakespearean name by his actress mother, he is, of course, generally called ‘Puck’. As one of the Blackthorn bastards, he has felt compelled to live up to the ‘Trickster’ aspects of his Puckish nickname, but in A Midsummer Night’s Sin, the second Blackthorn Brothers book by Kasey Michaels, both the dark and light sides of Puck’s nature are required in order to bring this complex but ultimately rewarding historical romance to its delightful final curtain.

Puck has returned to England in order to find out what his middle brother Jack, not so fondly known as Black Jack, is up to. In the first book in the series, The Taming of the Rake (see review), oldest brother Beau got married, and it was revealed that second son Jack, instead of being quite as black as his nickname would suggest, is actually some kind of secret operative for the government. Puck wants to learn what Jack is up to, and possibly get Jack to mend fences with their father.

Mostly, Puck just wants in on whatever adventure Jack is having.

Regina Hackett thought that she and her cousin Miranda were headed to a ball, properly escorted by Miranda’s mother. But Miranda re-arranged all the plans so that the young ladies were instead off for a masked ball at the considerably less reputable, actually quite scandalous, Lady Fortescue’s.

Puck is attending the masquerade in his pursuit of an entree into the lower echelons of the ton, and in his pursuit of his brother’s confederates. But he is captivated by the sight of Regina Hackett, and, believing her one of the ladies hired for the evening’s entertainment, entices her into the garden for a kiss. Regina takes advantage of the anonymity of her mask to experience the beginnings of a flirtation, but when Puck details all of the naughty things he wants to do with her, in French, and starts acting on that list, her shaky innocent withdrawal finally convinces him that she is not what he assumed her to be.

But her cousin Miranda, petite and blonde, has been kidnapped from the masked ball. And when Regina searches desperately for her, she runs headlong into Puck. He is the only possible source of help, and he did act almost honorably, at least once convinced of her innocence. Puck and his coachman determine that Miranda was taken against her will; she did not leave for an assignation. Then Regina and Puck fabricate a story that will cover up the girls’ departure from their original schedule.

Puck’s and Regina’s association should have ended there. Miranda’s father should have called out the Bow Street Runners, and a search for the missing girl should have begun immediately. But the situation is much more complicated than it appears.

Miranda is not the first petite blonde young woman to be kidnapped in London. She is one of more than two dozen such women.  Many have been prostitutes, but some are from extremely well-connected families. Jack and his confederates are on the case on behalf of the government. This isn’t just a matter of kidnapping, “white slavery” is suspected, but no one has been able to determine who the ringleaders are.

But now that her cousin has been kidnapped, Regina feels compelled to help Puck find the culprits, even if her father turns out to be one of them.

But why should Regina even suspect her father? At first, Reginald Hackett seems like just another tyrannical father, a stock character in any romance, if a bit more menacing than most. So what if his father effectively “bought” Regina’s mother, and her title, as a way of bringing his merchant family up in the world? He’s not the first to do so. But Lady Letitia Hackett lives in abject terror of her husband, and so does the rest of his household.

When he demands that the Bow Street Runners he finances go to Gretna Green in search of Miranda, even though Reginald admits that he knows she did not elope, he raises suspicions in many minds.

Soon, Regina and her mother are hiding out from her father in a variety of Puck’s households in London, while Puck, Regina and Jack’s men search for the missing women. But if her father does turn out to be the kidnapper, can Regina possibly have a future when he is caught, even with one of the infamous Blackthorn bastards?

Escape Rating A: This should have been a light, frothy romance, and it wasn’t. But it was all the better for it. Regina is a woman who finds amazing depths of courage, in order to keep hunting for her cousin. Puck reminds me of the Scarlet Pimpernel. He looks and acts like a complete lightweight, up until the point where he totally isn’t.

The “white slavery” plot is one that was a staple of penny-dreadfuls, and it was used here to great effect. It made for an appropriately dark and dastardly villain and gave this story a breakneck pace as the search for Miranda and the other girls ran towards its deadline.

I can’t wait for Jack’s book! Much Ado About Rogues should be out in March 2012. Not soon enough. Not at all! 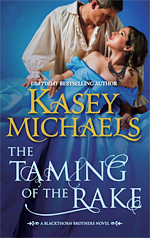 The Taming of the Rake, by Kasey Michaels, is the first book in her new trilogy about the Blackthorn brothers.

The most important thing to remember about the Blackthorn brothers is that they are bastards. That’s not a value judgment, it’s a statement of fact. Their parents were not married, at least not to each other. Their father, the Marquis of Blackthorn, loved their mother, but married their aunt to protect her from being sent “away” because she was a bit, well, simple. Not to mention slightly fey. And their mother wanted to be an actress, not exactly a respectable pursuit for a Marchioness. So everyone came out ahead. Except for the Blackthorn boys. All three of them.

Beau, legally named but never called Oliver, is the oldest. And he is forcibly reminded of his bastardy by Thomas Mills-Beckman when Beau makes a quite respectable offer of marriage for Thomas’ sister Madelyn. Thomas has the servants horsewhip him for his effrontery, witnessed by the entire household, including Madelyn’s much younger sister Chelsea.

This is not the story of Beau’s and Madelyn’s thwarted love. Madelyn is not worth two minutes of Beau’s time. Beau takes his whipping like a man, picks up the shreds of his dignity and joins the Army. This is, after all a Regency, or close to it. Beau makes a name for himself at Waterloo. By the time he returns, Madelyn’s little sister has grown up.

The story is Beau’s and Chelsea’s story. Chelsea needs to escape from her brother Thomas’ desire to reform both himself and her by giving her in marriage to a scheming, fraudulent reverend with a perpetually wet mouth and wandering hands who only wants Chelsea for her access to her brother’s money. She throws herself on Beau’s probably non-existent mercy because she is sure he is the one man who will jump at the chance on using her to get revenge on her brother. And she is right. But instead of revenge, what Beau and Chelsea get is each other.

Escape Rating A: How Beau and Chelsea discover that what they really want is a future together is the heart of the story. These are two intelligent characters who find out that they have much more in common than a simple desire for revenge. On their way to Gretna Green for a hasty elopement, chased every step of the way, they still manage to have fun. And so does the reader.

This is just the first story. Beau has two brothers, each of whom should get his own book. I’m looking forward to them. The second brother Jack, seems to spy for the government at least some of the time, and he’s very secretive about it.  The youngest brother, Puck, wastes time as a “fribble”, in his own words. I also want to see if I’ve guessed right. I think their parents may really be married after all, but if it’s true, that will be part of the big finale at the very, very end. We’ll see.