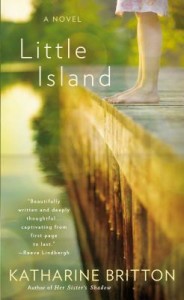 Grace
Flowers
By the water
Have fun!

These are Joy’s grandmother’s last words—left behind on a note. A note that Joy’s mother, Grace, has interpreted as instructions for her memorial service. And so, the far-flung clan will gather at their inn on Little Island, Maine, to honor her.

Joy can’t help dreading the weekend. Twenty years ago, a tragedy nearly destroyed the family—and still defines them. Joy, Grace, her father Gar, and twins Roger and Tamar all have their parts to play. And now Joy, facing an empty nest and a nebulous future, feels more vulnerable than ever to the dangerous currents running through her family.

But this time, Joy will discover that there is more than pain and heartbreak that binds them together, when a few simple words lift the fog and reveal what truly matters…

Little Island is a story about the corrosiveness of family secrets and the lies that people tell themselves (and each other) in order to hide their truth from the world, or from themselves.

The Little family seems like a happy family, at least on the surface. Grace and Gar have a solid marriage and a good life running a B&B on Little Island in Maine. Both their daughters are married, and have kids of their own. The younger daughter, Tamar, is a successful lawyer. But son Roger has always been the scapegrace of the family. He drinks too much, he does prescription drugs, and 20 years ago he killed a girl while drunk driving.

So maybe not quite an ideal family, but not too bad. They’ve all moved past Roger’s accident; he did his time long ago.

All is not as it seems. Their older daughter, Joy, has just sent her son off to college and can’t see a future for herself or her marriage without her son as the glue. Tamar’s marriage is falling apart, because she’s been too busy working (and micro-judging everyone in her path) to maintain a bond with her husband or have much knowledge of her twin daughters. Gar is starting to forget things. And Grace’s mother just died, and in the wake of that event, her long-lost aunts got in touch with her. Grace didn’t even know her mother had sisters. Or a family.

And Roger is continuing to slide slowly downward, a little bit at a time.

But as the story unfolds, the perspective switches from Joy and Grace in the present to Joy and Tamar 20 years ago, the time of Roger’s terrible accident. As the past unravels, the family discovers that a lot more died on that awful night than one young woman. And the present holds more joy and hope than anyone first thought.

Salmon-picnicking bears are a great way to liven up a memorial service.

Escape Rating B: OK, that last sentence in the review was kind of a spoiler–but you have to read the book to get the joke. And it’s worth it.

Little Island is a story about family dynamics, particularly about the way that one single event, one secret, can echo down through the years and fracture the foundation. It’s not that they are all unhappy, in the sense of the quote about happy and unhappy families, it’s that they are all lost.

The relationship that is the most damaged, and gets the most attention in the story, is the relationship among the siblings, Joy, Roger and Tamar. Roger and Tamar are twins, and shared everything together, until they suddenly didn’t. But neither of them could quite move on from that one secret, and they were so dependent on each other that they couldn’t break away, either.

Joy, the older sister, was always left out of the twins tight little twosome. And Tamar was frequently cruel about making sure that she stayed out.

So it’s Joy’s perspective that we follow most in the story, because she’s always been an observer. She’s even on the outside of her own life, because she’s so conditioned to waiting in the wings.

The story starts out slowly, but picks up speed as more of the past is revealed, and we can see how that past continues to impact the present. There is also a thread about the impact of stories, particular the stories that families tell about themselves and each other, and the way that the expectations those narratives create continue to ripple throughout our lives.

Katharine is giving away a paperback copy of Little Island to one lucky U.S. winner.