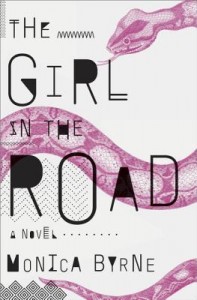 In a world where global power has shifted east and revolution is brewing, two women embark on vastly different journeys—each harrowing and urgent and wholly unexpected.

When Meena finds snakebites on her chest, her worst fears are realized: someone is after her and she must flee India. As she plots her exit, she learns of The Trail, an energy-harvesting bridge spanning the Arabian Sea that has become a refuge for itinerant vagabonds and loners on the run. This is her salvation. Slipping out in the cover of night, with a knapsack full of supplies including a pozit GPS system, a scroll reader, and a sealable waterproof pod, she sets off for Ethiopia, the place of her birth.

Meanwhile, Mariama, a young girl in Africa, is forced to flee her home. She joins up with a caravan of misfits heading across the Sahara. She is taken in by Yemaya, a beautiful and enigmatic woman who becomes her protector and confidante. They are trying to reach Addis Abba, Ethiopia, a metropolis swirling with radical politics and rich culture. But Mariama will find a city far different than she ever expected—romantic, turbulent, and dangerous.

As one heads east and the other west, Meena and Mariama’s fates are linked in ways that are mysterious and shocking to the core.

This relatively near-future piece of literary fiction was recommended to me because I generally like SF. After having finished, I’ll say that the near-future post-global warming setting does not an SF novel make–at least in this case. What the changes in climate have done to alter living patterns in Asia and Africa is futuristic, but I think this story could have found other ways to present the journeying aspects of the story that didn’t require climate change.

It felt like the SF elements were a bit of a gimmick.

What we have is a tale of two journeys; Meena travels from Mumbai to Djibouti, and Mariama travels west-ish across Africa to Ethiopia. Even though the two women’s journeys are a few decades apart, it’s seems clear that they are going to meet in the end. Actually also in the middle, but we don’t know that until the end.

As we learn from their alternating first-person perspectives, both women are fleeing something. And the event that they are fleeing is so terrible that they each obscure the triggering event in myth and metaphor.

Mariama has an excuse for not being able to deal with what she saw. As her story begins she’s only 8 or so years old. Running away from witnessing her mother’s rape and not being able to admit to herself what exactly she’s running from is a kind of mental self-defense.

Meena won’t let herself remember what happened to her because she committed a crime that she can’t bear to face. But she is an adult when it happens.

Meena doesn’t just retreat mentally, she takes herself on a physical journey of nearly mythic proportions. She walks from Mumbai to Djibouti on a construct called “The Trail”, a series of blocks resting on the ocean and harvesting energy from wave-power. There are no mapped communities on the Trail, it is illegal to walk on it. Meena thinks that she has undertaken the 6,000 kilometer journey to reach Ethiopia and find the woman who killed her parents.

Mariama is just fleeing the scene of her mother’s rape, and running from the otherwise certainty that she will be enslaved exactly like her mother was, and eventually suffer the same fate. Mariama runs to save herself, and she mostly succeeds.

Until the future catches up with her, and with Meena, in a way that rewrites both of their journeys.

Escape Rating C-: Because the ending is intended to be shocking, the history and background of the main characters is fairly obscured. Also, they are each narrating their own stories, and they are both extremely unreliable narrators; Mariama because of her youth and inexperience, Meena because of her incredible self-deception.

And Meena spends a chunk of her walk along The Trail pretty much out of her head. The reader is never quite sure whether the story she tells is actual experience, metaphor or the ravings of a madwoman.

The Trail itself, and the changes in world climates that make it possible, sound really cool. I would love to have seen more about the way that the world has come to be. The coping and lack of coping, and downright crazy that have manifested in the world’s people would make an interesting story.

The Girl in the Road just wanders around the edges of possibilities, but doesn’t ever get there.