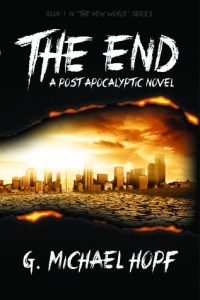 For Gordon Van Zandt life once was one of duty and loyalty to his country, so when 9/11 happened he dropped out of college and joined the Marine Corps. This youthful idealism vanished one fateful day in a war torn city in Iraq. Ten years later, he is still struggling with the ghosts of his past but must now face a new reality thrust on him and his family. North America, Europe and the Far East have all suffered a devastating Super-EMP attack that has caused catastrophic damage to the power grids and all electrical devices. With nothing working from cars to phones and with the total collapse of the economic infrastructure, Gordon must fight for the limited and fast dwindling resources. He knows survival requires action and cooperation with his neighbors; but as daily life continues to break down so does all sense of civility within his community. With each passing day Gordon makes choices that would seem extreme in today’s world but necessary in this new world.

I have a ton of mixed feelings about The End. I couldn’t put it down. The story is absorbing. However, there were a lot of points, especially at the beginning, where I wanted to shake the author and scream “SHOW don’t TELL”, loud and often.

There is a lot of infodumping about the characters and their points of view. Lots of exposition and not much action or dialog.

Then “the end of the world as we know it” finally happens, and the story starts to take off. Although there is action in other places, the main story is one ex-Marine who figures out right away that an Electro-Magnetic Pulse weapon (EMP) has wiped out the infrastructure of the entire U.S. So the story is the breakdown of society, seen in the microcosm of one gated community in San Diego. There are side-plots focusing on the government’s collapse and the fragmentation of the military.

But the focus is on how Gordon Van Zandt and his family are affected.

Gordon is a survivor; and he has determined that his family will survive, his wife and two kids. (We know his daughter survives because the entire story is told by her as flashback)

It’s not just that Gordon is a polarizing figure, both in the moment and historically, but his point of view is very patriarchal. While that might help him survive, for the story it means that the only women seen are shown in relationship to their husbands or as power-mad, stupid and out-of-touch with the new reality.

The lead up to which is supposedly happening right now. The description of the events that lead up to The End felt more like political agenda than story because it’s so close. YMMV.

What made me keep reading was the scenario. The concept that an EMP could wipe out our infrastructure was all too plausible. But at the same time, once that infrastructure was gone, the survival story reminded me all too much of other works, particularly Dies the Fire by S.M. Stirling and the classic Lucifer’s Hammer by Larry Niven.

The End ends on a cliffhanger; with Gordon, his family and his supporters setting out on a cross-country trek across the blasted landscape, with the prospect of fighting their way through militarized gangs and avoiding radiation-soaked destroyed cities.

Escape Rating C: In spite of its problems, I couldn’t put this book down. Once the story gets going, it really zips along.

Because this is an extreme survival story, most of the characters that we follow are more anti-heroes than heroes; they commit acts that would not be condoned in any other circumstances. It’s not just that a lot of people die as a result of the disaster, but all the focus characters kill, not just in self-defense, but sometimes as prevention of a possible threat, rather than reaction to an imminent threat.

Thank goodness there are no zombies, vampires or any other supernatural creatures involved. What made The End seem plausible is that the story completely focused on the unfortunate but all too realistic ability of humans to turn on each other, and the lengths that some people would go to survive at all costs. 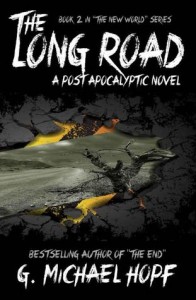 Michael is generously giving away a paperback set of both The End and book 2 in his New World series, The Long Road. This giveaway is open to US/CAN only
a Rafflecopter giveaway