Today I would like to welcome Eleanor Moran, who will be publishing the heart-wrenching friendship (and other things) story, The Last Time I Saw You (review here) later this month. Although I didn’t know this when I picked up the book, in addition to the TV series listed in her bio, she has also executive produced one of my favorite series, New Tricks. I knew I liked her writing, and now I know why! 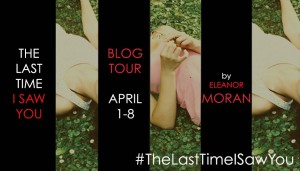 Q. What was your inspiration for The Last Time I Saw You? How did you first get the idea for the story? 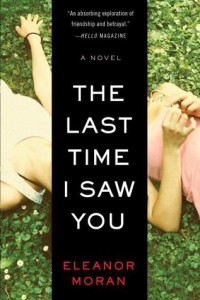 Q. Do you have a favorite character from the book? One who was a pleasure to right? Difficult?

A. I love all my characters! I fell in love with William, despite him being such a stuffed shirt. I sort of have to when I write a love interest. I loved the complexity of Sally, and I loved her, despite her selfishness and how bad she was for Livvy. She is mercurial and a trickster, and in drama those characters are vital. She can do unexpected, wild things. Livvy has a lot of me in her, as all my heroines do.

Q. If you could give just one piece of advice to fellow writers what would it be?

A. Gosh, I wouldn’t presume to advise other writers at my stage, but to newbies I would say… Do you know, I don’t know! Understand the market, but don’t be handcuffed by it, as you need to find your own voice.

Q. Who are your favorite authors? Who has inspired your writing?

A. I adore Rebecca. Daphne Du Maurier found something universal, and then wrote a deeply specific story. Beautiful Ruins. Loved that. The Fault In Our Stars. The Help. Heartburn. The Time Traveler’s Wife. For me it’s the books about rounded, flawed characters doing their very best in believable ways. If you look at my website – I wrote about my 10 favorite love stories. And romantic films.

Q. What’s next? Are you working on your next book?

A. I am hard at work on book 5. It’s about a young female psychotherapist who is forced to confront her past. 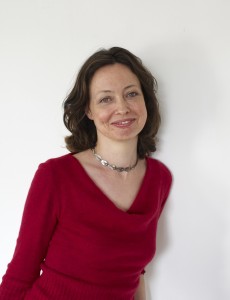 About Eleanor MoranEleanor Moran is the author of three previous novels: Stick or Twist, Mr Almost Right and Breakfast in Bed, which is currently being developed for television. Eleanor also works as a television drama executive and her TV credits include Rome, MI5, Spooks, Being Human and a biopic of Enid Blyton, Enid, starring Helena Bonham Carter. Eleanor grew up in North London, where she still lives.To learn more about Eleanor, visit her website or follow her on Twitter.

Eleanor is kindly giving away a copy of The Last Time I Saw You to one lucky winner. To enter, use the Rafflecopter below.

When Olivia Berrington gets the call to tell her that her best friend from college has been killed in a car crash in New York, her life is turned upside down. Her relationship with Sally was an exhilarating roller coaster, until a shocking betrayal drove them apart. But if Sally really had turned her back, why is her little girl named after Olivia?

As questions mount about the fatal accident, Olivia is forced to go back and unravel their tangled history. But as Sally’s secrets start to spill out, Olivia’s left asking herself if the past is best kept buried.

Sally Atkins was a star who burned bright and hot, and then flamed out. But The Last Time I Saw You both is and isn’t Sally’s story, because Sally isn’t the “I” in that title, she’s the “you”. The story begins with her death, and goes both backwards and forwards in time; back into Olivia Berrington’s memories of their intense friendship at university, and forward into a future that continues without Sally in it.

This is Olivia’s story, and the story of everyone who lived and died in the reflected glow cast by Sally’s incandescence.

Sally’s bright light has gone out. The story begins with her death in an auto accident. Her survivors are left with questions about how, and why, and can they go on? Especially Olivia, who used to be so close to Sally, and for Sally’s husband William and daughter Madeleine. Their world has gotten immeasurably darker.

But also become considerably more even-keeled. When Sally was up, she was all the way up. When she was down, she was completely down. When she loved you, you were the only person in her world, and when you fell out of favor, you were cast into the pit of oblivion.

Sally was bipolar, and she never revealed what she perceived as her weakness to anyone. She always cast every moment of her life as though she was the star, and any others were supernumeraries. And for those who weren’t willing to be hangers on in her life, she lied and she played off one against another, until she emerged as someone else’s victim. In reality, everyone was her victim, including herself.

And even though this is Olivia’s story, it is impossible not to focus on Sally.

In the wake of Sally’s death, Olivia finds herself dredging through her memories at the request of Sally’s husband William. He’s looking for good things to hold onto, in order to keep alive a vision of the perfect Sally who never was. All that Olivia finds is the relationship that set the pattern for her life. A pattern of settling for scraps and hoping she can placate the person she has allowed to control her life and well-being, and a pattern that she finally realizes she must break for good.

Escape Rating A-: I picked this story because of it’s theme of losing touch with people who used to be close friends, and the reasons that we let people go. It was a concept that resonated.

But what kept me enthralled was watching Olivia’s slow transformation, as she continues to learn from her relationship with Sally, and all the ways in which the intense insanity of that relationship continues to influence, even control. her life.

At first, I kept looking for one big betrayal to explain how Olivia and Sally lost touch, but as I kept following Olivia’s story, I came to realize that it was much more than that. It wasn’t a single event, but a pattern of betrayals over and over, and Olivia finally broke free. But only after she’d sacrificed a bit of her soul.

I felt for Olivia, the way that she kept repeating her pattern with Sally, much in the same way that a victim returns to their abuser, or recreates an abusive relationship. She kept trying to understand the other person, instead of figuring out that the person she needed to take care of was herself.

Although this is definitely not a romance, Olivia does find romance. I loved Olivia’s journey, but I’m not sure that the story needed to finish with a semi-traditional happy ending. Olivia figuring out who she needed to be would have been more than enough for me.