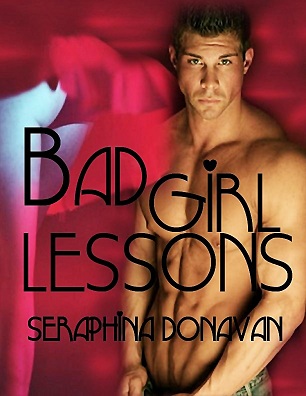 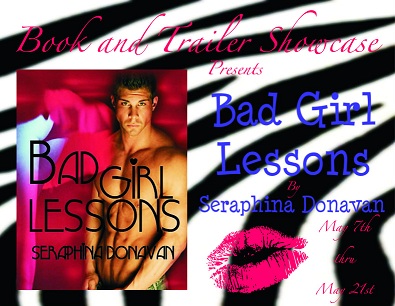 Where does a good girl go, when she wants lessons in taking a walk on the wild side? She goes looking for a bad boy to give her Bad Girl Lessons.

It’s not just an idea, it’s the title of a fun, sexy romp by Seraphina Donovan.

Jackson is the local heartthrob. Local football hero, and grown-up bad boy. Jackson’s always been her Evie’s friend, and nothing more. She might have always wanted more, but he’s always had prettier, skinnier girls available.

This time, Evie’s waiting on the dock outside his bar with an offer she’s hoping Jackson won’t refuse. She wants him to teach her to be a bad girl. And she doesn’t care what anyone thinks. She already knows she isn’t skinny enough for her mother, and she obviously wasn’t pretty enough for her fiancee.

He just left her at the altar while he ran off with her cousin. Evie is sitting on Jackson Cope’s dock in her wedding dress.

And Jackson Cope thinks that curvy, voluptuous Evie is the sexiest thing he’s ever seen. He always has. Always.

And the man who jilted her was his cousin Trevor. Whom Jackson hates with a passion. And it’s mutual.

Out there on that dock Jackson gives Evie a tiny taste of the pleasure she’s been missing. And then he lets her go to think about whether she really wants what she’s asked him for. Think about it with a clear head. Because he knows that once he finally gets the girl he’s wanted since he was fourteen, he’s never going to be able to let her go.

And he’s going to make sure she enjoys being a bad girl so much, that she forgets what it was like to ever be good.

There’s only a few problems with Jackson’s plan. After his cousin’s behavior, Evie can’t believe that any man would want her for keeps, let alone the town heartbreaker. She thinks Jackson is all about the fun.

And Trevor comes back for Evie, and not in a good way.

Escape Rating B+: This is one of those stories where you think you’re going to read just a little, and can’t stop until you’re done. If you’re looking for a story to sweep you away for an hour, this is a good one.

Evie is sweet and wounded, and the scene with her on the dock in her wedding dress is absolutely priceless. She’s hurt and angry and she wants to lash out and Jackson is her best friend and her deepest crush. She has absolutely nothing to lose at that point, so why not go for the one man she’s always secretly wanted? I really enjoyed watching Evie come into her own.

And Jackson? Every not-perfect princess wants to find a bad boy like Jackson who loves her just as she is. It was terrific to have a hero love a woman who was not a size 2 for a change.

Let’s just say that there is a romantic suspense element added when Trevor re-appears. And that Trevor gets everything that’s coming to him.