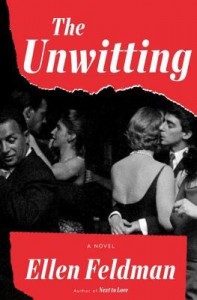 In CIA parlance, those who knew were “witting.” Everyone else was among the “unwitting.”

On a bright November day in 1963, President Kennedy is shot. That same day, Nell Benjamin receives a phone call with news about her husband, the influential young editor of a literary magazine. As the nation mourns its public loss, Nell has her private grief to reckon with, as well as a revelation about Charlie that turns her understanding of her marriage on its head, along with the world she thought she knew.

With the Cold War looming ominously over the lives of American citizens in a battle of the Free World against the Communist powers, the blurry lines between what is true, what is good, and what is right tangle with issues of loyalty and love. As the truths Nell discovers about her beloved husband upend the narrative of her life, she must question her own allegiance: to her career as a journalist, to her country, but most of all to the people she loves.

Set in the literary Manhattan of the 1950s, at a journal much like the Paris Review, The Unwitting evokes a bygone era of burgeoning sexual awareness and intrigue and an exuberance of ideas that had the power to change the world. Resonant, illuminating, and utterly absorbing, The Unwitting is about the lies we tell, the secrets we keep, and the power of love in the face of both.

I liked this book way more than I expected to, so don’t let the black and white cover fool you. This is one woman’s story of not just her marriage, or not even just life in the 1950’s and 1960’s, but also a hard look at the secrets and lies that make up a marriage. It’s also a story about the lies we tell ourselves, and the questions about whether the ends justify the means. Especially when those means are very, very gratifying.

The Cold War seems quaintly nostalgic from the vantage point of the mid 2010s, but in the 1950s the conflict between the democratic and capitalist West and the communist and totalitarian east was very real. It was also the source of endless spy thrillers that now seem equally quaint.

In the 1950s and early 60s, the war was called “cold” because it was mostly fought with propaganda and ideologies. When it occasionally turned hot it was fought through intermediaries like Korea and Vietnam. Because there was a very real fear that if the U.S. and the U.S.S.R. ever engaged each other directly, there would be nukes flying and not just the end of the world as we know it, but quite possibly the end of the world, period.

But except for the possibility of a nuclear strike, the resemblance between the Cold War and the Great Game of Empires that preceded World War I is quite chilling.

On a political scale, this has all happened before, and it will all undoubtedly happen again. But for our narrator, the writer Nell Benjamin, it is the story of the underpinnings of her life being pulled out from under her.

When her husband is killed on November 22, 1963, Nell starts a long slow journey to re-examine everything she thought she knew about her husband and her marriage.

No, this isn’t an infidelity story, or at least it’s not about infidelity to her marriage. What Nell discovers as she researches her husband’s life and eventual death is that Charles Benjamin was unfaithful to all of the principles that she held dear, and that he never told her.

Nell was a hard-writing member of the liberal intellectual elite. She rubbed shoulders with Mary McCarthy and Richard Wright, and believed that the government was too intrusive, too overprotective, and most of all, too authoritarian. Like many young intellectuals, she had flirted with the Communist Party in the 1930s. She marched in protests against segregation and for workers.

She thought her husband felt the same. He became the managing editor of one of the many liberal magazines that flourished in the 1950s. But Nell was “unwitting”; she had no knowledge that the magazine was a front for the CIA. In the wake of her husband’s death, she discovers that her husband, on the other hand, was all too “witting”, he knew exactly whose money he was taking and what he was supposed to publish to earn it.

Her discovery turns her marriage into a lie. So she finds herself remembering both what it was, and what she thought it was, as she tries to figure out what to tell her daughter, and the world, about the man who she thought was a hero, but may have been a villain. Or certainly was a stooge.

Escape Rating B: “The past is a foreign country: they do things differently there” is one of the thoughts that kept running through my mind as I read The Unwitting. I don’t remember the 1950s, although I do remember the tail end of the 1960s. And certainly the post-WWII years were very much alive in people’s memories as I was growing up.

Anyone who participated in a “duck and cover” exercise in the 1950s and 1960s in school remembers how very real the Cold War was. Certainly the Vietnam War, the Cold War’s bastard child, was the defining event of my high school years.

So we have Nell, living the privileged life of an intellectual at a time when being an intellectual was not considered a dirty word. At the same time, she experiences casual sexism at a level that grates the teeth today, but was a part of every woman’s life in the 50s, 60s and even 70s. Women and men look down on her because she continues to work while pregnant, and keeps her writing career after she has her daughter. it wasn’t done, and the social pressure was enormous.

She thinks she’s lucky; her husband is not just the love of her life, but they share political and social goals and aspirations. She feels like they are working together. Her world-view crumbles when she discovers that he has been working for the CIA all along.

Her journey is to realize just how much she fooled herself into not knowing and not discovering all those years she thought they were in sync.

In a story where the personal is political, and the political is personal, I felt for Nell and her journey. I could understand both how she fooled herself, and how her feelings about her life went through a tremendous upheaval when she was forced to confront those truths.

And even though the particular historic events may not feel relevant in 2014, Nell’s journey to self-discovery and repairing of her past certainly is.