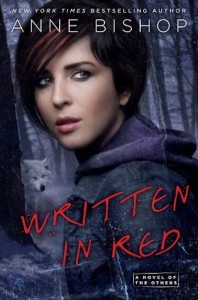 As a cassandra sangue, or blood prophet, Meg Corbyn can see the future when her skin is cut—a gift that feels more like a curse. Meg’s Controller keeps her enslaved so he can have full access to her visions. But when she escapes, the only safe place Meg can hide is at the Lakeside Courtyard—a business district operated by the Others.

Shape-shifter Simon Wolfgard is reluctant to hire the stranger who inquires about the Human Liaison job. First, he senses she’s keeping a secret, and second, she doesn’t smell like human prey. Yet a stronger instinct propels him to give Meg the job. And when he learns the truth about Meg and that she’s wanted by the government, he’ll have to decide if she’s worth the fight between humans and the Others that will surely follow.

Anne Bishop is a truly terrible writer. There is really no way to get around that fact. She’s overly fond of pig latin italics and Portentously Capitalized Common Nouns. You know going into her books that there will be utterly painful dialogue, rampant goth sensibilities, a whole lotta weird sexual shit, lazy world-building, and the Mary-est of Mary Sues.

It’s got dragons and unicorns and they all love her, and then when the cock-ring becomes too much he bites someone’s clitoris off.

Despite all of these blatant issues, Bishop somehow manages to remain hella entertaining. And so I picked up a copy of Written in Red. Maybe she’s turned over a creative leaf, maybe there will be something different in this series, maybe….. and I’m proven wrong in the prologue. Time to settle in and count the Bishopisms.

Escape Rating: D+ because there is nothing good about this book – and yet I read it all the way through. Anne Bishop remains inexplicably entertaining, despite showing no growth as a writer, or creative process deeper than a 13 year old’s livejournal.

Written in Red will pair well with a drinking game. Take a shot every time someone does something stunningly out of character because of Meg. Or every time Meg does something that would have gotten anyone else brutally killed, but is instantly forgiven.

A Murder of Crows will be released in 2014, during which I expect Meg will be threatened with rape, get laid, and instigate a war. Which will be decidingly won in Book 3 after the death of some redshirts nobody cared about anyways.

2 thoughts on “Review: Written in Red by Anne Bishop”