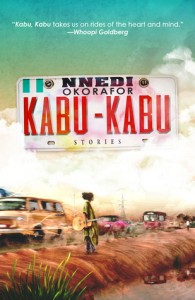 Picture a spider made of metal on an oil pipeline, standing attentively as it is serenaded by a woman. This is but one of the fantastical images that await the reader of Nnedi Okorafor’s short story collection Kabu Kabu.

One takes a taxi to get from one place to another, to make a transition of place. Kabu Kabu is full of transitions. The title story, written with Alan Dean Foster, tells the tale of a trip that a lawyer, Ngozi, takes from Chicago to a village in Nigeria to attend a family wedding. This would be an ordinary enough trip, save that Ngozi finds the one kabu kabu in Chicago and misses her flight, but ends up making a more fundamental trip through the byways of legends to her other home.

Some of the tales occupy the intersection of Nigeria, its colonizers, and those who are stripping it of oil. “The Magical Negro” is a little confection that turns the trope of that name on its head and answers the question of what would happen if a Magical Negro decides to stop putting up with being a secondary character in the tales of other, paler, folk. “Spider the Artist” is a science fiction tale that posits oil companies dealing with theft from the pipelines by installing killer, spider-like robots to patrol them. These monsters, created without regard for the people driven by desperation, make transitions of their own: becoming so smart that they take up agency on their own account (and declare war) — but also, at least in one case, becoming able to make connections with people through music. “The Popular Mechanic” explores another response to the pipelines snaking their way through the land, while “Moom!” takes a news account of a swordfish attacking a pipeline and… expands on it.

Several stories follow transitions of women from traditional roles to owners of their own tales. One set of stories (“How Inyang Got Her Wings”, “The Winds of Harmattan”, “Windseekers”, and “Biafra”) tell part of the tale of Arro-yo, a windseeker. “The Palm Tree Bandit” is an origin story for a super-heroine who defies norms by climbing palm trees… and then grows into a legend.

Other tales take incidents from the lives of the author, her sister, and her mother and recast them in a fantastic light. Once, Okorafor and her sister visited a house that had been built for their father… but whose contents had been stripped by relatives. They decided to nonetheless stay in the house for three days. “The Carpet” takes that incident and gives magical life to the noises in the night during their stay. “The Baboon War” takes her mother’s story of fighting of baboons on her way to school and adds a deeper layer: what if the baboons were protecting something along the path?

Escape Rating B+: This collection is a great introduction to Okorafor’s range as a writer of science fiction, fantasy, and magical realism. There is also a horror story (“On The Road”) that, while being really creepy, also portrays a woman’s transition from city cop to… someone new.

I recommend this collection to anybody who enjoys science fiction and fantasy, but who also is tired of some of the genres’ hoary tropes.