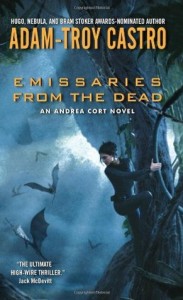 Two murders have occurred on One One One, an artificial ecosystem created by the universe’s dominant AIs to house several engineered species, including a violent, sentient race of sloth-like creatures. Under order from the Diplomatic Corps, Counselor Andrea Cort has come to this cylinder world where an indentured human community hangs suspended high above a poisoned, acid atmosphere. Her assignment is to choose a suitable homicide suspect from among those who have sold their futures to escape existences even worse than this one. And no matter where the trail leads her she must do nothing to implicate the hosts, who hold the power to obliterate humankind in an instant.

But Andrea Cort is not about to hold back in her hunt for a killer. For she has nothing to lose and harbors no love for her masters or fellow indentures. And she herself has felt the terrible exhilaration of taking life

Andrea Cort is considered a War Criminal by the standards of her society. Not because she participated in genocide, created weapons of mass destruction, or otherwise participated in a war. Andrea Cort has been a war criminal since the grand old age of 8, when she dared to survive the homicidal frenzy that whipped through and ultimately decimated her community.

The things that happened one night on Bocai had caused such a diplomatic firestorm that the authorities, including the Confederacy and the Bocaians themselves, had declared the survivors better off permanently disappeared.

I still don’t know what happened to most of the others. I suspect they’re dead, or still imprisoned somewhere. But I’d been shipped to someplace I don’t like thinking about, there to be caged and prodded and analyzed in the hope of determining just what environmental cause had turned so many previously peaceful sentients into vicious monsters.

My keepers spent ten years watching for my madness to reoccur. It had been ten years of reminders that I was an embarrassment to my very species, ten years of being escorted from room to room under guard, ten years of being asked if I wanted to kill anything else. The people who studied me during these years were not all inhuman. Some even tried to show me affection, though to my eyes their love had all the persuasive realism of lines in a script being read by miscast actors. Even the best of them knew I was a bomb that could go off again, at any time; if sometimes moved to give me hugs, they never attempted it without a guard in the room. Others, the worst among them, figured that whatever lay behind my eyes had been tainted beyond all repair, and no longer qualified as strictly human—and being less than strictly human themselves, treated themselves to any cruel pleasures they cared to claim from a creature awful enough to deserve anything they did to her.

Even freedom, when it came, came in a form of a slightly longer leash.

“We’ve gotten your latest test scores, Andrea. They’re quite remarkable. You deserve every educational opportunity we can provide for you. But we can’t quite justify letting you go. There are just too many races out there that don’t believe in pleas of temporary insanity, and unless we come up with some solution that stays their hand, they’ll do whatever they can to extradite you. But if you want, you can walk out of here and enjoy Immunity. All you have to do is allow us to remain your legal guardians, for the rest of your natural life.”

We meet Andrea well into her lifetime of servitude to the government that blamed a child for surviving a massacre, and subjected her to a cycle of hatred, rape, and torture before it realized the financial advantages of enslaving her mind in addition to her body.

Andrea is thus titled a Counselor – a Prosecutor for the Diplomatic Corps – authorized to conduct investigations into crimes occurring on various diplomatic bases, and prosecute the identified offenders. All while her supervisor continuously raises legal challenges to her Diplomatic Immunity and the criminals she prosecutes bask in their moral superiority over the Counselor busting them. They may sexually enslave their subordinates or brutally murder their colleagues, but they, at least, are not infamous War Criminals.

The primary plot of Emissaries for the Dead is pure murder mystery, as Andrea investigates the two deaths that brought her to the diplomatic nightmare that is One One One. These murders unexpectedly lead Andrea to uncover the long-buried truths of her past and the massacre that defines her existence. Both plots are skillfully intertwined and engaging, jumping with ease between the two so that we share Andrea’s fatigue and frustration at being forced to simultaneously juggle so many personal, professional, and political issues, but also cannot wait to discover what exactly is going on at One One One.

The supporting cast of characters, ranging from spies to victims to world-weary bureaucrats are as carefully developed as the protagonist. Andrea’s tendency to distrust ensures that she refuses to accept anyone at face value, and keeps digging until we have a full comprehension of each character we meet.

Adam Troy Castro creates an impressively vast world for Andrea to inhabit. There is never any doubt that she exists in a universe filled with hundreds of sentient species, thousands of governments, and one giant bureaucratic clusterfuck that barely manages to pull together the unified human front necessary for our species to navigate impossibly complex interstellar relations. He also manages to skillfully include one of the most apt descriptions (and criticisms) of administrative government that is as true today as it is in the future inhabited by Andrea Cort and the other denizens of One One One (just exchange the futuristic bonds to get off-world for modern student loan debt):

“As far as I’m concerned,” Lastogne said, with weary contempt, “the Dip Corps is a meritocracy in reverse. By its very design, nobody who sticks around is any good. The genuinely talented work off their bonds quickly thanks to incentives and bonuses. The incompetent get fined with extra time and find themselves shunted to more and more irrelevant assignments. Everybody in the great big mediocre middle, and everybody insane enough to fall off the scale entirely, winds up assigned to Management—and Management’s never been interested in really doing the job, not at any point in human history. Management’s true agenda has always been making things more pleasant for Management.”

Perhaps this is why the Diplomatic Corps went to such lengths to enslave Andrea? In the normal course of things, brilliant young minds such as hers flee government servitude, while she has been forced to embrace the slightly larger cage offered by her tormentors. I guess you’ll just have to read Emissaries From the Dead to find out!

Escape Rating A for Andrea Kicking Ass! In the end it is impossible to disclose too much about the plot without spoilers. It is safe to say that this War Criminal Turned Space Lawyer is a riveting read that you will not be able to put down. The world-building is top notch, the characters are fully-developed and consistent. The plot is a page turner that kept me up all night and forced me to immediately delve into Book 2, The Third Claw of God, which I will be reviewing next week. (Spoiler Alert: Loved It!)

One thought on “Review: Emissaries from the Dead by Adam-Troy Castro”