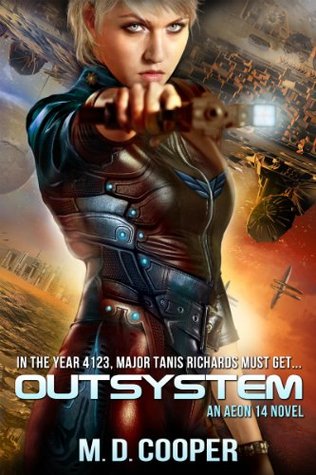 Major Richards needs to get out of the Sol System

Demoted by the military and hung out to dry, the media labels her the Butcher of Toro. Despite her soiled record, Tanis still one of the best military counter-insurgency officers in the Terran Space Force.

And they need her to find the terrorists responsible for trying to destroy the GSS Intrepid, a massive interstellar colony ship in the final phases of construction at the Mars Outer Shipyards.

It’ll be her ticket out of the Sol system, but Tanis discovers she is up against more than mercenaries and assassins. Major corporations and governments have a vested interest in ensuring the Intrepid never leaves Sol, ultimately pitting Tanis against factions inside her own military.

With few friends left, Tanis will need to fight for her life to get outsystem.

Serendipity is a wonderful thing. Amazon showed me this book at some point, trying to entice me into a Kindle Unlimited subscription; I didn’t buy the subscription, but at 99 cents, the book was a cheap read anyway. When I got to it, I opened it with no expectations at all, other than some geeky sci-fi.

It’s the 42nd Century, and Major Tanis Richards is part of a crack counter-insurgency and intel unit, but she’s gotten into trouble; she’s infamous, you see, for some awfulness she did a while back. We’re never told quite what she did, but her fame precedes her. Tanis is ready to leave the Sol system for good, on the greatest colony ship ever built. It’s a new age of colonization, and the Intrepid is the first of its kind: a ship that will carry huge colony ships to another star, then drop them off and return to Earth.  The colonists–and indeed much of the crew–will ride in stasis the whole trip.

Major Richards has gotten a spot on the colony roster; not, we may hope, that her skills as an intel officer will be needed. She’s ready to give up her long career in the military, and just be a colonist, but until Intrepid leaves, she’s in charge of security. And there are villains out there who do not want the mighty ship to ever launch! They quite-rightly see Tanis as the fly in the ointment that will keep them from destroying the giant interstellar vessel.

Escape Rating A+: This is my first foray into author M. D. Cooper’s Aeon 14 universe, and I’m seriously impressed. It’s a rich, solid milleu for the characters’ adventures. While mankind has progressed dramatically in 21 centuries from where we are now, even to having a ring around Mars, we still see the same human problems of greed and hatred, and the same diversity of thought and creativity that we do in our own world. The heroine of our tale, Tanis Richards, is a very, very competent, strong woman, dedicated to her job almost to a fault. She takes her lumps from the villains, but will not be silenced. Her life in the military rings true for anyone who’s been around the military for any length of time (Marines are still Marines, OOOH-RAH!), even down to bureaucratic nonsense getting in the way of the mission. This tale even has a little bit of a love interest, which Tanis must put off for a little bit while all the action happens.

I get it. Hard sci-fi isn’t for everyone, and neither is military fiction. Cooper manages to tell us a hard sci-fi story without swamping us in the details, and tells us a military story without burying us in jargon. Action, good leadership, intrigue, a slight touch of romance–it’s all in here, in a nice pleasant mix. There was one sour note for me: remember how Major Richards is in counter-insurgency and intel? She has to take measures to get some information out of someone–many, many lives are on the line, and she must break them, and quickly. Her methods are…unpleasant. But the scene is mercifully brief, and Richards clearly struggles with the necessity of doing what she does. It’s the only rough patch in what was, for me, a wholeheartedly great read. I’m looking forward to picking up more of M. D. Cooper’s work!