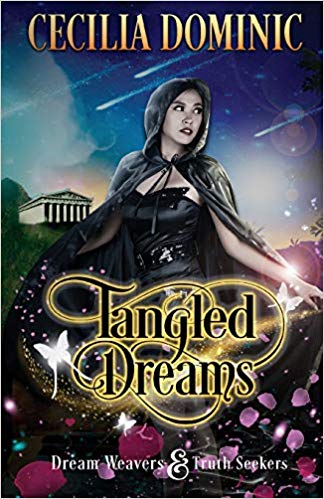 When the walls between reality and the dream world crumble, sleeping with the lights on won't save anyone from their nightmares.

Restaurant reviewer Audrey Aurora Sonoma's life is like a steakhouse meal: utterly predictable, comfortable, and just exciting enough to satisfy her independent streak. But when odd characters from her dreams show up during daylight hours - were-bats and a vegetarian dragon, of all things! - the menu goes from familiar to fusion. When she learns the job she accepted in her dream is real, well... Who would have guessed the goddess Persephone exists? Finding her - and figuring out why the walls between reality and the Collective Unconscious are slipping - seem to be impossible tasks for a mere mortal.

Damien Lewis turned down promotions to keep his life orderly and predictable. He has enough challenge with real-life hassles like eating regular meals. And forget dating. But after encountering three naked, delirious Jane Does on consecutive nights, he suspects more than drugs are behind their appearances, and he soon becomes much more involved than he'd like.

As the walls between the Collective Unconscious and real world continue to erode, vampires, demons, and, of course, were-bats come through to prey on those who get in the way of the god who is masterminding it all with human help. Can Audrey and Damien face their biggest fears and work together to stop the waking world from being overrun by creatures that no human has dared to dream of? Or will their nightmares become real - and permanent - when the pathways open for good?

Audrey Sonoma is a restaurant critic, just trying to get by. It’s going well, for now, but then she starts…hearing things. Things that aren’t there. Lt. Damien Lewis is a beat cop, who’s had a bit of a novelty the last three nights: he’s picked up three different women, wandering around, speaking gibberish. One of them was naked, even. But none of them seem to be on drug trips.

Unbeknownst to these two strangers, the lines between the waking world and the place of dreams that we all share are being eroded. But why? What force is doing this, and to what end? Gods and goddesses of old are wandering around loose on the streets of a Georgia city, and something’s got to be done, before mayhem breaks loose!

Escape Rating: B: It took me a little bit to catch on to the premise here; the Collective Unconscious is that place where we go when we dream. The Greek pantheon (and, presumably, others) live there. Most of us don’t really control what happens in our dreams, but a few souls can: the Dream Weavers. Audrey, is, of course, one of these, which she finds out in the course of things. Zeus himself is trying to get out of the Collective Unconscious, so he can run things in our world, and he’s found an ally to help him do it.

Tangled Dreams is classed as a “paranormal romance,” but to this reader’s mind, it was strong on the “paranormal,” but a little short on the “romance.”  Yes, there’s that steamy dream they both have, only realizing later that they’d ended up “together” in the Collective Unconscious, but the chemistry and heat that I normally expect from a romance just wasn’t as strong as it perhaps could have been.

We’ve certainly got a great paranormal action/adventure story, and there’s a bit of whodunnit factor for a while, as our heroes try to figure out what’s going on around them. But while they’re both rather-obviously interested in each other, Audrey in particular has a bit of a thing about dating cops: they might not come home some night, so they’re really not a good prospect. She harps on that point internally a lot. I get where she’s coming from, but it’s a bit of overkill. Damien is convinced that he doesn’t need a woman in his life, and makes much of that in his own internal dialogue.

When Audrey meets the feisty Aphrodite, stuck in our world, the goddess knows, of course (Goddess of Love, remember?), and has Cupid shoot poor Damien, who falls head-over-heels, googly-eyed in love. This makes Audrey uncomfortable when she realizes it, as Aphrodite’s interference just confuses the situation for her, and when Damien figures it out, he’s greatly pissed about it.

He wonders, is the love he feels for Audrey real, or the product of Cupid’s arrow? Much is made of the fact that Cupid’s power is enhancing what’s already there, not creating love out of nothing, but he feels trapped. For Audrey’s part, she’s got a boyfriend (tropey, little-seen Kyle, who is, of course, cheating on her) that she’s not yet officially broken-up-with, so she’s feeling very conflicted about the tasty steel-eyed cop, herself. We’re given a happy ending, of course, but it seems a little bit contrived to me, with one last bit of interference from Aphrodite, reminding them both that they’re perfect for each other. How she knows this is unclear, but she’s the goddess here, so let’s trust her meddling soul, and go with it.

I struggled a bit about how to approach this book. I wanted to say I really disliked it, because of the awkward chemistry between our heroes and the lack of steam-factor, but I liked the action/adventure story that we’ve got underlying this book; it’s an unusual premise, and one that the author spent a lot of time and words developing into an interesting setting. I wanted to say I really loved it, but the chemistry and heat of this book was just lacking for me, as a romance reader.

Your mileage may vary, of course, but I feel that if the author had as much invested in her protagonists as she did her setting, it might have been a better, longer book. If you’re a die-hard paranormal fiction fan, give this one a read. It’s got some fun depictions of ancient gods and goddesses, in a novel setting. But if you’re looking for heavy romance, this one may come up short for you.