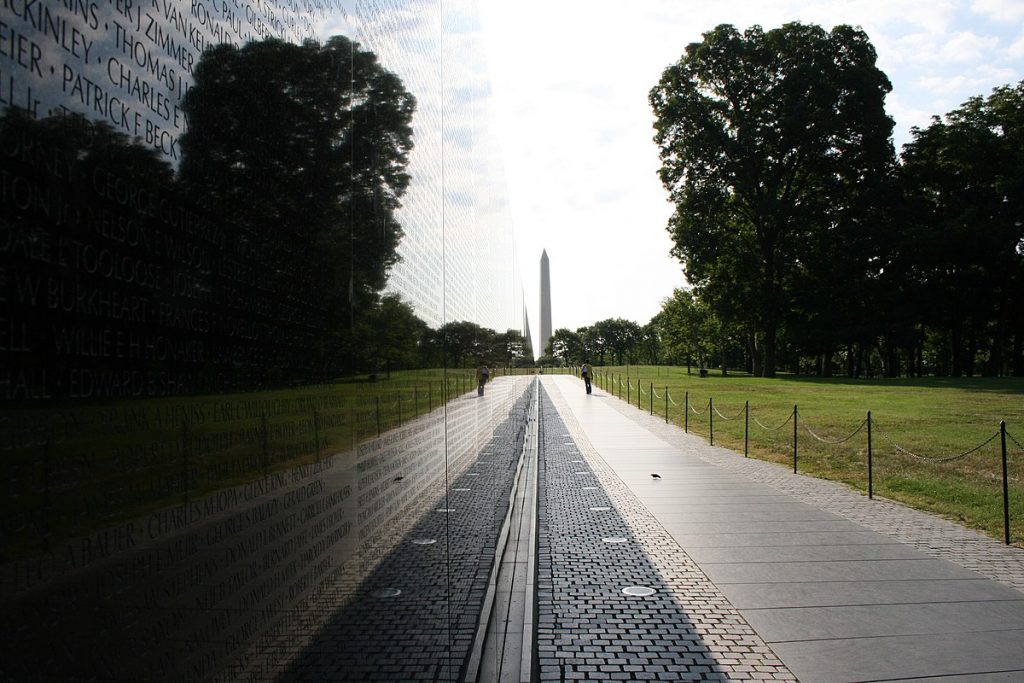 My black face fades,
hiding inside the black granite.
I said I wouldn’t
dammit: No tears.
I’m stone. I’m flesh.

A white vet’s image floats
closer to me, then his pale eyes
look through mine. I’m a window.
He’s lost his right arm
inside the stone. In the black mirror
a woman’s trying to erase names:
No, she’s brushing a boy’s hair.

From “Facing It” by Yusef Komunyakaa.

Grandfather died in 1919 and it would be a number of years before the graves of World War I veterans appeared. Meanwhile the white cemetery from our back door to Chapel Hill Road and beyond was filled with the Confederate dead. Every Memorial Day or Decoration Day, the cemetery was dotted with crossbarred Confederate flags. As a Union veteran, Grandfather was entitled to a Union flag for his grave, so every May I walked proudly through a field of Confederate flags hugging my gold-pointed replica of Old Glory. I crossed Chapel Hill Road to the Fitzgerald family burial ground and planted it at the head of Grandfather’s grave.”

From Proud Shoes, a memoir by Pauli Murray, civil rights activist and first African American woman to be ordained to the Episcopal priesthood.

The ghosts of American soldiers
wander the streets of Balad by night,
unsure of their way home, exhausted,
the desert wind blowing trash
down the narrow alleys as a voice
sounds from the minaret, a soulfull call
reminding them how alone they are,
how lost. And the Iraqi dead,
they watch in silence from rooftops
as date palms line the shore in silhouette,
leaning toward Mecca when the dawn wind blows.

“Ashbah” from Here, Bullet by Brian Turner, veteran of Bosnia and Iraq.