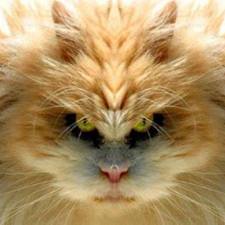 Google can be so pedantic sometimes.  The search for “How to pill a cat” returns “About 17,400,000 results”.  I was not filtering out the jokes.  I was serious.  Last night was the first time I had to pill a cat in a long time.  And it was about as much fun as I remembered.

First of all, they know. Whenever you approach them with the intent to do something they won’t like, they are gone in a flash. I was expecting “All-Star Cat Wrestling”.  I had forgotten that it would be the second act of the double-bill, preceded by that ever-popular favorite, “The Amazing All-Star Cat Chase”, co starring the local versions of the Keystone Kops, namely Galen and yours truly.  The process is never helped by the fact that the humans do not really want to hurt the cat, and the cat firmly believes that he, in this particular case, is being tortured. 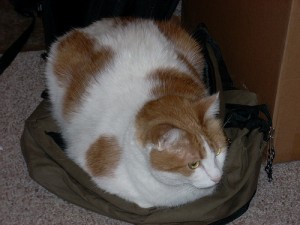 Erasmus used to be a 16 pound cat. That was generally considered by vets everywhere (and we’ve been everywhere) to be a bit on the pudgy side, even for him.  He’s a rather big-boned, long-bodied cat.  He should be big, just not that big.  But since January, he’s turned into an 11 pound cat, and we don’t know why.  He’s 12 years old, so a healthy middle-age for an indoor cat. Galen and I suffered from different, equally horrible fears about what might be wrong with him. We lost Scheherazade to hepatic lipidosis in Anchorage. It was sudden and devastating. My baby Licorice lived with diabetes for more than 5 years, and I lost him when he was 17, after he survived my first marriage, moving across three states, and he let me cry into his fur when I lost my dad.  For those who believe, Licorice is the cat waiting for me at the Rainbow Bridge. And Jennyfur, who died of cancer at 14, is with him, because she was Licorice’s cat.  Not my cat, HIS cat. She thought he made the sun rise. 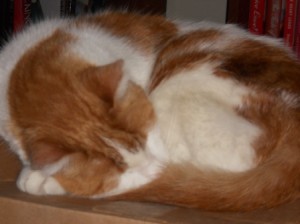 But right now, Erasmus has a problem. Actually he has two problems. First, something is medically wrong. He is too thin. His hipbones and spine bumps are visible. But he acts as if he’s fine.  But the vet checked him out, and so far, all we know is what it isn’t.  It isn’t diabetes.  It isn’t his thyroid.  Nothing showed up on the x-ray.  But his white cell count is elevated. Hence the pills.  If it’s an infection, then maybe antibiotics are the answer.

The problem with him being skinnier, is that now he can run.  And he has LOTS more places to hide.  And all the boxes we’re getting together have created even more hiding places than normal.  After chasing him around the house, twice, we blocked him in the Florida room (Florida rooms are finished porches in, well, Florida) and wrapped him in a towel.  He squirmed out.  Then he squirmed into the towel, and buried his face.  Then out. Over and over.  He dug his claws into my leg, even through my jeans.  This was one of the times when I was sorry dragonhide wasn’t available. 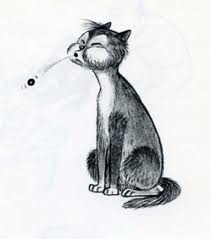 After this came the truly disgusting part.  Clamping the cat’s head in your hand, forcing its mouth open, with all those lovely carnivore teeth, and poking the pill as far back you can with your very vulnerable finger.  Then you hold the cat’s mouth firmly closed and massage their throat until you hope they’ve swallowed the damn pill.  And you are inevitably wrong.  As soon as you let go of the cat’s jaw, they WILL spit out the pill. And it’s slimy and disgusting.  And you know you have to go through the whole process again.  We were lucky.  We only had to poke the icky pill into his mouth twice more, and we didn’t let him go between tries.  The third time I just kept his mouth closed until the stupid pill melted in his mouth, since it was halfway there already.  YUCK.  And we have to do this 13 more times.  Is this Friday the 13th or what?

Meanwhile, the human who has just committed the torture is practically in tears.  I was terrified that he would never forgive me for tormenting him.  But this morning, he hopped into my lap just like he always does, and dropped off for his morning nap.  So far, all is well on that front. 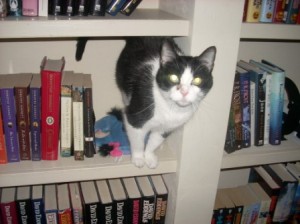 Erasmus’ second problem is his sister LaZorra.  Because Erasmus went to the vet and she didn’t, LaZorra goes into her “Growltigger” act every time she sees him.  Erasmus, big baby that he is, has no idea what he’s done wrong. LaZorra has earned herself a trip to the vet on Monday when Erasmus gets an ultrasound and a checkup on his bloodwork.  Maybe if they both come back home smelling like the “awful vet place”, she’ll stop acting like a witch.  But maybe not.  I’m firmly convinced that she IS a witch. 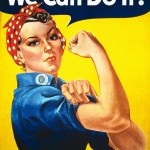