It’s still not Wednesday. But it might be when you read this. Or it might be Sunday, which is when I happened to get around to it this weekend.

Or a “round tuit”. I actually used to keep one of those in my desk.

This Sunday I have one each. One book not yet out that I want, and one already out that I just heard about. A little story before, first.

I haven’t read the latest Stephanie Plum book, Explosive Eighteen. I probably will. Or I might listen to it on audio. I’ve discovered that audiobooks make working on Ebook Review Central go faster. And I discovered Stephanie on audio, so that might work better all the way around.

But the Lizzy and Diesel books, the slightly paranormal spin-off series, is only on book 2. It hasn’t yet descended into the endess “Ranger or Morelli” triangle thing Stephanie has been doing for ages. I’m still interested in Lizzy and Diesel’s story. If you’re trying to figure out where Diesel fits in, Diesel appears in the seasonal “Between the Plums” novellas of the regular series, so he’s been around. Wicked Appetite was the first of the Lizzy and Diesel series, if you want to start at the beginning. Here’s the blurb for the second: 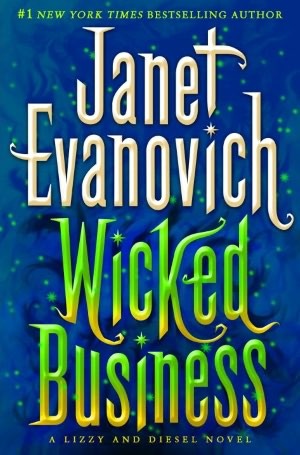 Whether it’s monkey business, funny business, or getting down to business, Janet Evanovich’s Lizzy and Diesel series proves that there’s no business like Wicked Business.

Lizzy Tucker’s once normal life as a pastry chef in Salem, Massachusetts, turns upside down as she battles both sinister forces and an inconvenient attraction to her unnaturally talented but off-limits partner, Diesel.

When Harvard University English professor and dyed-in-the-wool romantic Gilbert Reedy is mysteriously murdered and thrown off his fourth-floor balcony, Lizzy and Diesel take up his twenty-year quest for the Luxuria Stone, an ancient relic believed by some to be infused with the power of lust. Following clues contained in a cryptic nineteenth-century book of sonnets, Lizzy and Diesel tear through Boston catacombs, government buildings, and multimillion-dollar residences. On their way they’ll leave behind a trail of robbed graves, public disturbances, and general mayhem.

Diesel’s black sheep cousin, Gerwulf Grimoire, also wants the Stone. His motives are far from pure, and what he plans on doing with the treasure, no one knows . . . but Lizzy Tucker fears she’s in his crosshairs. Never far and always watching, Grimoire has a growing, vested interest in the cupcake-baker-turned-finder-of-lost-things. As does another dangerous and dark opponent in the hunt—a devotee of lawlessness and chaos, known only as Anarchy.

Treasures will be sought, and the power of lust will be unmistakable as Lizzy and Diesel attempt to stay ahead of Anarchy, Grimoire, and his medieval minion, Hatchet, in this ancient game of twisted riddles and high-stakes hide-and-seek.

There’s a book already out that I also want. I’m a fan of Sherlock Holmes. (This comes under the heading of “well, duh” for any long-time reader of this blog). Recently, Sir Arthur  Conan Doyle’s home, Undershaw, was under threat of being torn down. Among other efforts, a book of short stories in honor of Sherlock Holmes was written to help fund the campaign to underwrite the Undershaw Preservation Trust.

The book is Sherlock’s Home: The Empty House.

This is one I would want just for the cover, but of course I’m interested in the stories and the cause it supports. Housing developments don’t last. Holmes is forever.