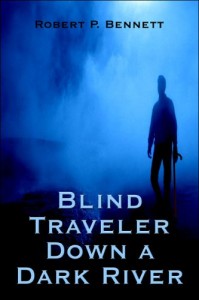 Douglas Abledan is a blind man using a GPS unit to navigate the world. One day the device malfunctions. He stumbles upon the scene of a murder about to take place. Due to the confusion caused by the failure of his technology, it isn’t until he hears a radio announcer reporting an accidental shooting that pieces start falling into place. Unable to convince authorities to look into the matter, he launches his own investigation. In the year 2021 increasing global earthquakes threaten civilizationas infrastructure. Unimat Incorporated is trying to stop the destruction by introducing a new building material. Special interests are up in arms. Environmentalists blame technology for the problem and want a different solution. Steel workers worry about jobs and safety. Now someone has hired a contract killer to stop the project. How can Abledan expose the killer without becoming a target?

Blind Traveler Down a Dark River is a near-future murder mystery. I wanted to settle into following the amateur detective as he solved the mystery, but the near-future part kept tugging at my willing suspension of disbelief until it got partially resolved. Why? Because the reason for the murder hinged on it.

The reader needs to accept that this near-future earth is close enough in time that the 1990s GPS satellites are still used as a historical touchpoint, but earthquakes have increased in frequency all over the planet, and faultlines that are currently dormant, have become violently active.

It turns out that the earth’s magnetic poles have reversed. Again. A once every 700,000 years or so event. But okay, I read science fiction. I can go with this. It’s an explanation. I just needed it a little sooner in the book than half-way through.

Back to the story. About those GPS satellites…take GPS technology and imagine how far it can go into the future. What if everything had an active GPS tag, including moving vehicles.  Including people. If cars could sense other cars, buildings, and people, then cars wouldn’t need drivers. Driver-less taxis and buses.

Personal GPS devices. Personal navigators for the blind. Better than any cane, even one with radio and sonic devices. Not as cuddly as a dog, but with a much longer life expectancy.

What happens if the programming on the navigator glitches, and gets its signals from the wrong street? A person might walk into traffic instead of away from it. A person might “witness” a murder they didn’t see. And no one would believe them.

That’s what happens to Douglas Abledan. A blind computer genius who figures out that the event he witnessed was a murder, and not the drive-by shooting the police claim it was. Abledan knows all about drive-by shootings, and exactly how much, or how little effort the police put into solving them. He lost his sight in a drive-by shooting.

He’s compelled to solve this murder. No matter what it takes. And no matter how much his  lack of sight, lack of experience, and lack of resources hamper his investigation.

Then there’s the murder he’s investigating. Earthquakes can be devastating, particularly when they are hitting densely populated areas that contain buildings that were never intended to be earthquake-resistant. People are dying (Think of the 1906 San Francisco earthquake and move the devastation to 21st century New York City. Groan loudly for emphasis)

But changing construction materials and methods always causes disruption to jobs. A lot of power and money is involved. Secret government project money, environmental protest groups and union bosses afraid that union members will lose out if new materials use different processes. There’s more than enough motives for murder.

Abledan is going up against some very big boys and girls. And he can’t even see them coming to get him.

Escape Rating C+: The setup is interesting, once you get past trying to figure out when this takes place and how the world got into the fix it’s in. I had the feeling that the author had some very cool ideas, and needed certain tech in place to make them work. As a reader, I just needed to know how the world got that way much earlier.

Douglas Abledan is an amateur detective who gets caught up in the thrill of the chase. As such, he’s a member of a long line of private eyes, no matter how ironic that moniker might be in his case. For this series to continue Abledan needs to have a few more people to interact with who are a little more sympathetic than Speckler, the researcher who helps him figure out some of the ins and outs of his Navigator.

I found the reasons for the murder all too believable, with or without the near-future technology. But then, human nature doesn’t change. What made the story different was the detective. Douglas Abledan working both with his limitations, and rising above them. Also his determination to solve this crime, because his own case was never resolved. 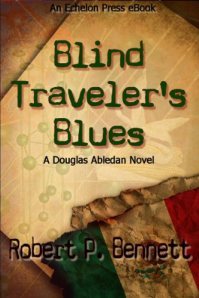 Abledan’s amateur sleuthing continues, and gets more wrapped in the problems of the near-future world he inhabits, when he goes on vacation to Chicago in Blind Traveler’s Blues. Take a look at my review on Book Lovers Inc for the details of how earthquakes in the Windy City, murder and eco-terrorism, stir up more adventures.

One thought on “Review: Blind Traveler Down a Dark River by Robert P. Bennett”