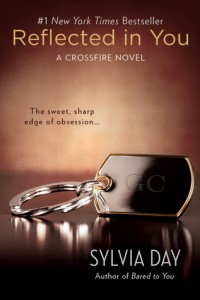 Gideon Cross. As beautiful and flawless on the outside as he was damaged and tormented on the inside. He was a bright, scorching flame that singed me with the darkest of pleasures. I couldn’t stay away. I didn’t want to. He was my addiction… my every desire… mine.

My past was as violent as his, and I was just as broken. We’d never work. It was too hard, too painful… except when it was perfect. Those moments when the driving hunger and desperate love were the most exquisite insanity.

We were bound by our need. And our passion would take us beyond our limits to the sweetest, sharpest edge of obsession…

Most reviewers are going to talk about the sex. And yes, there’s a lot of it. 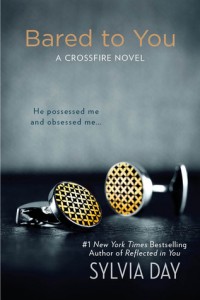 The main characters in Reflected in You, (and in the first book in the Crossfire series, Bared to You) are both survivors of sexual abuse. Eva was abused by her stepbrother for four years, from when she was ten until the age of fourteen, when she had a miscarriage. Nathan, shamed her into keeping it a secret from her mother and his father. She was ten, she was a child.

Eva still has nightmares and she’s still recovering. She probably always will be. But she’s healing.

Whatever happened to Gideon, we don’t know. But he was definitely sexually abused by someone in some way. He just won’t talk about it. He certainly has the nightmares to prove it happened. The one thing that is clear is that no one believed him at the time. Not even his parents.

Unlike Eva, Gideon was betrayed by the adults who should have stood by him without question.

This is the crucial difference. Eva does trust some people. She has a damn hard time trusting men in relationships. Those go wrong for her. And she sabotages them because her history confuses sex and trust and pain in a lot of understandable ways.  But she does know how to have other kinds of relationships that involve love and trust.

Reflected in You is the angst book. Everything in their relationship seems to be going wrong. These two broken people are addicted to each other. Emotionally and very definitely sexually. They seem to need to be together to be functional.

Except that Gideon has always kept secrets. He can’t or won’t tell Eva much about himself, and certainly nothing about what happened to him. Then he pulls away from her. Almost completely.

And Eva spends a good bit of the book going not so quietly nuts. She learns to function. She does her job and starts healing all over again. But we see a lot in her head and it’s an extremely angsty place.

It’s only at the end of the book that we find out why Gideon pulled away, and what he was taking care of while he was emotionally offstage and driving Eva crazy.

Escape Rating B: Reflected In You spent way too much time angsting and not nearly enough time doing things. Most of the book followed Eva dealing with the shock of Gideon pulling away from her. While it was important for her psychological health, it wasn’t as fascinating as what Gideon was actually doing, which we don’t find out until the very end.

What bothers me is that the real action in this story is offstage, and wraps up in relatively few pages. It becomes anti-climactic by the way it’s handled, and it unfortunately needs to be, because of what it is. There is too much that can’t be confessed. Reflected In You would have been a lot more interesting (and suspenseful) to this reader if it had followed what Gideon thought, or particularly did, instead of just Eva.

And if Eva is really going to be the heroine of her own life story, and not the protected princess, she needs to hear about the actual dangers that surround her when they happen, not after the fact.