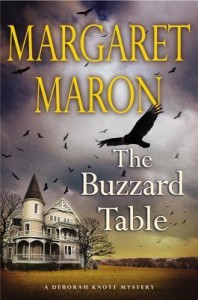 Judge Deborah Knott and her husband, Sheriff’s Deputy Dwight Bryant, are back home in Colleton County amid family and old friends. But the winter winds have blown in several new faces as well. Lt. Sigrid Harald and her mother, Anne, a well-known photographer, are down from New York to visit Mrs. Lattimore, Anne’s dying mother. When the group gathers for dinner at Mrs. Lattimore’s Victorian home, they meet the enigmatic Martin Crawford, an ornithologist researching a book on Southern vultures. He’s also Mrs. Lattimore’s long-lost nephew. With her health in decline, Mrs. Lattimore wants to make amends with her family-a desire Deborah can understand, as she, too, works to strengthen her relationship with her young stepson, Cal.

Anne is charmed by her mysterious cousin, but she cannot shake the feeling that there is something familiar about Martin . . . something he doesn’t want her or anyone else to discover. When a string of suspicious murders sets Colleton County on edge, Deborah, Dwight, and Sigrid once again work together to catch a killer, uncovering long-buried family secrets along the way. 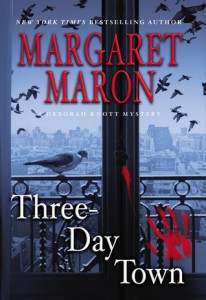 A visit with Judge Deborah Knott is my Thanksgiving treat every year, although usually not with buzzards looking over my shoulder. Or over Deborah’s shoulder. Last year we were in New York for Three-Day Town and it was fabulous (see review), this year Deborah is back home in North Carolina.

Margaret Maron’s Deborah Knott series is an excellent mystery series, usually set in Colleton County North Carolina, involving the crime-solving skills of Ms. Knott, who now sits on the county bench as a judge. In her first outing, Bootlegger’s Daughter, Deborah was just a lawyer, and she was, and is, that bootlegger’s daughter. One of her fears is that someday her daddy will appear before her in court, but it’s not likely. Her daddy is in his 80’s, and doesn’t seem to be operating a still any longer.

The events in The Buzzard Table strike much closer to home for Deborah. Her cousin, Lt. Sigrid Harald, is down from New York, along with Sigrid’s mother Anne Harald, because Anne’s mother is one of the grand old ladies of Colleton County, and she is dying of cancer.

Another family member is visiting, a long-lost cousin. Martin Crawford is staying on the estate, studying Southern vultures. In other words, Martin is an ornithologist who studies buzzards. He’s also a photojournalist.

So is Anne Harald. Anne is an award-winning photojournalist, and there is something about Martin Crawford that seems familiar…she just can’t place where she’s met him before in a life that has been full of travel, chance-met people and exotic places.

But Sigrid Harald, skeptical New York cop that she is, is suspicious. She knows that Martin Crawford is lying about something.

Then people start dying, and Martin’s excuses and alibis seem just a shade too contrived. Especially when the buzzards give him away.

Escape Rating B+: The reasons behind the murders turned out to be chilling, but I don’t want to give the game away.

The build-up to finding out what was going on was a bit slower than is usual for this series. I think that may be because neither Deborah nor Sigrid was in actual danger this time. While that’s more realistic, it does drop the suspense factor down just a bit.

I definitely enjoyed seeing the development of Deborah’s relationship with her stepson Cal. That ended the story on a high note. 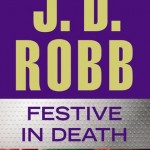 One thought on “Review: The Buzzard Table by Margaret Maron”