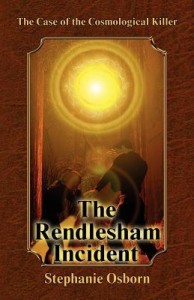 The Rendlesham Incident
In 1980, RAF Bentwaters and Woodbridge were plagued by UFO sightings that were never solved. Now a resident of Suffolk has died of fright during a new UFO encounter. On holiday in London, Sherlock Holmes and Skye Chadwick-Holmes are called upon by Her Majesty’s Secret Service to investigate the death. What is the UFO? Why does Skye find it familiar? Who – or what – killed McFarlane? And how can the pair do what even Her Majesty’s Secret Service could not? 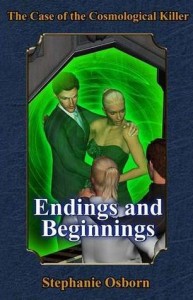 Endings and Beginnings
After the revelations in The Rendlesham Incident, Holmes and Skye find they have not one, but two, very serious problems facing them. Not only did their “UFO victim” most emphatically NOT die from a close encounter, he was dying twice over – from completely unrelated causes. Holmes must now find the murderers before they find the secret of the McFarlane farm. And to add to their problems, another continuum – containing another Skye and Holmes – has approached Skye for help to stop the collapse of their own spacetime, a collapse that could take Skye with it, should she happen to be in their tesseract core when it occurs.

I’m going to combine my reviews of books three and four in Stephanie Osborn’s Displaced Detective series because they read as one “case” even though they were divided into two books. The stop between book 3 in the series; The Rendlesham Incident and book 4; Endings and Beginnings, felt a tad artificial to me. Your mileage, of course, may vary.

And if you haven’t read the first two books in this series, and you enjoy Sherlock Holmes adaptations, start with The Case of the Displaced Detective: The Arrival and At Speed, previously reviewed. (A new omnibus edition including all 4 ebooks has just been released to make this easier) The game is definitely and marvelously afoot!

The case that Holmes and Chadwick have to solve is quite marvelously convoluted; a farmer in Suffolk, England has died of fright during a UFO encounter. The whole thing is of course patently ridiculous, and yet, the man is quite definitely dead.

And the whatever it is, UFO or not, is showing up on radar and all sorts of other high-tech instrumentation, moving at speeds that current aircraft, even top-secret military aircraft, are simply not capable of. Something is going on that is making some alphabet agencies extremely nervous. There are secret intelligence bases under the green fields of Suffolk, and that “UFO” is spooking MI-5 and MI-6. These are not the kind of people who enjoy being nervous. They much prefer making other people nervous.

The Intelligence services do something, well, intelligent. They request that Holmes and Chadwick come to Suffolk to investigate these strange happenings.

So they re-direct their honeymoon trip to London into an investigative trip to Suffolk. And thereby hangs a case. As well as a book or two.

And if you, like me, think that one version of Holmes is fun, just wait until you try it with two!

Escape Rating B: This series is solidly fun. If you enjoy Holmes’ stories, it’s an absolute blast. This one reads like an action-adventure story with romance added to give it flavor, and there were a few points where I expected a version of Indiana Jones to show up just for more fun.

The first half of the Rendlesham Incident is mostly taken up with wedding and honeymoon arrangements and the romantic aspects of the relationship between Holmes and Chadwick. I enjoyed that part, it’s the payoff for having watched them struggle to figure out whether they could manage a relationship. While it takes up a lot of book, I would have felt cheated if these issues hadn’t been resolved.

Also, it was a great setup for introducing the other version of Holmes and Chadwick, the ones who didn’t figure out how to have a romantic partnership, and just how badly they screwed up their lives. The fact that in their continuum, they didn’t avert the sabotage and made their world much messier only adds to their stress, but we get to see different versions of the relationship.

Also the sabotaged continuum resulted in a sabotaged tesseract which is having a ripple effect across spacetime. It’s case number one, so we see the two couples working together to avert one major crises while watching each other to see what might have been in its various permutations. This part is excellent.

Then we have the crazy case of the man who supposedly died of fright. This one turns out to be of very worldly motivations. No, he didn’t die of fright, he died of radiation poisoning. Holmes has to investigate the source of the radiation. What got buried in Suffolk during World War II and what certain idiots think got buried in Suffolk during WWII are quite dangerous worlds apart. This case was the point where I was half expecting Indiana Jones.

What I got was Dr. John H. Watson. His appearance was marvelous and sweet and amazing. But it slightly tripped my willing suspension of disbelief meter. Both Moriarty and Watson were real in this universe but not Holmes. I’m not sure Holmes would take that case.

But I still enjoyed every flick of every page, so I’m thrilled there will be more.