OK. This is all the stuff that didn’t fit into last week’s Stacking the Shelves. I think I’m caught up now.

We binge-watched both seasons of Longmire, and, of course, it made me want to run out and get all the books.

My name is Marlene and I’m a bookaholic, or biblioholic, if you want to make it sound more pretentious. (Foz Meadows’ post yesterday was particularly on point)

I like having choices when I’m picking my next book to read. And they all look so yummy. 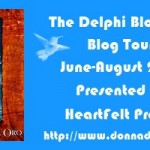