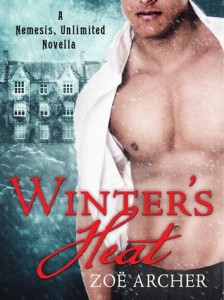 An auxiliary Nemesis agent and a former client go undercover as servants at a country estate during the Christmas season to expose corruption among London society’s powerful elite. Michael and Ada never thought they would again be working side by side in the pursuit of justice. Now that they’re on a case together, the attraction they had once shared flares to life, making a dangerous assignment even more unpredictable. Can they take the heat?

Yes, I know this is supposed to be a Christmas book. Think of it as icy-hot. The descriptions of the weather in England in December should make you feel a little bit cooler as the weather outside moves to summer.

And the romance is more than enough to make any reader think very warm thoughts!

Winter’s Heat is a bit of a second-chance-at-love story, mixed with shades of both Downton Abbey and Leverage.

The explanation of what Nemesis Unlimited does is contained in book 1 in this series, Sweet Revenge (reviewed here). They provide justice for people who can’t otherwise get it from the courts. A lot of their clientele comes from the “service grapevine”. In Winter’s Heat, the case is to find a way to make a nasty pair of aristocrats pay for the way they turned an orphanage into a children’s workhouse, and then managed to slither out of any criminal charges with all the profits.

To provide them with their just desserts, Nemesis sends out two agents with experience in service in a country house (shades of Downton) to infiltrate the upper crust family Christmas. Everyone is certain that there is a way to make them pay, but it will need investigation and courage to find it.

The agents don’t just have experience in service, they have experience with each other. Six months previous, Ada was the servant who sent in an anonymous request to Nemesis in return for justice for a friend. And Michael was the agent sent to help her. They weren’t supposed to fall for each other. And when they did, Michael wasn’t supposed to disappear without a trace for six months.

She thinks that he was just using her as a dalliance. He knows he was stuck on a mission where revealing his whereabouts might have meant his life. But that doesn’t erase Ada’s feelings of abandonment.

She does not fall into his arms when he shows up as the agent in charge of her new assignment. Not even after he manages to tell her where he’s been. Michael has a lot of fences to mend.

And they have a case to crack. Ada is working for Nemesis on just this one case, to pay them back for the help they gave her friend. But the more involved she gets with the investigation, the more she realizes that righting wrongs and ferreting out evil is exactly what she was meant to do–with or without Michael’s assistance.

But working together on the case, and sneaking around just to communicate, adds yet another layer to their working partnership, and their desire for each other.

Escape Rating B: Winter’s Heat is a short and sweet addition to the Nemesis, Unlimited series. The story is focused on Michael and Ada’s investigation, rather than on the workings of Nemesis in general. The two of them are undercover at a large country house, and do all the investigating together. They’re pretty cut off from any of the resources of the agency.

Complicating matters are both their prior relationship and that they are operating undercover as part of a group of temporary hires in service. The work rules don’t allow them to be caught fraternizing, so even a simple private conversation is fraught with tension. Their prior relationship only makes things more difficult; Ada wants to help with the case, but she isn’t sure that she can trust Michael, no matter how much she still might be attracted to him.

One of the great things about the way that their relationship evolves is that Michael lets Ada discover just how capable she is; he makes some vague attempts at protecting her, but gives those up relatively quickly. He needs her as a full-fledged partner, and lets her grow into her role. Even at the beginning, he explains that he is the agent in charge because he is more experienced, not because she isn’t capable. As she definitely proves herself to be.

Their relationship is one of significant romantic and sexual tension, strung out until they snap. They can’t be caught, and yet they can’t stop. It’s delicious.

One thought on “Review: Winter’s Heat by Zoe Archer”