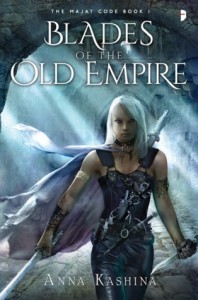 Kara is a mercenary – a Diamond warrior, the best of the best, part of the Majat Guild. When her tenure to Prince Kythar comes to an end, he wishes to retain her services, but must accompany her back to her Guild to negotiate her continued protection.

When they arrive they discover that the prince’s sworn enemy, the Kaddim, have already paid the Guild to engage her services – to capture and hand over the prince (who she has grown very fond of).

A warrior brought up to respect both duty and honour, what happens when her sworn duty proves dishonourable?

Blades of the Old Empire is the start of a damn fine epic fantasy series. It reminds me a bit of what has come before (more on that later) but it certainly hits the ground running.

Seeing a title like “Blades of the Old Empire” makes the reader think that old heroes, or possibly heroes of old or heroes like in the old tales, are going to come and rescue the empire. Or maybe the emperor. Throw that set of assumptions out the window.

In this case, those blades from that old empire are evil reincarnated warriors and their old empire was a horrifying tyranny. Everyone thinks that the remnants of those sorcerers are long dead, but as they good guys discover in this first book in the series, they are wrong. Dead wrong.

The Kaddim Brotherhood is back, and they are more evil than ever. Also much better at infiltrating the good guys’ strongholds and institutions.

The action splits between two centers in this story, Good King Evan and his heir, Kyth. (One of the great things about this series so far is that the king doesn’t have to die for his heir to come into his powers.)

King Evan is off to gain followers for his movement to strike down the laws against magic that would keep Kyth from inheriting the throne. Kyth goes on his own separate quest to gain followers among the Forest Dwellers, including their powerful foreseer and the powerful and ancient Lady of the Forest.

Evan gets captured, and Kyth spends most of the book on the run. But they both find themselves head to head with the evil Kaddim, as the forces of darkness begin to expose their long campaign to re-take the empire that once was theirs.

In the middle of all the plots and counterplots are the Majat, the assassins’ guild for which the series is named.

The Majat as a group are expensively mercenary, fearsomely well-trained, and supposed to be completely uninvolved with politics. The guild accepts any contract that pays. The Kaddim exploit that famous neutrality to grievous results.

They turn the only force capable of stopping them in upon itself, as the best assassins are forced into contracts against each other, supposedly in order to protect the reputation of the guild.

Instead, they begin to rebel, which only feeds into the plans of evil. Even as they figure out why they are sent, the manipulation of events continues at higher and higher levels.

Only Kyth is capable of resisting the evil magic. So the sorcerers use the Majat to compromise his heart instead. 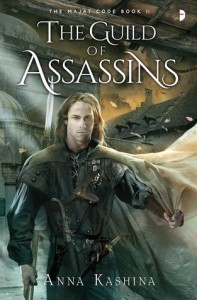 Escape Rating A-: True confession, I was supposed to read Blades of the Old Empire in time to do a joint review with E over at The Book Pushers, and couldn’t quite squeeze it in. Today, we’re reviewing the second book in The Majat Code, The Guild of Assassins, so I had to finish the first book first. And it was pretty damn awesome.

The story has a sense that readers have been dropped into the middle; some events are possible only because of things that have happened to the characters in a time before the story begins. It gave me the feeling that there must be another book before this one, but if there is, I can’t find it.

Still the story of Kyth’s first meeting with the Forest People would make an interesting story, based on the hints we get.

While this isn’t a quest story, it is definitely the tale of a young man and his friends coming into their powers and their adulthood. Kyth’s companions, Alder and Ellah, clearly have important parts to play in putting things right.

Something about Kyth and the way that his story is set up reminded me of Jim Butcher’s Codex Alera. Kyth made me think of Tavi, in the way that his magic is unknown and suppressed and coming out to save the situation.

That the church has suppressed magic and now has to reap the consequences had many echoes for me. In Katherine Kurtz’ Deryni series, and in Jean Johnson’s recent The Guild (reviewed at The Book Pushers). Attempting to remove all the magic users from the population as a means for the church keeping control was bound to have nasty results in the end. I think that point is going to get made over and over. (Insert your own possibly modern-day political parables here)

The manipulation of the assassins’ guild and simply the use of assassins as main characters also struck me as reminiscent of Amy Raby’s Assassin’s Gambit (reviewed here) and Lindsay Buroker’s Emperor’s Edge (first book reviewed here) series. Since these are all stories that I loved, from my perspective they are all excellent antecedents.

As Blades of the Old Empire concludes, the kingdom is still very much in crisis. There are both political and magical ramifications to every act. It also sets the stage for the main focus to switch from the royal party to the assassins Kara and Mai and their defiance of the corruption in the guild.

2 thoughts on “Review: Blades of the Old Empire by Anna Kashina”