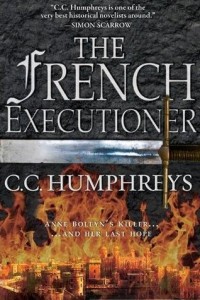 It is 1536 and the expert swordsman Jean Rombaud has been brought over from France by Henry VIII to behead his wife, Anne Boleyn. But on the eve of her execution Rombaud swears a vow to the ill-fated queen – to bury her six-fingered hand, symbol of her rumoured witchery, at a sacred crossroads. Yet in a Europe ravaged by religious war, the hand of this infamous Protestant icon is so powerful a relic that many will kill for it… From a battle between slave galleys to a Black Mass in a dungeon, through the hallucinations of St Anthony’s Fire to the fortress of an apocalyptic Messiah, Jean seeks to honour his vow.

If this were a contemporary novel, it would probably fall under the heading of “magical realism” but it isn’t so it doesn’t. Instead, it’s a historical novel in which magic happens, but it’s the kind of magic that is the result of the power of human belief; and in the mid-1500s, people did believe in magic and miracles.

Also in demons and black masses, but every silver lining has its cloud.

This is also not a book about Anne Boleyn, although her spirit certainly has a part to play in the events that occur. Instead, this is a historical action/adventure tour of Europe as the man who committed Anne’s execution chases her severed, six-fingered hand through battles, torture, slavery and even a pirate rescue in order to fulfill a vow. 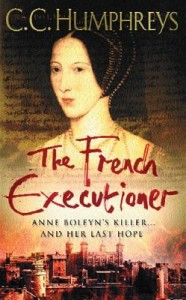 The original cover (at left) featured a portrait of Anne Boleyn. IMHO it’s a better cover than the new one, but confuses the issue about who the star of this show really is.

This is one of those stories where its the journey that makes it worth reading, the goal is only the means to place “the end” at the finale of the trip.

Jean Rombaud was the French executioner imported to England as one last favor to his about-to-be-late Queen Anne Boleyn. She asked for a swordsman because it was supposed to be quicker and therefore painless. (There are some fairly horrific stories of axe-beheadings that would make this a reasonable request under the circumstances, for certain values of reasonable)

The swordsman doing the job is what happened in history. Where this tale differs is that instead of the standard villainess or victim portrait of Anne, we follow swordsman Jean Rombaud as he tries to keep Anne’s famous hand for burial at a crossroads in their mutual Loire homeland.

He found Anne spiritual and somewhat saintly. He made her a vow, and he intends to keep it.

But he has an opposite number, a venal archbishop who plans to use the hand for the power he believes it holds either in alchemy or to summon Satan. Possibly both.

What follows is a repetition of chase-catch-release as first Jean has the hand, and then Archbishop Cibo steals it from him through superior force of arms, or just superior villainy. As they chase each other through Europe, Jean picks up a rag-tag band of followers who are after the Archbishop for compelling reasons of their own.

Jean and his comrades survive an episode of being galley slaves on a French ship, overtake a band of pirates by recruiting one of their number; pluck the hand out of the midst of a Black Mass and even help a young woman rescue her father from Cibo’s clutches. Of course, at the time that young woman is pretending to be a young man who can’t figure out that what she feels for Jean is more than friendship or hero-worship, while Jean can’t figure out why he’s suddenly developed an interest in young men, or at least one particular young man.

Their slowly developing love story was a bit of sweetness in the midst of tons of derring-do adventure, much of which nearly results in disaster.

Jean Rombaud has more lives than a cat. Following him as a uses them up in order to keep his vow makes for one rollicking adventure.

Escape Rating B+: This story takes a while to get started, but once it has you firmly in its six-fingered grip, it doesn’t let go.

The cast of characters that Jean either helps or opposes provides an introduction into what was best and worst of the mid-16th century. Jean himself is a mercenary; he plies his trade wherever he gets paid, and as often uses his sword in battle as on the headsman’s block. Along his career, he has encountered many men like himself, who live each day for the next battle.

He also doesn’t think of himself as a leader, and is astonished, and often exasperated, to find himself leading a band instead of just being one of the followers.

Two of the men who follow him are men he fought against on one particular battlefield. And so is the chief lieutenant for the Archbishop. All of them fought for pay, so it doesn’t matter that they were on opposite sides before, only their positions now.

One man is a Norse mercenary, the other is a former Janissary. They follow Jean because it gives them purpose. Beck follows Jean because she hunts the Archbishop. Disguised as a boy, Beck has been desperately trying to find her way into the Archbishop’s dungeons, because he is holding her father prisoner. She finds common cause with Jean because they hunt the same quarry, not because she believes in his quest.

Then there’s “The Fugger” who rescues Jean from a gibbet in return for his own redemption. He nearly doesn’t find it.

Read this one for the adventure. Jean and his crew so often end up in dire straits, only to be rescued by fortune, by providence, or by each other.

2 thoughts on “Review: The French Executioner by C. C. Humphreys”