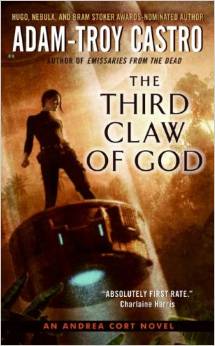 Andrea Cort became a “war criminal” at the age of eight when an unexplained darkness invaded her soul.

Now, decades later, the Devil is calling her.

Employed by the Diplomatic Corps but secretly aiding the AI masters of the universe, Counselor Andrea Cort despises the powerful Bettelhines—unrepentant death merchants who have prospered from the annihilation of civilizations. Now curiosity compels her to answer a cryptic summons to their home world, where the only law is Bettelhine law. But a murder attempt greets her arrival at Xana’s orbital entry port—and far graver peril awaits aboard the elevator transport meant to carry Andrea to the planet’s surface.

Trapped miles above Xana—surrounded by suspicious Bettelhines, their slavishly loyal retainers . . . and a corpse liquefied by a 15,000-year-old weapon—Andrea must unmask an assassin or die an equally hideous death. But the true reason for her summons—and sordid secrets weaving through her own dark past—threaten to destroy Andrea Cort more completely than the Claw of God.

Andrea’s life has drastically improved since Emissaries From the Dead. She is no longer alone in the universe, having found happiness (or as much happiness as can be expected from someone who has endured what Andrea has) with the Porrinyards. She now knows who was really responsible for the massacre that labeled her a war criminal at the ripe old age of eight. Last but not least, she “earned” an unprecedented promotion from her jailers/owners in the Diplomatic Corps and now has the first taste of freedom since her childhood.

Hans Bettelhine may have been an infamous merchant of death, whose munitions empire was even now fueling slaughter on a hundred human worlds, but I had to be fair: it was for precisely that reason that I wouldn’t blame him for today’s attempt on my life.

Still, there was no denying that his headquarters world, Xana, set an entirely new record for the shortest interval between my arrival at a place I’ve never been and the very first attempt on my life there.

Okay, maybe things aren’t going as well as they could be. Finding love, experiencing freedom, and hunting down the assholes who ruined her life are wonderful – but they don’t change the fact that Andrea Cort is and always will be a universally despised war criminal.

A fact that still bloody infuriates me. What the hell kind of fucked up government labels the 8 year old survivor of a community massacre a goddamn war criminal?! There was no war, so she could hardly be held responsible for violating the standard acceptable practices of wartime. She didn’t wield weapons of mass destruction, or commit atrocities. She just so happened to kill a man who was trying to kill her after seeing pretty much every single person she’d ever known or loved brutally slaughter one another. How the hell is this her fault? Why has she been subjected to a lifetime of assassination attempts, death threats, rape, torture, imprisonment, and hatred from hundreds of worlds? Why has one little girl been singled out for this kind of horrifying treatment?

That’s when he opened the trap door beneath my feet, left me realizing how much of my life had been based on a lie. “How come anybody even knows you’re a war criminal?”

“What,” he said, “you think you looked exactly the same at twenty that you did at eight? I mean, the Dip Corps could have changed your name, your skin pigment, your nose, maybe your hair color, and a couple of other cosmetic things about you, given you a new ID file and a false history, and nobody but your bosses would have known that you were the same kid.”

But he went on, every word out of his mouth a fresh spike driven into the base of my brain. “Instead, they put you to work as Andrea Cort, child war criminal grown up, and willingly ate all the seven hundred flavors of crap they had to swallow because of the propaganda weapon they had just handed all the alien governments who wanted to paint humanity as a bunch of homicidal bastards who let their own get away with murder.”

I closed my eyes, desperate to shut him out, hating the way his voice insisted on making itself heard through the pounding of my heart.

He asked, “Why would they put themselves through that?”

“Why would they put you through that?”

“And why would you let them?”

EXACTLY! Also, on a slightly related note, it’s a bit disturbing to me that Andrea had to visit an actual war monger’s private planet to get that kind of insight.

In The Third Claw of God, Andrea is invited to a war profiteer’s planet for mysterious reasons, promptly survives an assassination attempt, but is then called upon to investigate another murder. Whereupon she realizes nothing is as it appears when dealing with Space-Faring Stark Industries. A simple murder is only the beginning, and by the end Andrea is going to discover the answer to secrets she didn’t even know existed.

The second installment in the series is even better than the first. It opens with an assassination attempt and does not slow down until the last page. Warning: you will be up till 3am reading this book in one sitting.

Once again, it is difficult to discuss the story in too much detail without spoilers, but suffice to say that Adam Troy Castro’s skills with characterization and world-building continue to amaze…..and disturb. Particularly when he keeps peeling back the layers of society on the Bettlehines’ private planet. You think life on a war monger’s private planet is bad? Just wait until you learn about the employee loyalty program and various perks available to members of the ruling family. Andrea’s treatment by the Diplomatic Corps will seem almost benevolent in comparison.

Escape Rating: A- because Adam Troy Castro’s publisher has refused to continue backing Andrea Cort. They believe there is more money in YA, and so we will never reach a satisfying conclusion to Andrea’s story. INCONCEIVABLE! I burned through The Third Claw of God the night after finishing Emissaries For the Dead, and am left hanging, desperately pleading for another installment.

3 thoughts on “Review: Third Claw of God by Adam-Troy Castro”