I’m a fan of short stories, particularly fantasy, science fiction, and broadly, speculative fiction. Although many of the print science fiction and fantasy magazines have had struggles in recent years, there’s been an explosion of online publication featuring speculative short stories. Some of the usual suspects include Tor.com, Clarksworld, and Strange Horizons, but for this post I’d like to feature a Nigerian online magazine I’ve run across via a post on Metafilter. 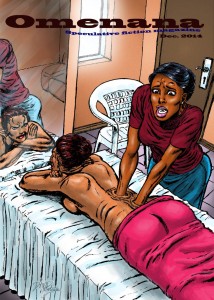 It’s called Omenana, and its first issue was published this month. From the that issue’s editorial:

Science fiction is still very new in Nigeria, but while we could barely find 10 people to contribute to the anthology in 2010, there are now hundreds of writers who will readily try their hand at the genre. Just as I did, more writers are recognising that we have a copious amount of material for speculative fiction here in Nigeria. That means we need platforms where these stories can be anchored. To help this along, Chinelo Onwualu and I present Omenana, a bimonthly speculative fiction e-publication.

And from Chinelo Onwualu’s essay in that issue, The Unbearable Solitude of Being an African Fan Girl:

Being an African fan girl is a strange, liminal thing. You’re never quite sure that you exist, you see. A part of you is rooted in your culture and its expectations for how a woman ought to behave – church, family, school – but another is flying off into the stars carrying a samurai sword and a machete. Not one thing or another, you’re both at the same time.

You know you are not alone. There are thousands of women just like you all over the continent. They have fought to forge their unique identities outside of the prescribed roles they were expected to fill. They have kept that childhood sense of wonder and aren’t ashamed to squeal like schoolgirls when they get excited. They run when they are in a hurry and they take the stairs two at a time. Like you, they are still curious and aren’t afraid to ask questions, but they scattered like magic beans across a vast farm. They are growing into their own twisted shapes and no one around them can understand why.

A standout story in the first issue is HostBods by Tendai Huchu. It is set in a time when mind transference technology is possible — and indeed so commonplace that it is possible to rent the use of another person’s body for a period of time. However, being a “HostBod” is a risky and usually short-lived career, and the people who do it tend to be treated as if they had all of the value of purely artificial robots — in other words, they’re disposable. Ordinarily, a HostBod isn’t supposed to be aware of what goes on when another person uses them, but for the protagonist… things are a little different.

Another story, Winter in Lagos by Saratu Abiola, takes a simple premise — Lagos experiencing its first snowfall — and uses it to turn a mirror onto contemporary issues in Nigeria.

Other features in the first issue are an interview with Ibrahim Ganiyu and art by Kelsey Arrington.

I look forward to Omenana’s next issue.

One thought on “Omenana: speculative fiction from Africa and the African diaspora”