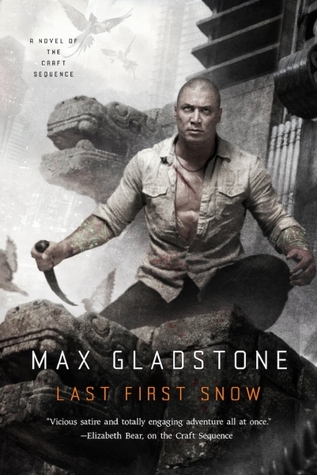 Forty years after the God Wars, Dresediel Lex bears the scars of liberation—especially in the Skittersill, a poor district still bound by the fallen gods’ decaying edicts. As long as the gods’ wards last, they strangle development; when they fail, demons will be loosed upon the city. The King in Red hires Elayne Kevarian of the Craft firm Kelethres, Albrecht, and Ao to fix the wards, but the Skittersill’s people have their own ideas. A protest rises against Elayne’s work, led by Temoc, a warrior-priest turned community organizer who wants to build a peaceful future for his city, his wife, and his young son.

As Elayne drags Temoc and the King in Red to the bargaining table, old wounds reopen, old gods stir in their graves, civil blood breaks to new mutiny, and profiteers circle in the desert sky. Elayne and Temoc must fight conspiracy, dark magic, and their own demons to save the peace—or failing that, to save as many people as they can.

It was also the first and last time that Craftswoman Elayne Kevarian met Temoc, the last Eagle Knight of the Old Gods.

While 40 years is enough time for Elayne and Temoc to have both lost their naivete and idealism, it is not enough time for a powerful skeleton to forget all the wrongs that were done him during the Wars – even though he won.

Last First Snow starts out as a tale of modern urban renewal (or urban removal, depending upon perspective). The Powers That Be in Dresediel Lex, meaning the King in Red and the insurance companies represented by Tan Batac, want to remake the Skittersill slum into a modern suburb of palaces and high-end shopping. Which will, of course, force out the blue-collar dockworkers who have called the Skittersill their home for the last 40 years.

Elayne is a Craftswoman. In terms of the Craft Sequence, that makes her a combination of lawyer and necromancer, and she is very good at her job. The Skittersill is a depressed area because the Old Gods that Kopil defeated left wards that keep it economically depressed. Those wards also keep out demons and suppress fires, but they are fraying now that the Old Gods have been defeated.

Development requires new wards. It also requires that the working-class poor who have made the Skittersill their home shove off for less desirable pastures. However, they don’t want to leave their homes or their community, and who can blame them? They are all well aware that all this glorious proposed development is not for their benefit. It never is.

Elayne steps in to broker a “peace agreement” between the two sides, something that she can present to the redistricting judge. It is only when she arrives at the Skittersill that she discovers that the community is being led by her old frenenemy, Temoc. In the God Wars, she once saved his life.

And he once earned the ire of the King in Red. Neither of those events slips into the background when the “peace conference” erupts in violence. A lone assassin has brought the God Wars back again with a vengeance. As the district slips further into violence, and back into the old ways that Kopil and Elayne once defeated, it feels as if there is nothing she can do except watch the body count rise.

Until Elayne follows the money and discovers just who benefits from the destruction. And decides to make sure that they don’t. No matter the cost.

Escape Rating A: The Craft Sequence is an urban fantasy series that is guaranteed to leave readers with a terrible book hangover. Each volume immerses you further into this world, and makes it that much more difficult to let go.

Last First Snow is no exception. But readers will be rewarded by starting with the first book in the series, Three Parts Dead (reviewed here). Each book builds on the layers of world creation erected by its predecessor, and the result is utterly compelling.

We have sayings about gods, “Those whom the gods would destroy, they first make mad,” is one that will come to mind during the reading of Last First Snow. Sometimes the question is whether Kopil has lost it, or whether Temoc has been clinging to the worship of his Old Gods for far too long.

But the phrase that I want to apply to Kopil, the King in Red, is the one about power corrupting and absolute power corrupting absolutely. Because while Kopil and Elayne won the war to abolish the Old Gods of Dresediel Lex and their blood sacrifices and replace their worship with technology and self-determination, the King in Red is now himself an absolute power. When the situation in the Skittersill goes pear-shaped, Kopil uses it as an excuse to get out all of his war toys and use all of his power and obliterate the people who have defied him.

He doesn’t care about the cost, not to the district and not to his own troops, because he has lost his ability to empathize with people. He isn’t really people any longer.

One of the questions in this reader’s mind is whether Kopil has become an even greater tyrant than the Old Gods he fought so hard to defeat. Elayne Kevarian, who has been his ally all this time, begins to work against him, telling herself that it is in his long-term best interests. Whether it is or not is something we will have to judge in later books.

Last First Snow works on multiple levels. In its base, it is a story about urban renewal. We’ve seen this story play out in real life; the powers that be sell the plan on the grounds of how it will help the residents of some area that middle class people see as blighted. All of the benefits to area residents are touted until the deal is closed. And then, the poor or working class folks who lived in the area are forced out by construction and rising prices and the rich get richer. Everyone in the Skittersill knows exactly what will happen. They can’t stop progress, but they can work towards getting themselves a halfway decent deal as part of it.

There are too many forces arrayed against them. Too many people who are trying to make sure the deal fails, no matter what underhanded methods are used. Even Elayne knows it is too easy, but she doesn’t find the flaw until it is too late for everything but counting the bodies. We’ve all guessed. Even she’s guessed. But as a Craftswoman, for the legal parts of that training, she needs proof she can take before a judge.

We also see how far Kopil has stepped away from being human. He’s still holding on to the grudges, but none of the feeling. He wants to suppress the Skittersill rebellion because Temoc is on the other side of it. Kopil is still fighting old battles and old wars. It’s possible that he can’t feel the reality of any new ones.

I’m still thinking about Last First Snow. Every angle on the story inspires more and more possible tangents in my brain. Plus the manipulators of events are clearly not done. Peace is definitely only temporary.

If you like urban fantasy that makes you think (and think, and rethink) you will love Max Gladstone’s Craft Sequence.

One thought on “Review: Last First Snow by Max Gladstone”