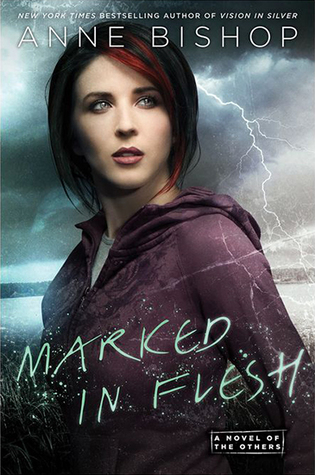 For centuries, the Others and humans have lived side by side in uneasy peace. But when humankind oversteps its bounds, the Others will have to decide how much humanity they’re willing to tolerate—both within themselves and within their community...
Since the Others allied themselves with the cassandra sangue, the fragile yet powerful human blood prophets who were being exploited by their own kind, the delicate dynamic between humans and Others changed. Some, like Simon Wolfgard, wolf shifter and leader of the Lakeside Courtyard, and blood prophet Meg Corbyn, see the new, closer companionship as beneficial—both personally and practically.
But not everyone is convinced. A group of radical humans is seeking to usurp land through a series of violent attacks on the Others. What they don’t realize is that there are older and more dangerous forces than shifters and vampires protecting the land that belongs to the Others—and those forces are willing to do whatever is necessary to protect what is theirs…

Marlene: Before we get to the snark portion of our review, Cass is letting me set the stage.

I got hooked on Bishop’s The Others series just a few short weeks ago, when I decided I really needed to read at least the first book of this thing before I wrote up which other authors are “read-alikes” for Bishop for an assignment from Novelist. I got hooked so hard on this series (sort of like the cassandra sangue are addicted to cutting) that I read through the rest really fast. Now I’m with everyone else, panting for book 5. 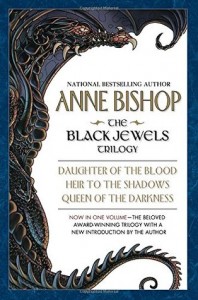 I will say that after having read her Black Jewels series many years ago, and now this one, that the author does some very interesting things at that knife-edge where pain and pleasure meet. Neither series is for the faint of heart, but The Others doesn’t go quite as far, or at any rate quite as universally, down the pain and torture path as The Black Jewels.

Cass: I wouldn’t say The Others are any less disturbing than the Black Jewels. Remember the previous books where they were slowing feeding completely conscious and aware living girls into a meat grinder, then distributing it as ground beef?

Marlene: I think the thing that is different is that the whole society in The Black Jewels felt more universally screwed up than it does at the beginning of The Others. There are very, very sick and evil people in The Others, but the society as a whole doesn’t seem run that way, at least not until Humans First and Last starts propagating “the Big Lie” all over the place. And all resemblances between Humans First and Last and the Nazi and neo-Nazi movements feel definitely intentional. They certainly are on the part of this reviewer.

Also, we mostly see the world of The Others from the perspective of people, for looser definitions of the word people, who condemn that practice and want to live mostly in harmony. People who condemn that scene you describe. In The Black Jewels, that kind of thing WAS the prevalent political system.

But it is certainly a matter of degree.

Cass: I first read this a couple months ago – before Trump was a legitimate front-runner for presidency. At the time, I was very irritated with how bloody stupid the majority of the humans were acting. Easily led around the nose by the HFL movement, no matter how blatantly obvious it was that their actions were suicidal. (Were none of you present for events in the last book?!) Now it’s all terribly prophetic.

Nonetheless, I can not get over what I believe is the prevalent message of this series:

Just to recap, the blood prophets, like Meg, cut themselves to reveal prophecy. If they cut themselves alone and/or do not speak, they feel nothing but horrible pain and are in constant danger of going mad. But when they cut themselves with another person around and share the prophecy? EPIC ORGASM. Cassandra sangue who are born in the wild start “cutting” during puberty, hide it from their parents, and then drive themselves to insanity because they just can’t stop! It’s about as subtle as Victorian-era gynecological care. (Note: I work with cutters on a day-to-day basis. There is no real dialogue with the psychology, or the physiological ramifications of actual cutting. As portrayed, the cassandra sangue could just as easily obtain prophecies from vomiting or urinating or sneezing with no appreciable impact on the plot of the series.)

A running subplot throughout this book is Meg trying to address her addiction to touching herself – I mean – cutting. Proposed solution? SEX. The idea being that when Meg is feeling a nonspecific itch….I believe at one point she determines she needs to cut once a week….she can scratch it with Simon.

As much as I do enjoy the world-building, the Elders, and The Adventures of Hope Wolfsong, I cannot get past all the anti-masturbation subtext.

Marlene: I’ll admit, that the budding romance in this series would feel completely unnecessary, were it not for this particular subplot. Meg doesn’t need to fall in love, but she needs to find a substitute for the intense euphoria she gets from cutting. I wish that link weren’t there. It may be necessary for the story that the cassandra sangue be addicted to cutting, but that addiction did not need to be so overtly sexual.

Back to where I was originally heading. It’s not that the growing relationship between Simon and Meg isn’t absolutely adorkable, because it is. I just wish that it hadn’t been all wrapped up in Meg’s need to find an alternate form of euphoria. In this scenario, Simon’s prick is equivalent to her razor, and she’s in danger of developing an alternate addiction, to Simon instead of cutting. And doesn’t that have a whole ‘nother bunch of ways it can go horribly wrong?

Cass: Yeah. Super healthy relationship developing there. Just can’t wait. Remember, Meg is supposedly the Trailblazer for all the other prophets. Does that mean that The Blood Prophet’s Guide she’s working on will have a chapter titled: SEX SAVES?

The Others are pretty intense about making sure their prophets are safe. I’m afraid that protective drive could go somewhere very dark, very quickly. At least the Meg/Simon thing has been slowly building over several books. (Though it is still ridiculously unnecessary) Are they going to do something horrific to my amazing Hope Wolfsong?! In case it is not obvious, I am Team Hope. I loved all the Hope chapters. More Hope.

Marlene: One of the good things about this entry in the series is the way that it kept expanding our view of this world. There be worldbuilding here, and that’s something I always love in my fantasy, urban or otherwise.

Hope’s story is hopeful, in more ways than one. And in spite of the horrific visions that she sees. Hope is young enough to still be seen as a child. So instead of what feels like the over-protectiveness directed at the adult Meg, in Hope’s case, she is being adopted. Jackson Wolfgard and his mate are charged with taking care of her, and they see her as another cub they are raising, admittedly a cub who doesn’t turn furry. But she is getting a chance to grow up in a slightly more normal environment. She’s also young enough to adapt to other methods of prophecy. Hope loves to draw, and is able to draw her visions. Where the Controller threatened to cut off her hands if she didn’t stop drawing, Jackson gives her all the art supplies she needs. And her drawings are life-saving, both for her and for the people and terra indigene she is able to warn. She still cuts, but not nearly as often.

Cass: Though I loved all the interludes with Hope, and getting a glimpse of The Elders…..I have to say I was disappointed with Marked in Flesh as a whole. It felt like a filler episode. As though the author knows where she plans to end the series, but has to fill a couple hundred extra pages along the way. With one exception, Marked in Flesh basically ended in the exact same spot it started: Humans in Thaisia losing all their rights because of the HFL.

At one point, a character even lampshades just how repetitive the plot is. I feel you Doc.

“Because everyone in Lakeside will be at risk,” Lorenzo said. “Same song, different day.”

Marlene: Or, to quote Battlestar Galactica:

“This has all happened before. It will all happen again.” 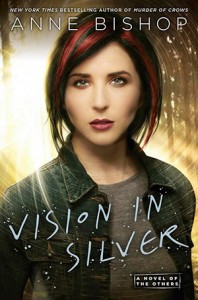 Marked in Flesh feels like a continuation of the previous book, and in a way that finally sets up the conclusion. Or what I presume is the conclusion in the untitled book 5 of the series. Vision in Silver (reviewed here) is the gathering storm, especially from the human side. Throughout that book, the HFL is going further and further off the deep end, while The Others are trying to figure out what to do. Or how far to go in what they do.

In Marked in Flesh, the HFL attacks reach their crescendo, and we get The Others response. All the feces hit all the oscillating devices, and the fallout sprays pretty much everywhere. The consequences of those events will be in the next book, both in the sense of what will the remaining humans do, and in the sense of what happens to the Elders of the Others who have taken on human characteristics, and generally the worst of those, in order to retaliate.

One of the other subplots in this particular entry in the series felt like a prepper’s dream. Simon and the folks in Lakeside, both human and Other, are preparing for an “end of the world as we know it” scenario, which comes to fruition at the end of the book. This particular subplot reminded me a whole lot of Grantville in Eric Flint’s 1632, Stirling’s Island in the Sea of Time, and his Dies the Fire. What does everyone do, what do they absolutely need to preserve, when all the technology they have come to enjoy if not depend on, fades away?

It circles back to the question that the Elders ask Simon at the end of Vision in Silver, “how much human should we keep?” and its unspoken corollary, “how many humans should we keep?” The answers are going to be interesting, to say the least.

Cass: In the end, I don’t believe Marked in Flesh is an essential entry of The Others. You could learn all you need to know from the one line found on pg. 374. Feel free to skip this one and wait for book 5 to be released.

Marlene: While it may not be an essential entry in the series, I still found Marked in Flesh to be compulsively readable and eminently distracting. I got totally sucked in and read the book in a single evening. While there are plenty of uncomfortable overtones to Meg’s relationship with Simon, I very much liked all the other relationship building in the book, all the developing friendships and alliances.

So I give Marked in Flesh a B+ for its ability to keep me completely absorbed.

3 thoughts on “Joint Review: Marked in Flesh by Anne Bishop”