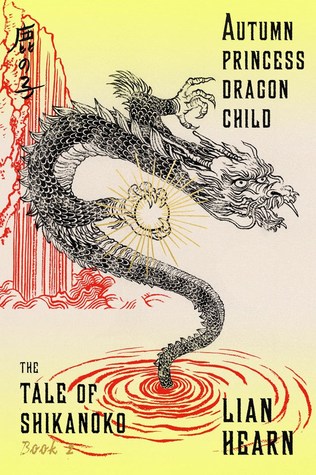 Shikanoko has been humbled by failure, and his once clear destiny has become clouded . . .

The Autumn Princess and the boy who is the true emperor are fugitives in the forest, alone and unprotected . . .

In the mountain sorcerer’s hut a new generation of the Old People is born―the Spider Tribe, not quite human, not quite demons, and quickly coming of age . . .

One clan is in retreat, the other holds the capital, and natural disasters follow one upon another. Will Heaven ever be placated?

In Autumn Princess, Dragon Child, the old order has come unsettled and the weave of destiny has become unpredictable as it is pulled tighter, sharper, faster, by the instincts for vengeance and redemption, loyalty and survival. The battle for the Lotus Throne has begun in earnest.
In this medieval Japan of Lian Hearn’s peerless imagination―so full of magic, beauty, violence, love, and sorrow―the only thing truly inevitable is that these forces are building to a brutal climax, though who the players will be and what the stakes will be cannot yet be told.

The Tale of Shikanoko is a myth that was never written, from a past and a country that never quite was.

And it is an epic tale, but one that is perhaps better read in one long delicious gasp, rather than being forced to wait as each part of the tale is released. Or perhaps that should be “revealed”.

She said, wishing that she could find the time to read it all right now, instead of being forced to ration her reading time, knowing that the temptation to reach the end of this glorious tale will become much too strong to resist.

I’m waxing a bit lyrical because this series just breathes that sort of atmosphere. It’s not so much a story that one reads as a world that one falls into, and doesn’t want to leave.

Autumn Princess, Dragon Child is the second part of the Tale of Shikanoko. And it feels like one single tale, broken up into smaller chunks for the sake of publication expediency rather than because the story really breaks into four parts.

Or I could be saying that because I want the excuses to read it all now. 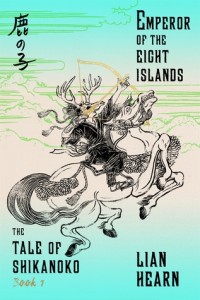 The first part of the tale, Emperor of the Eight Islands, set the stage. We meet not only Shikanoko, the story’s prime mover and shaker (more often the prime person being moved and shook), but also all of the other characters on the stage. And the civil war between rival factions, the Miboshi and the Kuromori, and their fight to hold the throne.

There is magic here, both the active kind practiced by the mostly evil Prince Abbot and the mostly good Sesshin, and the kind of ambient magic that underpins the world, where the spirits are protesting that the rightful Emperor has been thrown into exile and has lost his throne.

That the rightful emperor is also a child hiding as a monkey boy just adds to the magic and the misdirection. Even more so that the only person who knows where he is will not survive to see him reach his rightful place.

If he ever does. 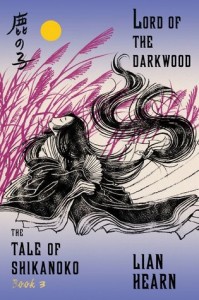 Escape Rating A-: Autumn Princess, Dragon Child does not stand alone. It is not just necessary, but absolutely crucial to read Emperor of the Eight Islands first, as Autumn Princess definitely starts in the middle of things. And those are things which are certainly not finished by its end. For that, we need to wait for Lord of the Darkwood and The Tengu’s Game of Go later this year.

In Emperor of the Eight Islands, Shikanoko was a reactive figure. Things happened to him (lots of things happened TO him) and he reacts and then deals with the aftermath. He does not control events, instead they control him.

In Autumn Princess, Shikanoko begins, just very barely, to master the power swirling around inside him. He is able to act, at least some of the time, and not merely react. But much is still outside of his control.

The fate of the Autumn Princess herself is one of those things that is very much outside of his control. Her fate seems both pre-ordained, and something that could have gone much, much better if Shikanoko had had more control of himself from the very beginning. But if he had, there wouldn’t be much of a story.

A lot of the action in Autumn Princess revolves around betrayals. One of the threads of story from the very beginning involved a betrayal of a son by his father, and a wife by her husband. Their actions have continued to add one falsity upon another, as each of them has turned against every other person who has entered their lives, in their fruitless quest to set aside that first betrayal.

Shikanoko’s uncle betrayed both Shikanoko and his father. The Prince Abbot and his cousin betrayed the rightful emperor. The false emperor, in his turn, was betrayed by a trusted friend. The circle of wrongness continues to ripple outward.

Ultimately, Autumn Princess, Dragon Child has the feel of a middle book, which it is. There is no upward trajectory. Instead, the situation gets worse and worse as the story continues. The only character who may possibly be happy with their current situation is the hidden child emperor, who is having more fun, and a much more fulfilling life, as a performing monkey boy than he ever had as the cossetted and smothered imperial heir.

How his tale will turn back towards Shikanoko’s ongoing tragedy remains to be seen. But based on the first half, it’s going to be awesome.