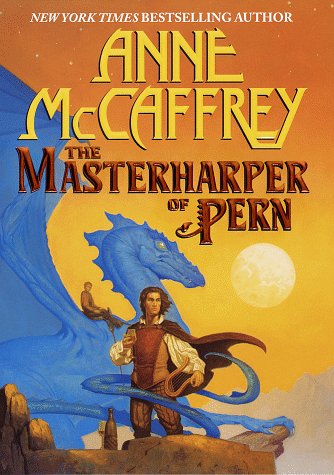 In a time when the deadly scourge Thread has not fallen on Pern for centuries--and many dare to hope that Thread will never fall again--a boy is born to Harper Hall. A musical prodigy who has the ability to speak with the dragons, he is called Robinton, and he is destined to be one of the most famous and beloved leaders Pern has ever known.

It is a perilous time for the harpers who sing of Thread--they are being turned away from holds, derided, attacked, even beaten. In this climate of unrest, Robinton will come into his own. But despite the tragedies that beset his own life, he continues to believe in music and in the dragons, and he is determined to save his beloved Pern from itself--so that the dragonriders can be ready to fly against the dreaded Thread when at last it returns . . . . 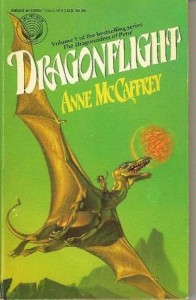 Most any Pern fan will tell you that the best way to read the series is in publication order, and I would mostly agree with that. By 1998, Pern was a richly-populated world, with loads of great stories told–and plenty more to tell. One of the most interesting characters in the series is Robinton, who at the beginning of the Ninth Pass of the Red Star is the MasterHarper. In the very first Pern novel, Dragonflight, we get to meet this fascinating, talented man, and the first six books of the series feature him heavily. He’s shown as an older man, late middle-aged, exceedingly gregarious, with a taste for fine white wines and a glib tongue for diplomacy, but we’re told nothing whatever of his backstory.

In The MasterHarper of Pern, McCaffrey corrects this glaring gap, and she takes us back to the very beginning, to his birth to the MasterSinger Merelan and MasterComposer Petiron. Growing up in the Harper Hall is difficult, especially with his father being so inattentive and difficult to get along with, but Robinton excels at every part of the musical tradition, and is composing tunes of his own at three Turns of age. This, of course, annoys Petiron when he finds out, when the boy is almost 10, and we have a clash of parenting that feels almost modern, that lasts for years, ending only with Merelan’s death. Even then, Petiron is difficult, and the battle comes to a head when Robinton is elected MasterHarper.

But Robinton has other things to worry about. In the High Reaches, where he had served on his first journeyman assignment, a young bully named Fax is taking over more and more territory, and gradually building himself an empire, going against every custom, and against the Charter. The other Lords Holder won’t confirm him as a Holder, but are powerless to stop him. Robinton must watch, and do what he can, as he protects his Harpers and the common folk as best he can.

The Weyrs are of mixed mind, as many of the Lords Holder are, whether Thread will ever return to Pern. Without Thread, the great dragons that protect the planet are no longer needed. But if it returns, so few dragons remain, that they may not be able to protect all of Pern! Robinton’s lifelong friendship with F’lon and his sons F’lar and F’nor are part of the puzzle–they believe Thread will return, and Robinton’s association with them harms his reputation with those who disagree.

Action, drama, romance, political intrigue: this epic has it all, just like our own lives do over that much time.

Escape Rating: A-. The great strength of this book, in my opinion, is that it ties together a great many loose threads from a whole bunch of other books. For instance, why did Petiron (yes, the same one) not communicate better with the MasterHarper in Dragonsong? And the mentally-disabled Camo, who appears in that book as a drudge at the Harper Hall–what’s his story? The headwoman Silvina seems exceptionally tolerant and caring of him, but why? These things, and so many more, are gathered up into a nice neat package for us, and we can begin to see how some of the stray stories fit together. When we meet F’lon, he’s not yet Impressed his dragon, and is called Fallonner; astute Pern fans will figure out the honorific contraction many chapters before Robinton hears the drum message that his friend has Impressed, but it’s a fascinating peek into life before the events of Dragonflight and the tale of his two sons.

Where The MasterHarper of Pern falls slightly short for me is that we’re telling an epic tale almost as a series of connected short stories or novellas.  One chapter actually starts with “While the MasterHarper waited over the next five Turns,” and these skips clearly hop over things that could be interesting. It’s a bit of a quibble, really, because it does set us up for the timetable in the other books, but as a big fan of the character, it wouldn’t have bothered me a bit to make this epic even moreso, by filling in some of those gaps. McCaffrey liked this length of book, it seemed–all three of the original trilogy, and many of the subsequent novels, were about as long as MasterHarper, and she never really stretched out into “epic fantasy,” like any number of Marion Zimmer Bradley’s Darkover books, or Jacqueline Carey’s grand epics of Terre D’Ange (otherwise known as the Kushiel series). She could have, I’m reasonably certain, and sold just as many books, so I’m unsure why she didn’t.

With the caveat that my only complaint about this book is that it’s not long enough, I can heartily recommend this book. Pern fans will see so many loose ends tied up for them, and even if you’ve not read all the other stories in the series, you’ll find a great tale of a fascinating person!

4 thoughts on “Guest Review: The MasterHarper of Pern by Anne McCaffrey”