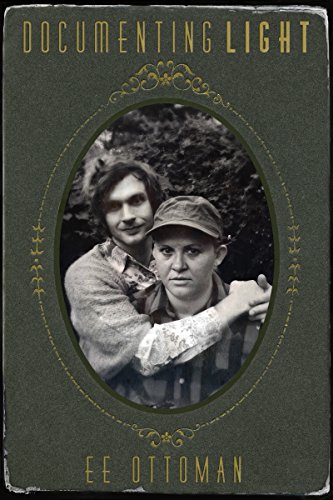 If you look for yourself in the past and see nothing, how do you know who you are? How do you know that you are supposed to be here?

When Wyatt brings an unidentified photograph to the local historical society, he hopes staff historian Grayson will tell him more about the people in the picture. The subjects in the mysterious photograph sit side by side, their hands close but not touching. One is dark, the other fair. Both wear men’s suits.

Were they friends? Lovers? Business partners? Curiosity drives Grayson and Wyatt to dig deep for information, and the more they learn, the more they begin to wonder — about the photograph, and about themselves.

Wyatt is moving his mother into an apartment, as her Alzheimer’s has made it difficult for her to continue running the family farm. While putting some of her things in the attic, he finds an old photograph of two men, and it makes him curious…

Grayson works at the local county historical society, and enjoys the puzzle Wyatt has brought to him. In researching the photograph, the two people learn more about each other–and themselves–than they bargained for.

When Marlene gave me this book for my attention, I was immediately interested; as a transgender woman myself, I can attest that well-crafted stories with transgender characters are a bit scarce. So as I started reading, I was unsurprised to see which of our characters is a transman–Grayson, with his dapper suit and bowtie, fits the bill quite nicely. Wyatt…now, here’s where it gets tricky, so stick with me a moment. For the first part of the book, Wyatt is referred to as “he”, but they’re hiding something from their family and friends–they’re transgender, too, a feminine-expressing genderqueer person who prefers they/them pronouns. Once this is revealed, Ottoman uniformly refers to Wyatt using those pronouns, and their gender identity is not ever at issue after that.

The two people go on a date, after finding out some significant facts about the photograph. The first date doesn’t go well, as both are somewhat afraid of being out with their partner, and have had bad experiences. There’s some internal back-and-forth, and they give it another shot…and what follows is, in this reviewer’s eyes, a truly, truly beautiful thing. The growing relationship between Wyatt and Grayson proceeds very naturally, with the only hiccup being that Wyatt’s family still thinks of him as a gay man, and Grayson’s family is mostly not talking to him at all.  Ottoman, who is themself a student of history as well as an accomplished author, speaks to us through Grayson about the erasure of non-heterosexual, non-gender-binary people in history–how, so often, we must see solid evidence before we can accept anything but the default cisgendered, heterosexual identity.

Grayson is speaking of the study of history, particularly through photographs and other non-textual evidence, but it raises the question, for me, if the same could be said for literary works. In my previous read, The Heart Of Aces, one of the short stories, “Out of the Dead Land,” alludes to this, as one of the characters asserts in an academic paper that a character from a classic film is asexual. Allowing for non-default gender identities and sexualities, when it is not directly referenced in the story, allows for a much broader interpretation of characters and stories. It’s truly complicated, but it’s something I’m going to think about in my own reading moving forward.

Escape Rating: A+:  I could gush on and on and on about this story, seriously. Ottoman has given us two protagonists who are very “real;” we’re firmly entrenched in their heads, and can see the world through their eyes. The internal cringe and stress that Grayson feels when he is misgendered by his boss is almost palpable, as is Wyatt’s discomfort at their mother’s deteriorating mental state, and the fact that their family does not know about their being genderqueer.  Scenery and problems are detailed enough so that we know what the problem-to-overcome is about, without burdening the point needlessly. We know, very quickly, what our character’s stressors are, and the puzzle of the photograph keeps us interested, as a common thread that binds the discoveries together.

One of the high-water marks for me in this tale is when, on a road trip out of town, our newfound friends end up sharing a motel room. They did it for purely pragmatic reasons–neither of them has much money, really, another factor that plays heavily into the path this story takes–so it only makes sense. But the romantic tension has been building for a while, and what happens, happens. It’s a little bit of a predictable moment, but I shan’t complain, and here’s why:

I’ve found that, way too often, scenes depicting queer sexualities come off as…well, smutty, and othering, like it’s something really titillating that they’re different. This is off-putting to me in a lot of ways, as it’s quite inconsistent with my own experiences as a transwoman. Grayson cannot afford surgery–we’re not told if he’s even on hormones yet!–and early in the book grouses to himself about his D-cup breasts being hard to hide. Knowing my own dysphoric experiences during that time in my transition, I can grasp a bit what he is going through. Wyatt, for their part, seems happy enough in their skin; the disconnect for them is that they express as feminine, and aren’t out to much of anyone except Grayson.

Sex, for people who are not conforming to gender binaries, is a tricky business; there are all kinds of possibilities for hangups and traumas and things that just don’t feel good. But our two lovers do what has to be done to make it work–they communicate. The communication, while brief, tells them–and us–what will and won’t work, and expresses enthusiastic consent. The two scenes in this book that are shown are explicit, but not at all smutty. Quite the contrary: you have two beautiful, complicated people loving each other, and enjoying it.

By the end of the book, it’s obvious that Grayson and Wyatt are loving each other both in and out of bed. There are problems yet to overcome, but they’ve committed to dealing with them together. And that, my friend, is what romance is all about, to this reviewer.  I give this book the strongest possible recommendation.