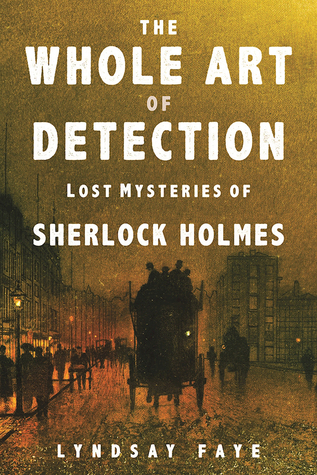 Internationally bestselling author Lyndsay Faye was introduced to the Sherlock Holmes mysteries when she was ten years old and her dad suggested she read Sir Arthur Conan Doyle’s short story “The Adventure of the Speckled Band.” She immediately became enamored with tales of Holmes and his esteemed biographer Dr. John Watson, and later, began spinning these quintessential characters into her own works of fiction—from her acclaimed debut novel, Dust and Shadow, which pitted the famous detective against Jack the Ripper, to a series of short stories for the Strand Magazine, whose predecessor published the very first Sherlock Holmes short story in 1891.
Faye’s best Holmes tales, including two new works, are brought together in The Whole Art of Detection, a stunning collection that spans Holmes’s career, from self-taught young upstart to publicly lauded detective, both before and after his faked death over a Swiss waterfall in 1894. In “The Lowther Park Mystery,” the unsociable Holmes is forced to attend a garden party at the request of his politician brother and improvises a bit of theater to foil a conspiracy against the government. “The Adventure of the Thames Tunnel” brings Holmes’s attention to the baffling murder of a jewel thief in the middle of an underground railway passage. With Holmes and Watson encountering all manner of ungrateful relatives, phony psychologists, wronged wives, plaid-garbed villains, and even a peculiar species of deadly red leech, The Whole Art of Detection is a must-read for Sherlockians and any fan of historical crime fiction with a modern sensibility.

I have an often-confessed penchant for Sherlock Holmes pastiches. As a consequence, I’ve read a lot of them. Some take the Holmes canon into entirely different directions, like Laurie R. King’s Holmes/Russell series, A Study in Scarlet Women by Sherry Thomas, or Stephanie Osborn’s Displaced Detective series. Others serve to either extend the existing canon or act as homages to it, attempting to recreate the style and the period of Conan Doyle’s original work, using his immortal characters and merely telling us new stories in the same spirit. 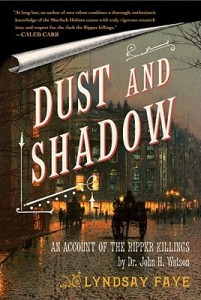 One of the best of the latter type that I have read was Lyndsay Faye’s Dust and Shadow. In that story, she relates the investigation of the Jack the Ripper case as conducted by Sherlock Holmes and documented by his faithful friend, Dr. John Watson. If you have any interest either in Sherlock Holmes, Jack the Ripper, or late Victorian-set historical fiction, this book is a winner on all fronts.

And it feels as if we are back there again. These stories feel like the familiar Holmes. They read as though they are part of the whole, merely a part that has been hidden until now. It is marvelous to immerse oneself back in that time and place, and with these two singular characters.

As much as I enjoyed the whole book, the stories that I loved the most were the two that were not told as stories, but as diary entries. It is clear within the stories that Watson is writing for his audience in The Strand Magazine, but in An Empty House we get to read a bit of Watson’s personal diary during March and April of 1894. At that time, Watson was recovering from the recent death of his wife Mary, and still dealing with the death of his friend Sherlock Holmes at Reichenbach Falls three years earlier. Watson’s method of dealing with Holmes’ death was to continue writing up their previous cases, as he is still doing within the pages of his diary. As a method for handling the stages of grief, neither the reader nor Watson himself is certain of its efficacy. And it is completely insufficient for helping him to handle his feelings about Mary’s recent passing. So we read Watson in his internal travails, his and his friends’ attempts to help him, and his resolution to finally quit England and his memories altogether. And then a miracle occurs.

In Memoranda Upon the Gaskell Blackmailing Dilemma, on the other hand, we have a rare case narrated by Holmes himself. Like all the cases in The Whole Art of Detection, this case is firmly set not just within the original canon, but at a specific point within that canon. In this case, we see what Holmes was doing in September of 1888 when he sent Watson to Baskerville Hall ahead of him. In addition to viewing Holmes’ rather non-traditional resolution of this case, we also have the opportunity to read Holmes’ own thoughts and feelings about this case, the Baskerville mess, and his thoughts about his friendship with Watson and the fame that has resulted from Watson’s publications. It is a fascinating peek into a mind that we normally only see from the outside.

Escape Rating A: As is clear, I loved this book and had an utterly marvelous time dipping back into the adventures of Holmes and Watson. While many of these stories have been published before, this is the first time that they have all been gathered together. And there are a lot of them, so hunting them all down would be a task almost worthy of Holmes himself.

Just like Dust and Shadow, this collection gives the reader the feeling that we are back there again at 221B, sitting invisibly by their fireplace and listening to them discuss their cases. Like the original canon, these are all cracking good stories, and they run the gamut of the strange, the unusual, the criminal and the bizarre that the originals did.

As a 21st century reader, I have a sense that there is a bit more acknowledgement of the true depths of their friendship than was true in the originals. But I might be mistaken about that. I guess I’ll have to go back and read them again. Something to anticipate with great pleasure.

Review: A Study in Honor by Claire O’Dell
The Pirate King

One thought on “Review: The Whole Art of Detection by Lyndsay Faye”