Today’s picture is Lucifer. He is seriously in a mood, as if you can’t tell from the expression on his face. The reason he’s in such a disgruntled state is, as usual, George. Who is hiding behind my back in this picture playing with Lucifer’s tail. Lucifer’s consent is definitely begrudging, but it is consent. When I tried to protect his tail he whipped it out and batted George with it – again. And again. For all we humans know, this might be Lucifer’s “I’m having fun” face. But probably not. 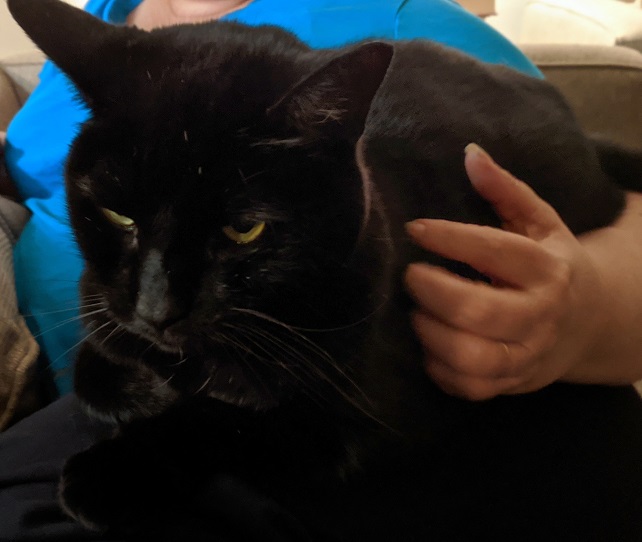 And I have books. In fact, I have several books I’ve been waiting for, as well as a few that caught my interest by surprise. I’m also wondering just how badly the traditional publishing industry is imploding. I have books not due out until well into next year. It feels like the publishers are trying to guesstimate when things will be back to normal, but they’re all using differently calibrated prediction apparatus.

Clearly we are living in, among other things, a prime example of why “May you live in interesting times” is considered a curse and definitely not a blessing.

For Review:
Across the Green Grass Fields (Wayward Children #6) by Seanan McGuire
All the Colors of Night (Fogg Lake #2) by Jayne Ann Krentz
And Now She’s Gone by Rachel Howzell Hall
Better Than People by Roan Parrish
Blacktop Wasteland by S.A. Cosby
Cat Me If You Can (Cat in the Stacks #13) by Miranda James
Chance of a Lifetime (Providence Falls #1) by Jude Deveraux and Tara Sheets
A Dark and Stormy Knight (Victorian Rebels #7) by Kerrigan Byrne
The Doors of Eden by Adrian Tchaikovsky
The Forgotten Daughter by Joanna Goodman
Jackie and Maria by Gill Paul
Jane in Love by Richel Givney
The Killings at Kingfisher Hill (New Hercule Poirot Mysteries #4) by Sophie Hannah
King of the Rising (Islands of Blood and Storm #2) by Kacen Callender
The Lost Princess Returns (Uncharted Realms #5.5) by Jeffe Kennedy
The Ministry for the Future by Kim Stanley Robinson
Moonflower Murders by Anthony Horowitz
The Night Swim by Megan Goldin
Space Station Down by Ben Bova and Doug Beason
Spiteful Bones (Crispin Guest #14) by Jeri Westerson
Spoiler Alert by Olivia Dade
With or Without You by Caroline Leavitt
The Worst of All Possible Worlds (Salvagers #3) by Alex White