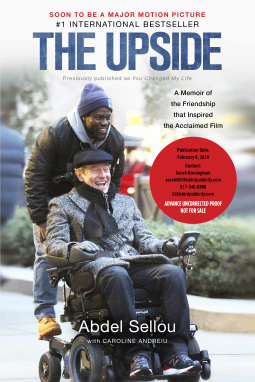 The story of Abdel Sellou's surprising friendship with aristocrat Philippe Pozzo di Borgo has been told and retold around the world-most recently in the major motion picture The Upside, with comedian and movie star Kevin Hart portraying Abdel and his edgy charm. In this appealing memoir, Sellou shows us the real man behind Kevin Hart's smiling face. The book takes us from his childhood spent stealing candy from the local grocery store, to his career as a pickpocket and scam artist, to his unexpected employment as a companion for a quadriplegic. Sellou tells his story with a stunning amount of talent, humor, style, and-though he denies that he has any-humility.

The original title of this book was You Changed My Life, and that’s probably a more accurate description of the contents than the new title. The ways of marketing are clearly mysterious to behold. 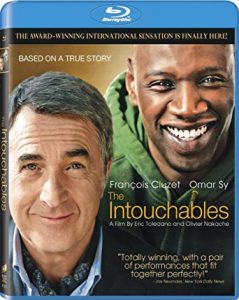 No matter what the title, this book is kind of a cross between a buddy-movie and a bromance. It’s already been a movie, The Intouchables, filmed in France where the real story takes place. And it will be again – the American version is titled The Upside and seems to have been filmed in 2017, although I’m not sure it was ever in theaters. Considering that the movie was supposed to have come out in October of 2017 as the Harvey Weinstein scandal was breaking, and that the movie was produced by his company and the new edition of the book was supposed to be published by his publishing company, it’s not really a surprise that things got a bit, let’s call it delayed.

However, the story existed long before either the movie or the scandal. But this true story was originally told by only one of the partners in this bromance. This version, the one that I read, is told by the other. And it isn’t quite as fictionalized as the original movie seems to have been.

Not that the author doesn’t tell plenty of stories on himself, because he certainly does. And he is not the most reliable narrator, not even of his own life. Perhaps especially of his own life.

In 1993, French businessman (and noble) Philippe Pozzo di Borgo was severely injured in a paragliding accident, becoming a quadriplegic. In 1995 he hired Abdel Sellou, the author of this book, as his “life auxiliary” or caregiver.

Sellou was an Algerian immigrant to France, having been given by his Algerian parents to his aunt and uncle in Paris when he was a child. A child who was young enough to adapt but old enough to remember where he came from. And he was given to people who had never been parents and seem to have no idea of how to be parents. Or perhaps its that Abdel had no idea that rules or limits ever applied to him.

By his own account, Sellou grew up fairly wild on the streets of Paris, becoming a thief and a con artist. He saw himself as the king of his little corner of the world, and felt like nothing could stop him, not even jail. As he was always a completely nonviolent offender, jail mostly seemed like a bit of a vacation. The rules never applied to him.

He met “Pozzo” when he was basically scamming the unemployment office. He came to pretend to apply for that job as Pozzo’s life auxiliary. He ended up staying for over ten years in a job he never expected to take, and remained as Pozzo’s unpaid caregiver thereafter.

All of Pozzo’s rich friends were certain that the conman was there to take Pozzo for a ride, and bilk him out of all the money he could manage to scam. It never happened. 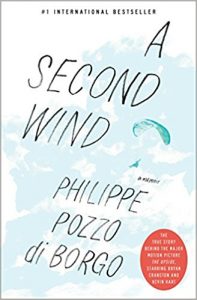 Instead, they formed an unlikely but life altering and life sustaining friendship. This is the story of that friendship from Sellou’s point of view (as Pozzo has already told his version of the story in A Second Wind)

Reality Rating B: The Upside, by whatever title, is a surprisingly quick read. It’s also not a very deep one, because the author skims over the surface of his life, and never seems willing to dive deeply into his thoughts or feelings.

The story that we’re left with is still interesting. Sellou seems to have grown up without a care in the world, or perhaps a better way of describing it would be not caring much about the world or anyone else in it.

It’s also clear that this story couldn’t be told until the statute of limitations had run out on his youthful crime spree, which seems to have lasted into his 20s. Mostly Sellou was a thief and even a bit of a shakedown artist. He was also a successful small-time conman. His goal never seems to have been to get rich, just to get enough to last until the next day. He saw the world as free for the taking, and if he got caught, well, jail seems to have been mostly a vacation.

There have to have been darker parts to this part of the story, but the author never dwells on them. He seems to be a character who always looks on the bright side, and does not worry much if at all about tomorrow.

Going to work for Pozzo was a life-altering event for both of them. Sellou’s ability to always find a bright side seems to have been just what Pozzo needed to keep him going. It’s not that Sellou wasn’t all-too-well acquainted with everything that did not work in Pozzo’s paralyzed body. It’s that Sellou never seems to have let it stop him from pushing whatever boundaries could be pushed so that Pozzo was able to get outside of himself as much as possible, which turned out to often be a surprising amount.

It’s also obvious from the story that the two men moved relatively quickly from an employer-employee relationship to a friendship to a partnership – even if most of Pozzo’s family and friends never fully come to trust Sellou even after years of being there for Pozzo at every hour of the day and night.

That Sellou seems to feel no bitterness at that lack of distrust is surprising. Or it may be part of his ability to always see the sunnier side of every situation, even the terrible ones.

I find myself wondering how some aspects of the story that seem particularly French are going to translate to American audiences. Perhaps I’ll find out if the movie ever shows up on Netflix.