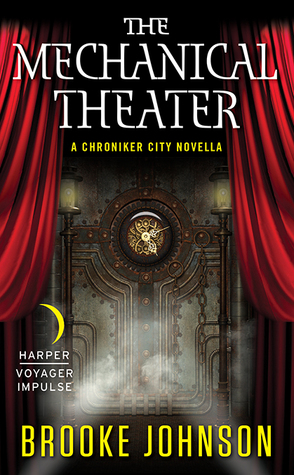 A Chroniker City Novella
Petra Wade’s older brother, Solomon, has always dreamed of being an actor. Instead, he works grueling shifts in the clockwork city’s boiler rooms to help support his large adopted family. When Le Theatre Mecanique holds an open call for their upcoming performance, he decides to audition. However, the only role he is suitable to fill is that of the theater’s custodian.
Leaving the well-paying boiler job behind him, Solomon immerses himself in the theater—watching rehearsals, studying the performances, and working with an emerging young actress to improve his skills. But back at home, his family feels the sting of their reduced income when his younger sister Emily develops pneumonia and the only treatment is too expensive.
Solomon will be forced to make a difficult choice: fulfill his dreams of stardom, or help save his younger sister. 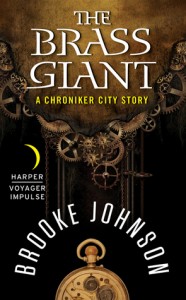 And I needed at least one short book this week. So here we are.

Although The Mechanical Theater definitely takes place after The Brass Giant, the events in the original story don’t seem to impinge much on this one. Petra is a very limited secondary character here, and while Emmerich acts as deus ex machina, he does so from off-stage.

So if you are looking for an introduction to the Chroniker City world, The Mechanical Theater will serve very well.

This is a short and tight little story. It’s all about Petra’s older brother. Solomon Wade voices every dream of anyone who has wanted to become an artist of some kind. In Solomon’s case he wants to become an actor. Not a star, just an actor. It is a burning need inside him that he will do almost anything to fulfill.

But Solomon, like Petra, has to work. The ragtag household that he and Petra were adopted into needs the older “siblings” to work so that the younger ones are fed and clothed. And in the current circumstances, so that little Emily gets the medicine she needs to cure her pneumonia and keep her alive.

Solomon wants to learn the craft he loves, and he has a surprising chance. The manager of the Mechanical Theater will pay him to serve as the theater’s caretaker, and allow him to observe rehearsals as he works. As a supplemental job, it lets Solomon draw a bit nearer to his dream.

But when Emily’s health turns to a crisis, he is forced to give up that dream to labor at double and even triple shifts in the boiler that provides his real income. And he is forced to stay away from the young actress that he has come to care for, leaving her in the hands of man she refuses to admit is beating her.

Solomon will move heaven and earth to get back to his true calling. But he needs a miracle to keep his family alive.

Escape Rating B: As I said, this is a tight little story. It moves quickly to describe Solomon’s situation, get him on the fringes of the world he wants to inhabit, and shows his despair as his dream is snatched away.

His internal conflict over the young actress is heartfelt. He likes her, possibly more. He wants to help her. And he can’t understand why she won’t take the first step to help herself. Until she finally does and discovers that there is more help out there than she believed.

Which doesn’t mean I wouldn’t be surprised to see the ne’er do well back in a later book in this series. He’s the type to carry a grudge.

But in the situation in Solomon (and Petra’s) household, we see just how bad conditions are in Chroniker City, and how grinding poverty affects everyone’s choices and prospects. We get a glimpse of this world at a level we don’t often see, because things don’t get much better during the story. They do get enough money to get Emily life-saving treatment, but it is a one-time fix. As the story ends, Solomon has a slightly better job, and enough time to go back to the theater, but they are still at the bottom. All it will take is one more crisis to send things spiraling downward again. 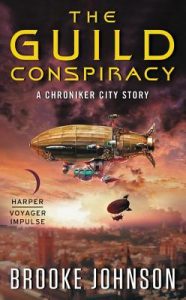 The “mechanicals” of the Mechanical Theater are also not a big part of the story. So this is steampunk for those who are not necessarily fascinated with the trappings of steampunk. All in all, a bit of an introduction both to the genre and to this world. I’m looking forward to more in The Guild Conspiracy.