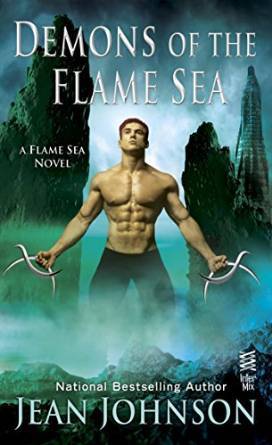 The second thrilling Flame Sea novel from the national bestselling author known as “a must-read for those who enjoy fantasy and romance” (The Best Reviews).  Raised to understand and control advanced magics, the Fae Rii know they must be careful with the wild, abundant energies of their new desert homeland. They must also downplay the awe they inspire in the Bronze Age humans around them. Still, they have managed to create some equilibrium between the two factions, primitive versus advanced—at least, until new outworlders arrive, tipping the scales out of balance.   Strict and power-hungry, the ruthless Efrijt take the phrase “deal with the devil” to a new level. A treaty may be possible; however, the solution proposed will in turn give birth to a new problem: A chaos that will dance its way through all three races trying to survive in the burning heat of the Flame Sea…
Includes an exclusive preview of the next Flame Sea novel, Gods of the Flame Sea
Praise for Jean Johnson   “Johnson’s writing is fabulously fresh, thoroughly romantic, and wildly entertaining.”—Jayne Ann Krentz, New York Times bestselling author   “A fresh new voice in fantasy romance, Jean Johnson spins an intriguing tale of destiny and magic.”—Robin D. Owens, RITA Award–winning author 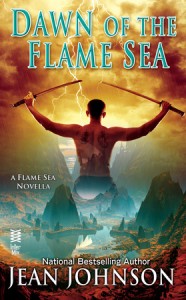 This is the book that Dawn of the Flame Sea should have been. When my friend Lou and I reviewed Dawn of the Flame Sea over at The Book Pushers, we complained that the book was all set up and no delivery – meaning that although there was lots, plenty, positively oodles of worldbuilding – not a damn thing happened. We both like solid worldbuilding in our fantasy and SF romance, but there also needs to be some there, well, there. All that worldbuilding needs to lead to some world unbuilding, in one way or another.

In Demons of the Flame Sea, we finally get to experience what happens on that world that was so solidly (and occasionally stolidly) built. And now it all begins to make sense. And feel worthwhile.

The set up in Dawn of the Flame Sea showed us an advanced civilization from somewhere “out there”, the Fae Rii, literally Fair Traders, who come through an interplanetary gateway to start a settlement on the planet of the Flame Sea. Instead of having the chance to sit back and observe the local Bronze Age natives, they are witnessed the minute they come through the gate, and the cat is out of the bag.

The Fae Rii, led by the Healer Jintaya, settle in the Flame Sea. They bring peace and prosperity, as well as a certain amount of enhanced technology, to the local tribes and clans. They also interbreed with the locals – the Fae Rii find the local humans quite attractive, and very much vice versa. There are lots of children, all raised cooperatively. It seems like a little bit of paradise.

Demons of the Flame Sea takes place 40 years after the end of Dawn. The Fae Rii are very long-lived, so they have not changed much physically. Nor has the one outworlder they brought with them, the man called Ban, a word that means Death in the local languages. Ban’s name is both fitting and ironic. He is a warrior without peer, and very efficiently brings death to any enemies of the Fae Rii, especially anyone who thinks of attacking Jintaya. But Ban is also immortal, so while he deals death to others, he comes back from it himself, over and over and over.

At the beginning of Demons, Ban has been on walkabout for many years, surveying the lands around the Flame Sea. On his way back, he discovers that another group of outworlders has opened a gateway onto this planet. The Efrijit are the opposite of the Fae Rii. Where the Fae Rii trade fairly with their friends and neighbors, the Efrijit always observe the letter of any contracts strictly, and make sure those contracts are written in their favor. Where the Fae Rii are benevolent, the Efrijit are self-serving. They are not particularly warlike, but they are very exploitative. The difference in philosophy between the two cultures is extreme.

The conflict in Demons of the Flame Sea is about both the conflict between these opposing forces and the negotiating of contracts and the jockeying for position between them, with all of the local humans in both spheres of influence caught very much in the middle. Those negotiations are protracted, legalistic, and still fascinating, as the two philosophies battle not with force of arms, but with force of words. It will make readers remember the famous Shakespeare quote, “The first thing we do, let’s kill all the lawyers.”

Escape Rating B+: I liked this one SO MUCH better than Dawn, it’s almost impossible to believe it’s the same series from the same author. Demons reads like the Jean Johnson I know and love, where Dawn was completely and atypically meh.

So, while the worldbuilding is important in Dawn, there’s a rather large glossary at the beginning of Demons. Read the glossary and skip Dawn, unless you are a compulsive completist or a glutton for punishment. There was so little significant action in Dawn that what there is is easily recapped within the pages of Demons.

While there isn’t a whole lot of action in the action/adventure sense in Demons, there is plenty of conflict. The tension between the Fae Rii and the Efrijit is integral to the plot. Their philosophies are so opposed, it is kind of amazing that both sides try very hard not to come to actual blows.

The ways that the Fae Rii explain to their own adherents just how damaging the nature of the Efrijit can be make for a fascinating and still very readable philosophical discussion, and there aren’t many of those in SF and fantasy. 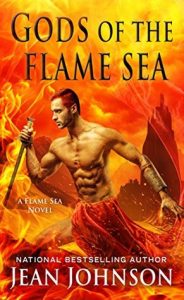 We also see the slow warming of what will eventually become a romance between Ban and Jintaya. Ban is immortal and Jintaya is extremely long-lived. They have all the time in the universe to work their way towards an emotional and physical partnership, and it looks like they plan to take it. It’s a very different way of writing a romance, but it works well in this instance.

The story ends on multiple cliffhangers. The Fae Rii and the Efrijit have worked out a means of coexisting, and are essentially kicking the can of who will control the planet down the road. I expect the continuation of that story and their conflict to be resolved in book 3 in this series, Gods of the Flame Sea.