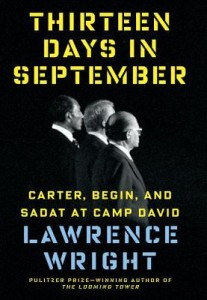 A gripping day-by-day account of the 1978 Camp David conference, when President Jimmy Carter persuaded Israeli prime minister Menachem Begin and Egyptian president Anwar Sadat to sign the first peace treaty in the modern Middle East, one which endures to this day.

With his hallmark insight into the forces at play in the Middle East and his acclaimed journalistic skill, Lawrence Wright takes us through each of the thirteen days of the Camp David conference, illuminating the issues that have made the problems of the region so intractable, as well as exploring the scriptural narratives that continue to frame the conflict. In addition to his in-depth accounts of the lives of the three leaders, Wright draws vivid portraits of other fiery personalities who were present at Camp David––including Moshe Dayan, Osama el-Baz, and Zbigniew Brzezinski––as they work furiously behind the scenes. Wright also explores the significant role played by Rosalynn Carter.
What emerges is a riveting view of the making of this unexpected and so far unprecedented peace. Wright exhibits the full extent of Carter’s persistence in pushing an agreement forward, the extraordinary way in which the participants at the conference—many of them lifelong enemies—attained it, and the profound difficulties inherent in the process and its outcome, not the least of which has been the still unsettled struggle between the Israelis and the Palestinians.

In Thirteen Days in September, Wright gives us a resonant work of history and reportage that provides both a timely revisiting of this important diplomatic triumph and an inside look at how peace is made.

It is fascinating to read history about something you remember, and discover new truths and new insights on events that still feel familiar – especially when those events are still shaping the world today.

Ostensibly, this is the story of the negotiations at Camp David in 1977 between the U.S., Israel and Egypt to provide at least a framework for peace in the Middle East, something that was not achieved and has not yet been achieved. From the perspective of 2014, it seems as if the issues in the Middle East are more intransigent than ever.

A goodly part of this book tells why things haven’t shifted much, or at least not shifted in a good direction, as a result of the events of these thirteen (not an auspicious number) days.

The author does this by interweaving the specific events at Camp David with a look into the contemporary histories of both Israel and Egypt, particularly in the 20th century. He looks behind the myths that both sides have created about the way that politics and history shaped and partitioned the area that is holy to three religions, and how that background of religious warfare has impacted contemporary events.

A critical part of the mix is the author’s triple biography of Carter, Begin and Sadat, to outline the ways in which their personal histories brought them to the summit, and kept them from reaching the kind of over-arching peace that they are claimed they sought. Some of the problems that they brought to the table were rooted in their own pasts, and that they each defined peace, and how that peace might be defined, from radically different perspectives.

Not all the baggage at Camp David came in suitcases – quite a lot of it was embedded into the psyches of the three principals. In many ways, it is amazing that they managed as much as they did.

On top of the personal, this story was also impacted by the three political landscapes at the time – Jimmy Carter staked the prestige of his presidency on Camp David, and probably lost his second term at least partially because he blocked out all other issues in his attempt to make a lasting peace. Begin was head of a coalition party in Israel that had multiple agendas, while Sadat was very much out on a limb politically from the other Arab nations, who viewed his attempt to negotiate with Israel as traitorous.

And yet, the accords signed at Camp David have not been broken in nearly 40 years. It may sometimes be a fractious peace, but there is peace between Egypt and Israel. But for how long?

Reality Rating A-: This historical narrative seemed like a perfect choice for this season that hopes for “peace on earth and goodwill to all” because it highlights a time when peace in a troubled region might have been within reach. That the attempt was made at all is a testament to the desires of people of good will, and yet, that they fell short is also a testament, not just to their human frailties, but also to the drumbeat of ancient as well as modern grievances.

If those who forget the past are condemned to repeat it, then the story of Camp David is about the unwillingness or inability of a whole lot of people with the best intentions in the world who could not let go of a past that everyone remembers differently but all too well.

One of the things that makes this history accessible to the reader, is the way that the author set the negotiations into their historical and personal contexts. It wasn’t just about these thirteen days, but about the histories of the Middle East and the negotiators. Each part had a profound influence on all the others.

But the skill in which the past is interwoven into the day-by-day account of the negiations makes a gripping story, as well as a revealing triple-portrait of Carter, Begin and Sadat, as well as the members of their teams.

This is a work of living history for anyone who is interested in the issues in the Middle East.