I’ve said this before, I am a Librarian.

I read Karen Schneider’s post at Free Range Librarian about a speech made by Jeff Trzeciak, the University Librarian at McMaster’s University in Canada.   My reaction to the post was to go “Spot on, Karen!”, and then to sit through the speech.

Wading past the opening, self-congratulatory section of the speech, as I focused on the purport of Trzeciak was really saying, I realized something really quickly.  I’ve heard this speech before.  Not the exact details–but the gist–out of the mouths of public library directors. 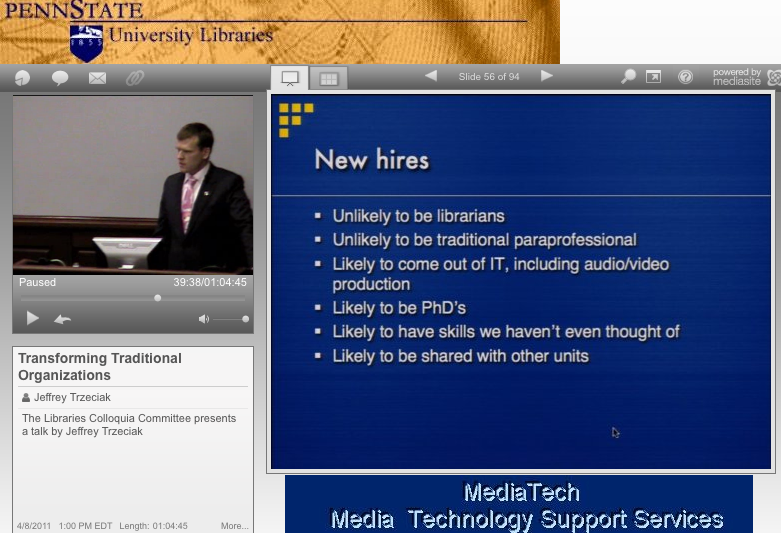 Whenever I hear the variations of this speech, I hear a librarian who wants to say he is different from all the other librarians, and that the way he is going to set himself apart is providing new, edgy services.  And that the other librarians are not capable of providing those wonderful new, visionary services, that only other professions are capable, so he’ll hire staff from those professions into new positions, so he can re-write the job descriptions and get around any institutional regulations that would normally require him to hire librarians or even to retain librarians currently in place.  But traditional library services, what few are needed, like direct public service, are not really professional work according to this mantra, and should be de-valued and performed by trained paraprofessionals who will get slightly more pay (hopefully) to handle patron facing services where every library of every type needs to put its best and its brightest.  But thinking that all the library needs to provide good readers’ advisory services are the shelving staff because they know which books get used most is not the way to go.

Do libraries, all libraries, need to change in response both to economics and technology?  Yes!  Should we examine, and possibly change, the mix of staff that libraries hire in response to those changes?  Yes, we should.  Are librarians capable of making the changes needed and providing cutting edge services and even getting out in front of change?  Hell yes!

This is a case where the quote from Benjamin Franklin comes to mind, “We must, indeed, all hang together, or, most assuredly, we shall all hang separately.”  This school of thought, that only other people can make libraries relevant in the future, is deadly for the profession, for the public, and for the institutions that we serve.  If Borges is right, and “Paradise will be a type of library”, it will be because of librarians and the service ethic that we work by.

ARC-Gate at ALA
Every Silver Lining Has a Cloud

4 thoughts on “Hanging together or hanging separately”