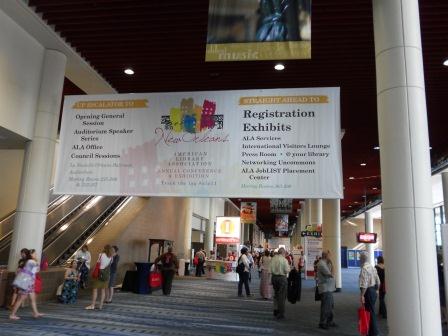 No matter where it is the American Library Association conference always feels like librarian’s old home week. All the people look vaguely familiar, convention centers all look alike, and even the signs are pretty much the same from one year to the next.

Some of the content is even repeated. RDA has been a topic for several conferences in a row, and probably will be for several more. The budget squeeze on libraries has been an unfortunate ongoing theme for too many years. “Doing more with less” is a refrain that is heard over and over.

Moving right along, I spent most of the day in a truly fantabulous pre-conference– “Assembling your consulting tool kit” by Nancy Bolt and Sara Laughlin. For me, the topic was relevant and timely, and the presenters did a bang up job. Setting up as a consultant is just something that goes against the grain of us librarians, we’re all used to thinking of ourselves as publiic servants and not as businesspersons marketing a product, particularly not when that product is ourselves. Nancy and Sara made it sound imminently doable, and their tips from the pros were very much appreciated by this newbie.

When the exhibits opened this evening, there was one book that I was more than willing to carry home  in “dead tree” form, if I could get one. Penguin was supposed to have advanced reading copies of Lev Grossman‘s The Magician King, the sequel to The Magicians, in their booth. I beat a path to their proverbial door as soon as the crowds were let in, and managed to worm my way through the crush to get one. Score!

And ByWater Solutions had a “booth babe” that proved me wrong about the exhibit halls all looking alike. This particular lady could only have appeared in New Orleans. 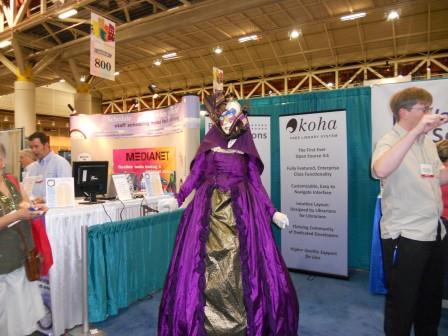