They say no one reads the classics anymore. But they’d be wrong. At least as it applies to ebooks. Or so say the checkout statistics for the Project Gutenberg titles available from OverDrive.

In a recent blog post, OverDrive listed their top 25 circulating titles from Project Gutenberg. Project Gutenberg digitizes books and other media that are out of copyright in the United States and makes them available for free download.

It’s the list of the “biggest hits” that fascinates.

Obviously, sex still sells. Always and forever. Even when no one actually has to buy anything. The number one book on the list is the Kama Sutra. An ereader or a tablet computer is even better than a brown paper wrapper for hiding what a person is reading. The Kama Sutra is referred to so often, in literature and elsewhere, as the original sex manual, that curiousity alone would prompt many people to idly search for it. And if they could borrow it without anyone else being the wiser, many would be tempted to delve into a copy.

Love still makes the world go ’round. Two classic love stories made the list: Jane Austen’s Pride and Prejudice and Charlotte Bronte’s Jane Eyre. And just to show that all is fair in love and war, The Art of War by Sun Tzu is also part of the top 25.

The titles that make up this list represent every genre of fiction. Inspector Poirot’s first case, otherwise known as The Mysterious Affair at Styles, barely makes the list at number 23. But The Secret Adversary, Dame Agatha Christie’s first work starring Tommy and Tuppence, weighed in at number 10. And, one of my personal favorites, the world’s first consulting detective Sherlock Holmes is the second most popular book on the list. Considering that The Adventures of Sherlock Holmes includes the case of A Scandal in Bohemia, where Holmes was bested by “The Woman”, otherwise known as Irene Adler, perhaps we are still on the topics of love and war after all.

For any folks wondering about science fiction, fantasy and/or horror, the answer is yes, they are well represented, not just in numbers, but also by some of the greats. H.G. Wells’ journey in The Time Machine, Bram Stoker’s discovery of the nosferatu in Dracula, and Edgar Rice Burroughs sword and planet fantasy of The Princess of Mars.

Yes, the usual suspects are also on the list. The titles that we all know are assigned for classes like Huck Finn and Tom Sawyer and the Count of Monte Cristo. But people are also taking advantage of the ability to have the entire works of Shakespeare or the Bible (Old and New Testaments) or War and Peace available on their ereader of choice, without having to lug the totality around.

The point is that these aren’t classics because of some esoteric quality they have. They are classics because they are still read.  There is one book on the list I personally wouldn’t touch with someone else’s barge-pole, because it’s not my taste–someone take James Joyce’s Ulysses, please! But most of the books on the list wear their years well.

I’ve never read any of the Tommy and Tuppence books by Agatha Christie. Maybe it’s time to start. 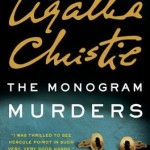 Review: The Monogram Murders by Sophie Hannah and Agatha Christie
Guest Post: Schrödinger’s Ebook Box
The Fiction about Friction
Ebooks in Public Libraries: Whither, Which, How